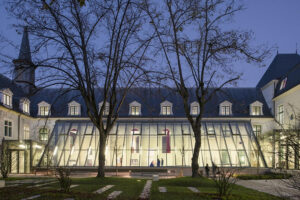 Editor’s note: The Sundial Press, in the next couple of days, will aim to share multiple viewpoints regarding the decision to discontinue Campaign Week. We encourage further contributions from Campaign Committee members, lists, and the wider student body. This can be submitted in the form of an opinion piece or a statement, which can be anonymized.

On Wednesday April 22, at 17h20 CET, hundreds of students from the Reims campus logged onto the Campaign Week Election Results live stream, hosted by the 2019-2020 Campaign Committee (CC), to patiently await the results of the bureau elections for the 2020-2021 academic year. To the shock of all those listening, Anne-Charlotte Amaury, Head of Student Life and the advisor for the CC, informed students that Campaign Week would be permanently discontinued, citing the personal attacks she had received during the week as well as general criticisms of the CC throughout the academic year. The Sundial Press reached out to several members of the Campaign Committee, though some were unavailable to comment, to gather their personal statements in order to obtain an explanation and clarifications regarding this unexpected decision.

Campaign Week is undeniably one of the most anticipated events of the year and an institution of Sciences Po student life. The Sundial Press was able to contact Ms. Amaury following the Zoom session, who in a statement shared that the Campaign Week has been an integral part of student life on the Reims campus since 2014, though at the time she was not the Head of Student Life. She also informed The Sundial that Campaign Week was institutionalized “because the campus was growing and we needed this event to make people vote for their next bureau”; adding that students wanted a series of fun events on campus—and like that, Campaign Week was born. Its cancellation raises many questions about the selection of permanent bureaus and more broadly, it is unsure what impact the cancellation of Campaign Week will leave on student life in the years to come. Ms. Amaury made it clear in the live stream of the election results that there would still be an election which will only include the presentation of the lists and their campaign promises; there will be no more events and no more CC in the years to come.

Kilian Copp, a 2A EURAM and member of the CC, shared a statement about the decision for future Campaign Weeks to be halted. He first explained how his decision to join this year’s CC was based on “the announcement of last year’s election results,” where he felt the 2018-2019 CC had not been able to adequately resolve problems linked to fairness and felt he could be a more responsive member. However, after experiencing the CC for himself, he reflected that his thoughts were “completely unreasonable and selfish,” citing “one’s perception of what is ‘fair’ is akin to tunnel vision: as long as the committee votes in my favour, then the decision is fair… Once you get outside the bounds of exactly what the rules say, that’s when the bias steps in” and this is the point where he feels lists begin to criticize the committee, whether or not the action or inaction was “fair” or not. He further stated that “in hindsight, it was not and is not the campaign committee that has to change, but rather the approaches and attitudes of people listing.”

2A EURAM Enzo Porin also shared a statement with The Sundial, writing as a former member of the 2019-2020 CC, noting that the decision to discontinue Campaign Week “was taken by Anne-Charlotte Amaury as a follow-up to the many problems that occurred during this year’s campaign.” He further added that “this year is not the only one where there have been conflicts,” echoing the fact that the original aims of Campaign Week had been tainted by the overwhelming sense of competition and pressure revolving around the event. However, Porin also cites the exceptional circumstances surrounding the latest edition of Campaign Week also played into the decision to cancel future Campaign Weeks, as “the fact that the campaign took place in a digital format led to a great deal of confusion, which exacerbated certain existing tensions” and that it did not allow for the proper application of rules.

Beyond the structural problems tied to Campaign Week which triggered its discontinuity, Copp addressed the pressure faced by the Campaign Committee and Ms. Amaury. While he spent many hours working on the campaign and debating with lists, ultimately as a student, this role only lasted for a portion of the year and was feasible to maintain, but on the other hand, “it gets tiring for Anne-Charlotte, who has to endure much more criticism, both due to her position as a member of the admin, but also because she has to repeat this every year… I completely understand why she decided to cancel the campaigns from now on. If you were to spend your entire year helping students and bureaus organize all kinds of events, and then you have to get criticized for the work you do, you would have cancelled the campaigns a long time ago. That’s why she decided to cancel the campaigns now, a decision I understand.”

Nonetheless, Porin does “not see the termination of campaigns as the only solution to conflicts,” and concluded that “putting the campaigns back in place, if that ever happens, must be conditioned by the fact that students on campus are ready to see the campaigns not as a bump-and-run where every possible avenue is open to win permanent bureau mandates, but as a healthy place of competition where the most deserving lists, through their work, are the ones that are elected.” This sentiment was shared by Copp, who said that perhaps Campaign Week could return to campus in a “different form, in which lists are forced to focus more on their own material rather than making sure the rules are enforced.” But in their current state, he categorizes the campaigns as “toxic” and as “a cause of stress, both for people listing and people on the committee.”

This year, particularly with the advent of the COVID-19 crisis, has seen a mobilization of efforts directed to increasing discussion about mental health on campus, especially as it relates to the Campaign Week. Students have been vocal about the challenges and stress Campaign Week can create for students in the lists, on the CC, or those who witness it from the outside. Additionally, others have raised criticism about the fact that lists ‘buy’ votes through prizes and events, blurring the purpose of the lists for running. Many, including The Quarterly, have recently raised attention about the importance of holding permanent bureaus accountable, noting that campaign promises often go unfulfilled. Thus, perhaps abolishing Campaign Week will have certain positive outcomes, although the situation is uncertain and no firm conclusions can be drawn as of yet. Ultimately, the apparent structural issues surrounding Campaign Week highlighted by the CC, which have been building up for years, indicate that the decision to discontinue the event might be surprising, but perhaps not entirely unexpected.