COVID-19: When Solidarity Stops at the Border of Refugee Camps 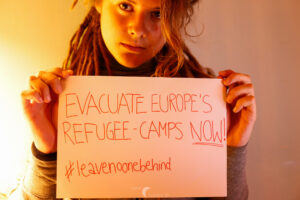 “EU states to take in 1600 migrant children in Greece,” global headlines announced euphorically on Thursday, March 12. In light of the COVID-19 pandemic, Germany, France, Ireland, Finland, Portugal, Luxembourg and Croatia have agreed to take responsibility for some of the refugees on the European continent. “Coalition of the willing,” they call themselves. Because where there is a will, there is a way.

Inhabitants of overcrowded refugee camps on the European border have been waiting for years for this “way”, hastily paved in the course of the global COVID-19 pandemic. This is especially true for the 42,500 camp residents of the Aegean islands, who have been forced to wait for months or even years for their cases to be considered (or in many cases postponed) in a space that was designed to hold only 6,000. The disastrous sanitary and social conditions they are forced to endure have been condemned countless times. However, reports of suicidal children, riots, fires and deaths have aroused regret at best, without triggering concrete political action.

Since the 15th of April, the first children have finally been evacuated from Greek camps – 62 of them to be precise. To take this as a sign that European governments are reconsidering their refugee policy, however, would be an overly optimistic assessment. On the contrary, the COVID-19 pandemic has shown, now more than ever, that the European Union of values appears to be a cynical farce. Indeed, if the EU was seriously concerned about the wellbeing of the camp inhabitants, the entirety of the displaced people would have been evacuated a long time ago amid the unavoidable sanitary crisis they are facing. Instead, they have released a few children – devoid of black beards or hijabs – so as to minimize unfavourable public opinion and populist media wars illustrating the islamophobic assumptions that continue to underpin the treatment and perception of refugees”.

Even an evacuation to mainland Greece of the most vulnerable groups such as children, families or the chronically ill, as demanded by the EU, was rejected by the Greek government on the grounds that there have been no cases (of COVID-19) in the refugee camps yet. Clearly, the preventive policies European countries have been quick to adopt in light of the pandemic do not extend to displaced people. Instead, they advise the inhabitants to wash their hands, to keep their distance and to stay at home. How to wash one’s hands when there is only 3-4 hours of water a day and barely any soap, or how to keep one’s distance when living conditions in the camps are akin to sardines in a can – the answer is a mystery. 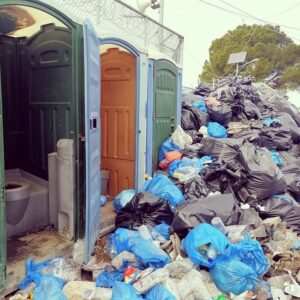 In addition, many NGOs have had to leave the field over the last few weeks. Turkish President Erdogan’s repeated use of the EU-Turkey deal as political leverage has led him to ultimately open the country’s borders. As a result, the Greek desperation of being  left alone in the bureaucratic hell of the Dublin Regulation reached its climax: not only was the right of asylum illegally suspended, violent attacks by fascists on volunteers, journalists, and camp residents also transformed the already tense climate on the Aegean Islands into a life-threatening one. Many NGOs were forced to leave the field and, due to the COVID-19 pandemic, even more were forced to suspend operations. The inhabitants of the camps, however, are more dependent on external sanitary and medical assistance more than ever. In an interview I conducted with a German doctor working in Lesbos’ refugee camp, she stated that the medical staff has “very little means to help” the inhabitants of the camps. Indeed, if a person is infected with the virus, “there is not much we can do except sending the patient to a local hospital.” However, she claims that the hospitals on Lesbos have very few respirators, and thus, they publicly announced to reject any camp inhabitant and prioritize the local Greek population. Now that hardly any help can be guaranteed on the ground, evacuation has become even more urgent. 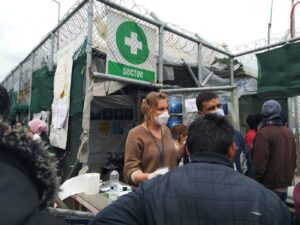 However, Greece is no exception. Even countries that are not affected by the Dublin Regulation, and therefore which do not suffer from overwhelmed asylum systems, do not provide enough protection. In France, for example, 24 organizations such as Médecins du Monde have written an open letter to the government denouncing the situation of refugees as “impossible to put into words.” In particular, they condemn the lack of shelter, which forces thousands of refugees to live on the streets even after receiving their residence permits.

In Calais, for example, the consequences are now disastrous: in the camp that succeeded the notorious “Jungle”, refugees are now almost entirely on their own. In an interview with The Guardian, the director of the organization Care4Calais explains that most of the NGOs present were forced to suspend their activities. As a result, there is hardly any access to medical care or food, and even in case of an infection, it is impossible to call the authorities, as the inhabitants no longer have a place to charge their mobile phones. Indeed, her concern is not unfounded: according to the latest news, the first COVID-19 cases are now being reported in the Calais camp, and the numbers are increasing rapidly.

Beyond the lack of protection, the pandemic serves as an excuse to undermine the rights of displaced persons. For instance, in Mediterranean migrant rescue, the virus is now being used as an argument to deny safe haven to people in distress. On Easter Sunday, of all days, Malta denied 63 refugees floating in the Maltese rescue zone access to their port, in a breach of international law. According to Sea-Watch, after 4 days of waiting, 51 of these refugees were eventually brought back to war-torn Libya by a Libyan fishing boat, while the remaining 12 have died – both in Maltese waters as well as on the drive back to Libya. The UNHCR has highly condemned the government’s actions, claiming that the deaths could have been avoided with an intervention from Malta. To counter the accusations, the government defended itself by arguing that it lacked the capacity to help refugees due to the COVID-19 pandemic, but activists dismiss this as a weak excuse. In fact, this event is only a fraction of a plethora of acts of resistance and criminalization to which private rescuers and displaced people are increasingly exposed. Scenes of lifeboats floating for weeks in the Mediterranean Sea, whose 60 passengers no European country is willing to take responsibility for, have become regular sightings since 2017 at the earliest. 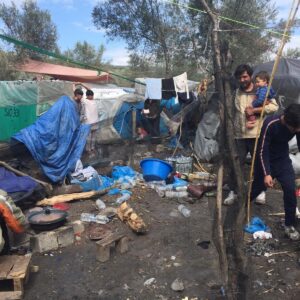 If this pandemic shows one thing, then it is the value of a human life, and how much this value is determined by our passport. In these unprecedented times where solidarity is being praised as the highest asset, it seems to be reserved, once again, only for politically legitimized citizens. European refugee policy increasingly creates the impression that asylum is no longer a human right, but a crime that must be punished. If we are in a position to allow people legally seeking asylum to live in conditions reminiscent of the worst slums in the world which trample all over human rights, it begs the question of what values Europe stands for.

There is still hope, however, embodied by the likes of Portugal. Although it is one of the poorer countries in the EU, it does not lack solidarity. In the wake of the COVID-19 pandemic, the government has decided to automatically grant a temporary residence permit until at least June to any asylum seeker whose application has not yet been processed. Thus, the Minister of Interior, Eduardo Cabrita, publicly announced that the guarantee of civil rights, such as access to social benefits and the right to housing and work, is “the duty of a solidary society.” Only the future can tell if the country will remain an exception, or if it will instead be a pioneer for a Europe of freedom, unity and fraternity that the continent continues to superficially uphold with such pride.

Here are several ways that you can help:

o   Movement on the Ground