Two flags and the wind: A poem in memory of John Lewis

By Matthew Capuano RizzoAugust 9, 2020 No Comments 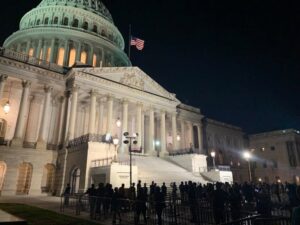 Two flags and the wind: A poem in memory of John Lewis

There were two flags on the capitol that night

One overtop an American hero and the other whipping in the wind above it.

The one above, at times, appeared majestic in the night, lit, as if on a stage

But other times, the flag just curled around its master, resigned to the torment of the wind.

But the one atop John Lewis stood steadfast, regal, sure.

Unconvinced by the wavering of its peer above, it stood unshaken, unbroken by the wind, unphased by the many visitors who had come to see it, who came to see the man it covered.

I imagine having my skull fractured by police. I imagine spending night after night in jail. I imagine taking those long showers and putting on a new pair of clothes just to make me feel human again.

Often, I am like the flag above, staying close to what is comfortable, waiting for a cue from the wind.

John Lewis was the moral center of an immoral chamber. A voice for justice among many content to reap the winnings of injustice.

He saw our flag for what it was. shying away from upholding ideals it claimed to espouse, wavering in the wind, clutching tightly to its pole.

But he never believed. He never truly believed that the flag would stay wrapped around its pole, unwilling to change.

And ever so slowly. Ever so slowly it has. Beyond the yellow letters on our streets, beyond the small changes to police budgets, or corporate statements.

In the streets, in the courts, in offices and communities, the wind is beginning to change.

Which way will we blow?