Responding to violence with hatred only breeds more violence

By Matthew Capuano RizzoNovember 6, 2020 No Comments 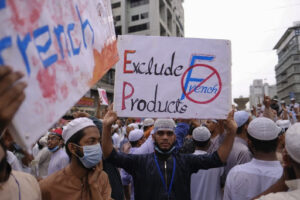 Tens of thousands of protesters took to the streets in Dhaka, Bangladesh to denounce Charlie Hebdo’s portrayals of the prophet Mohammed and the French government’s islamaphobic policies. -Associated Press 30/10/2020

On October 16, Samuel Paty, a middle school teacher, was decapitated in Conflans-Sainte-Honorine by Abdoullah Anzorov, a young Chechen, known to be in contact with terrorist groups in Syria and thought to have become radicalized on social media. Paty was targeted by Anzorov because he showed his class offensive cartoons of the Prophet Mohammed, from the magazine Charlie Hebdo. Anzorov paid pupils €350 to identify the teacher. On Thursday, October 29, Brahim A. killed three people in a basilica in Nice, during a knife attack. Brahim was reportedly as crying “Allah Akbar” and was found with a Quran, two phones, and two unused knives. Men holding knives were also arrested in Avignon and Lyon.

Each of these events is terrifying. The thought of being stabbed, while walking down the street or kneeling to pray, is scary. Many feel that we are under attack. That sacred French values like laïcité are under threat. And, ultimately, that the solution is stopping immigrants that come from ‘violent countries,’ bringing ‘violent ideas’ with them. If we look around, our world seems to be falling apart in the face of an uncontrollable virus and violent extremists. We are now confined for another month. This turn inwards seems natural, born out of the bizarre circumstances of avoiding each other at all costs to prevent the spread of disease. But it would be wrong to think that seeing others as disease carriers or terrorists will get us out of our current crises.

What Macron could have done

Following an event as terrible as a terrorist attack, Macron had two options: reconciliation or revenge. He chose the latter. However, he could have followed other leaders, who, when faced with similar circumstances, chose the route of reconciliation, if only in principle.

The administration of US President George W. Bush is known for many things, including starting the Iraq war and signing the Patriot Act, which gave the government the power to surveil millions of Americans and round up thousands of Muslims, allegedly suspected of terrorism. Bush is not an example of how to respond to a terrorist attack, but in a speech he gave at the Islamic Center the week following the September 11 attacks, he affirmed a sentiment that was greatly needed in that moment. Bush quoted the Quran and emphasized that Islam brings peace to billions of people around the world.  He underscored that “the face of terror is not the true faith of Islam” and pledged support to women who felt threatened to wear a hijab outside of their home. George Bush was a Republican, notably the party that now supports a Muslim Ban that has blocked travel from 11 Muslim-majority countries and hinders more than 12,300 people from resettling and finding work. His words would feel out of place in the party today, but they remind us of something that still rings true: responding to terror with hatred only breeds more terror.

Jacinda Ardern, the newly reelected prime minister of New Zealand, unlike Bush, responded to terror with actions as well as words. After a 2019 terrorist attack killed 49 people and left 48 injured in two mosques in Christchurch, Ardern donned a hijab and consoled Muslim communities in Mosques such as Kilbirnie. Weeks after the attacks, she continued to offer compassion, even attending Friday prayer. Most crucially, however, she also followed up symbolic actions with concrete ones. In June, New Zealand passed tighter gun laws to ensure that weapons will not end up in the hands of white supremacists such as Brenton Tarrant, the attacker. Instead of claiming that the problem came from outside, Ardern continues to reconcile with the country’s racism and New Zealand’s inhumane treatment of the indigenous Māori people.

What he did instead

Macron, however, took the opposite approach. Using the framing “terrorisme islamiste,” the President implied that such acts are reflective of an entire religion in his pledge to respond with “actions concrètes.”

Such actions included closing mosques for six months or longer (sometimes under the guise of the Covid-19 pandemic), while leaving churches open for the celebration of All Saints Day (La Toussaint in French). Between 2017 and 2019, the French government, supposedly completely neutral on the question of religion (un État laïque), closed more than twenty mosques as part of its anti-terrorism policy. According to a 2017 antiterrorism law, French authorities can only close mosques for six months at a time. However, their reopening has to be approved by the préfecture. Therefore, some such as Lagny-sur-Marne have been closed for the past five years. Others such as Sartrouville have been razed by local authorities for being “un foyer de l’islam radical” [a hotbed for radical islam].

Mosque closures were just the beginning of Macron’s anti-terrorism agenda. On Wednesday, October 28, Interior Minister Gérald Darmanin announced that Muslim NGO BarakaCity would be dissolved for “justifying terrorist acts.” Such an announcement follows the disbanding of pro-Palestinian organization Cheikh Yassine for “complicity in terrorist attacks.” BarakaCity is a humanitarian organization that serves more than two million people in 20 countries, mobilizing volunteers after floods in Togo and the first wave of COVID-19. Cheikh Yassine is known for organizing demonstrations against islamophobia, opposing the 2010 French law banning the wearing of the hijab, and opposing Israel’s 2014 bombing of Gaza that killed nearly 2,000 Palestinian civilians and injured more than 10,000. While statements made by the leaders of both of these groups are controversial, there is little evidence linking either of them to violent terrorist attacks.

The consequences of this approach

By treating terrorism as a religious issue and not as a security one, Macron is only fuelling more resentment. Calls for the boycott of French goods are growing in Turkey, Egypt, Qatar, and Senegal. Protests against islamophobia in France have erupted in Bangladesh, Mali, Iran, Pakistan, Somalia and Morocco. France’s reaction to Paty’s murder could have unified its citizens irrespective of religion and decried extremism in all its forms. Instead, by maintaining that terrorism is embedded in Islam and closing mosques and Muslim organizations, Macron has incited further anger and – perhaps – further terrorism.

To be clear, no terrorist acts are justifiable. But instead of reconciling with France’s real history of islamophobia, Macron’s Interior Minister proposed dissolving the Collective against Islamophobia in France (Collectif contre l’islamophobie en France) for being “a dispensary of radical islam” (“officine islamiste qui invite des islamistes radicaux”). The French government is celebrating Samuel Paty as a martyr for free speech with one hand, while closing down religious organizations with the other. Such rank hypocrisy has real consequences for France’s Muslim community who will suffer increased oppression, as well as of us who may bear witness to increased acts of terror.

The Sundial Press is committed to publishing articles representing a diversity of perspectives. As always, we welcome anyone from Sciences Po to write a dissenting response to an article in the spirit of free and open debate.