By Anaïs GaffudDecember 1, 2020 No Comments

Although COVID-19 postponed the United Nations COP26 this year, canceling the “mock COP26” was certainly not an option for RIMUN and SPE, the bureaus organizing this Sciences Po event. Last Saturday, November 21st, 60 Sciences Po students grouped in six different commissions gathered on Zoom to debate environmental issues and discussed possible solutions to the climate crisis. 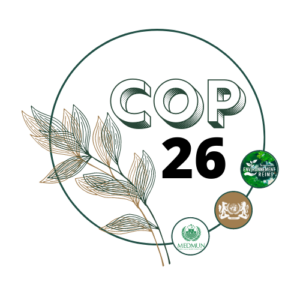 Becoming a United Nations delegate for a day

A MUN (Model United Nations) conference – being a simulation of the United Nations- allows students to act as diplomats representing a given country. Students have to be able to put themselves in the shoes of a delegate whose country may have completely different political views than their own, which may not always be an easy task. Maelys, a 1A Euram who represented Australia on the subject of climate migration, told us, “the Australian government is ‘climatosceptique’ and I am not. So I had to find arguments against climate change and it was honestly difficult because there is so much scientific proof [of climate change].” Overall, the MUN conference is a unique opportunity for participants to inform themselves outside of a strictly academic format. Isabella, a member of RIMUN and organizer of the event, believes that “COP, as well as MUN in general, can provide the opportunity to inform yourself about pertinent issues from the perspective of countries you may have never learned about extensively or even heard of.” 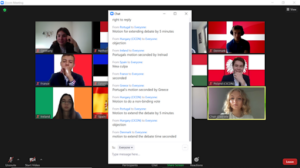 For the very first time this year, the annual conference took place online. Although working in a digital format is no longer something new for Sciences Po students, debates were still very different from the traditional ‘in real life’ conference.

RIMUN and SPE did their best to make the debates as dynamic and entertaining as a live version would have been. Isabella told us that “the adaptation of the conference was abrupt. (…) However, I feel it was dealt with very effectively by all branches of the association and our collaborators.” In fact, many of the very strict procedural rules of MUN had to be adapted to the online format. The highly acclaimed ‘unmoderated caucuses’ that give countries the possibility to negotiate in private discussions now took place in private breakout rooms; passing notes between delegates turned into sending private messages in the Zoom chat, and raising your delegation’s placard to take the floor turned into a simple click of the ‘raise hand’ button.

Some delegates found it difficult to adapt to this new format: “I felt like the delegates in my committee, except three of them, did not really participate as they could if it was in real life”, one participant said. However, others still enjoyed their experience as a “digital diplomat”.  “The chair did all he could to make it exciting and not boring!” said Maelys.

Every year, Sciences Po gets to see its students arrive all dressed up as United Nation diplomats with their chic shirts, ties, and heels, but this year was a little different. RIMUN asked their mock delegates to dress formally “at least from the waist up.”  We will leave the absurd and hilarious combinations of shirts and sweatpants to your imagination!

Another new feature of the conference this year was the partnership with Sciences Po Menton’s MEDMUN. RIMUN saw the lockdown as an opportunity to “further strengthen inter-campus cooperation” as the online format “made it much easier [to collaborate] with MEDMUN.” Indeed, no need to spend time and money traveling, connections between campuses are now possible through simple clicks. They hope this could be the opportunity to organize a MUN uniting all Sciences Po campuses in the future!

After tumultuous debates, delegates managed to find compromises and proposed solutions to the world’s most urgent environmental issues.

Needless to say, the Covid-19 pandemic was at the center of discussions. The European Recovery Committee, in particular, focused on repairing the socio-economic damages of COVID-19 while also transitioning to sustainable economic development. European mock delegates agreed to reinforce multinational cooperation to tackle environmental and social issues. This would take the form of mutual assistance proportional to their decline in GDP.

2020 was also marked by a rise of natural disasters across the world, resulting in a significant increase in the number of environmental immigrants. Protecting the rights of these climate refugees was at the center of the concerns of the UNHRC and Amnesty International collaboration. Its delegates notably proposed to create a special status of ‘international refugee’ for climate refugees and establish an institution in charge of guaranteeing the protection of fundamental rights in refugee camps.

Finally, malnutrition remained a major and urgent issue that had to be addressed. Not only is 20% of the African population undernourished, but climate change is also further hindering development in the region. The environmental crisis undeniably threatens the resilience of the African agricultural system. The mock delegates of the African Committee voted on a resolution that promotes the modernization of agriculture in Africa, encourages the implementation of sustainable agricultural practices, and calls on the UN’s members to provide human and material assistance to African countries struck by natural disasters.

Another successful event for RIMUN and SPE

Overall, the conference was a major success for the RIMUN and SPE teams who managed to show that such projects can still take place despite lockdown. Isabella asserted, “having both organized and participated in the conference, I feel it was a great success. After this, I’m very excited to help organize RIMUN this coming April and continue to be involved in MUN”. The Sundial Press looks forward to the next MUN conference in April, hopefully in person this time!