By Cesar AlmeidaDecember 2, 2020 No Comments 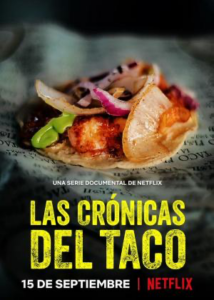 My basic math skills allow me to notice that Covid-19 has a direct positive correlation with hours spent on Netflix, and a direct negative correlation with hours spent traveling. My expertise in Netflix series and my love for Mexico orders me to share with you one of the most well rounded, interesting, and delicious documentaries I watched during my days quarantining in Mexico, and then my days quarantining in France.

Las Crónicas del Taco is a Netflix documentary series comprising two seasons with 6 to 7 30-minute episodes that offer the viewer a taste of the eclectic development of tacos. Each episode narrates the story of a different taco: its role in history, its ingredients, the region it originated from, the culture it emerged in, etc. Not only are the testimonies of the people interviewed in each episode lively and authentic, but the narrator gives a much more integral experience to the viewer by personifying the taco. I probably didn’t get myself across: the narrator is the taco. Each taco speaks to the viewer with its own regional accent and slang, epitomizing the culture it represents.

Directed by Santiago Fábregas, Las Crónicas del Taco gives voice not only to the extremely broad diversity of tacos present in Mexico, but also to the men and women in the kitchen who have mastered these symbols of history, diversity and culture. “The taco is an excuse to talk about many things, among which the characters that cook them.” Enriched by experienced national and international journalists and chefs, this series offers a view of tacos that is not only warm and whole-hearted, but also educational and professional.

Moreover, the series opens up contemporary debates about the nature of tacos. By dedicating full episodes to the ‘burrito’ and the American ‘taco’ (the crunchy, hard shelled yellow tortillas), Las Crónicas del Taco challenges traditional views of the taco; the viewer is offered a broader sense of how untraceable the roots of this dish are, as well as how fundamental it is to the culture of places from Los Angeles, California to Tuxtla Gutierrez, Chiapas.

Las Crónicas del Taco also puts the international character of the taco on the table by presenting testimonies of Mexicans that have exported the art of taco-making abroad. The picturesque adaptations that fellow countrymen chefs around the globe have made to this dish masterfully enhance its sense of mexicanity. In Fábregas’s words; “There are tacos in Japan, Argentina, and surely in Australia. Let’s stop this purist view of tacos and let’s appreciate that people love them all around the world. The fact that a Mexican dish is present worldwide is something to be proud of.”

Las Crónicas del Taco will take you on a journey, laughing along with tipsy Mexicans eating tacos after a night out, celebrating outside the stadium with football fans after a victorious match, enjoying an express lunch with office workers and falling in love alongside tourists tasting our ‘salsas’. Loaded with post-Covid nostalgia of what days used to look like, this series has drawn me closer to the place I come from and the culture I am proud of. I strongly recommend you watch this documentary series, as I believe it will make you fall as in love with my country as I am.