Hit enter to search or ESC to close
CampusCampus LifeCOVID-19Homepage

By Henri JacksonDecember 8, 2020 No Comments

This past year has been hard. Any reckonings that a year of online university would be easier have vehemently been dispelled.

As the fall semester draws to a close, the infamous “November Breakdown” has reached unprecedented heights, students are threatening to strike over insurmountable workloads, and slots with the campus psychologists are filling up faster than Professor Holzheu can go through her slides. It is easy to become suffocated by the devastation that the virus has brought – everyone has had to make sacrifices, not only academically, but personally.

However, it hasn’t all been bad.

Schools around the world have been forced to leap forward, millions of euros have been invested in enhancing online education, and 21st-century technology is finally entering classrooms and being harnessed to make education more accessible, interactive, and diverse. This overhaul – which is long overdue – promises innovation in the academic sphere with lasting implications that will prevail even after COVID-19. As technology changes, universities’ format has to evolve with it. In a year of forced experimentation and enterprise, it is essential to put such changes under the microscope, evaluate them, and reflect on their success.

In this article, I offer a case study of the 24-hour exam format. Is this an innovation that should survive the virus? Today I present to you the big picture – the good, the bad, the hilarious, and the lamentable, the stats, and the stories behind them. In an effort to capture this, I conducted a survey completed by 114 students attending Sciences Po Reims. Here are my findings. 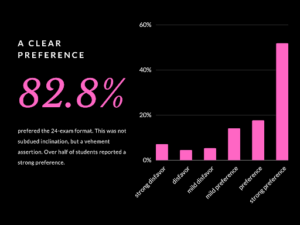 The most unambiguous result of the survey was the indisputable preference that students reported for the 24-hour exam compared to its more time-sensitive counterparts. Not only did a whopping 82,8% of students prefer 24-hour exams, but over half of the respondents reported a strong preference – a 6 on a scale of 1 to 6.

Professors and teaching assistants repeatedly stressed that the exams were designed to take four hours, and recommended spending only that amount of time on them. However, they were not naive: they very well expected that students would not necessarily respect this instruction, and they were not wrong. Only 4,4% of students stayed within the proposed 4 hours. The average time spent was more than twice that, at 9.68 hours. Students clearly took their time. However, it seems they were equally reasonable and did not overwork themselves, or abuse the format. Only 10% of students actually spent more than 14 hours on their essays, and more time spent did not necessarily mean more success. Indeed, we can observe a correlation between those who strongly disfavored the exam format and those who spent the most time working on it: those who reported a 1 out of 6 when asked about their preference averaged over 11 hours spent on the exam. 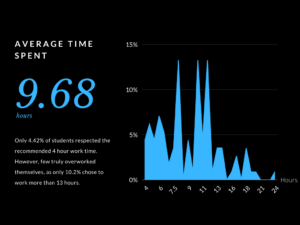 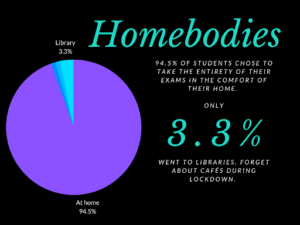 Although cafes and public locations are largely out of the question during a nation-wide lockdown, I would have still expected numerous students to want to escape their tiny rooms in search of a creative spark and a less distracting environment. I could have not been more wrong. Even though libraries were open to students, only 3.3% of students left the comfort of their homes. I suppose I should have also asked how many students stayed in their pajamas all day. Oh well, too late now. 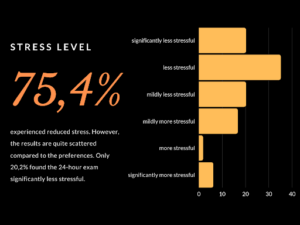 Unsurprisingly, accompanying the strong preference for the new format, an overwhelming 72,6% of students reported reduced stress, both in preparing and taking the exam. This is a big win for the new format. However, this is not the whole story. This experienced reduction of stress was not nearly as unanimous as the strong preference for the exam. Results were far more scattered: the average stress score was 2,6 out of 6, and only 20,2% of students found the exam significantly less stressful, compared to the 51,8% that strongly preferred it. No convincing correlation could be found between the two. In fact, a fair share of students reported increased stress despite preferring the exam overall. In some cases, students would therefore be willing to exchange more stress for this type of exam. But why? There is clearly more to this story.

Testing is not competitive eating

Testing should not be a race against time to cram as much knowledge into our brains as possible until nothing else fits, our heads are about to explode, and we fall unconscious.

Testing is not an athletic test of our ability to stuff our ears, mouth, and nose with dates, quotes, and names, keep cramming until the start of the exam, hold it in, and not gag on it too early. When the clock finally stops and students start writing the paper, they violently vomit this knowledge out in a sloppy mess that not only they are disgusted by, but no teacher truly wants to have to deal with either. And in this process of furious regurgitation, none of the knowledge is truly retained.

The 24-hour exam changes this. It promotes critical thinking, as it allows students to truly consider the question and build solid arguments. They actually produce something of value, something unique, and something they can be proud of. Students are forced to reach a deeper understanding that penetrates mere short-term memory. A good exam, therefore, still requires months of learning and preparation, but rather than learning the trivialities that one can look up instantaneously in the 21st century, students learn to make connections between these facts, how to do research and find valuable sources, and create new ideas that can actually change minds and the way people see the world. Of course, this makes the standards and grading much more rigorous, but is that not a good thing?

The main motivation for introducing the 24-hour format was that teachers feared that internet access would make the shorter exams too easy, and incite plagiarism. Is this not a sign that longer exams allow for students to truly produce valuable content, and reduces plagiarism? This is illustrated by the fact that the 1A economics midterm, a four-hour exam, had alarmingly high rates of plagiarism. There was no such problem with the 24-hour exams. Students prefer this format not only because of reduced stress, but because they are proud of their accomplishments.

Shorter online exams brew the perfect storm for technological disasters to occur. Servers can crash, internet access can flounder, and they often require much more preparation to function seamlessly. Especially given Sciences Po’s high rate of international students, different time zones need to be accounted for. Teachers often have to prepare multiple exams to prevent cheating. The 24-hour exam significantly reduces these technological difficulties. Typing essays as opposed to handwriting them is also a monumental difference. Although some students struggle typing, many can type much quicker than they can write. Typing also allows students to go back, revise, and add arguments, making their essays much more coherent.

Despite the preference for 24-hour exams, this format still requires students to overcome new challenges. Some students reported that a lack of confidence stopped them from actually writing when they had more time. Others described problems focusing. The exam takes students on a 24-hour emotional rollercoaster. That is because it is not only a test of knowledge. It is equally a test of work ethic.

In real life, there are very few situations where you truly have a two or four-hour deadline to produce a work of such importance. You have to fight the forces of procrastination, confront temptations of plagiarism, strike a balance between effort and relaxation, manage your time to maximize efficiency, know when to take breaks, and choose productive work environments. Every day we set priorities and decide how much time we are willing to invest to get certain results. Unlike more strictly timed, in-person exams, the 24-hour exam format embraces this reality. The results are not only a reflection of our knowledge but also of our dedication and our ability to handle these adversities, teaching us important skills for our future.

Some students overcome these new adversities better than others. I have collected some of the most valuable advice from students so that you will pass the next exam with flying colors.

A lot can happen in 24 hours

During 24-hour exams students are not in the isolated bubbles of the classroom environment, giving rise to some quite bizarre test-taking predicaments that otherwise would not have been possible. Here are some of the best…and the worst for your entertainment:

“On the day of the history midterm, I had a train scheduled for 16 o’clock. I thought I’d be done with it by then, but I was wrong and ended up having to submit the essay in a taxi.”

“I wrote my conclusion in the last five minutes of the history exam and I had to run back home to be on time with the curfew.”

“My neighbor’s house caught fire in the evening when I was really on a grind, so it was quite stressful. I was speeding to the end of my essay in order to deal with that – thankfully I was able to finish on time.”

“I had extreme stomach pain and diarrhea halfway through the day, so it is a good thing I was at home because I could continue writing on my toilet!”

“I need to admit that my Dad was my personal coach. He did not work on my midterm but like a trainer, he was there to push me and encourage me to do my best by reassuring me… I felt like a little girl again – that was a strong moment of love!!!”

“I didn’t save my paper and my computer didn’t have enough battery. I had to rewrite all the work I had done.”

“I wrote my entire essay before 3 AM and then got completely smashed, only to realize the next morning I had misunderstood the prompt. I had to rewrite the whole thing during the worst hangover of my life.”

“Let’s just say my boyfriend chose the worst time to break up with me. When I got the paper back, my TA commented that my paper used quite a passive-aggressive tone.”

“I forgot to submit.”

The 24-hour exam is undoubtedly different and requires some trial and error, both on the sides of the teachers and the students. However, at the end of the day, it represents a fundamental shift in the way we approach learning. Students are strongly in favor of the exam and reported reduced stress without the exam in any way being inherently easier.

The difficulty is still in the hands of teachers, as they choose how high to set standards and how strict to make the grading. If the well-being of students is not enough to convince universities to adopt this format for the long-term, then perhaps the elevated academic quality of the papers, its proximity to post-university conditions, or the important skills acquired beyond the mere accumulation of knowledge are more convincing arguments.

COVID-19 has been a challenge, no doubt, but perhaps it finally pushes us toward innovation and reform. I sincerely hope this case study reaches the instructors and administration of the Sciences Po and is taken under fierce consideration. The 24-hour exam format should survive the virus.