Pandemic Fatigue and the Second Wave: Why We Should Continue to Fight, Despite All This 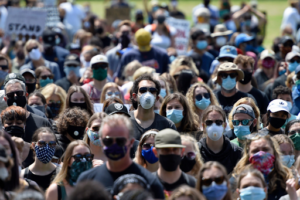 Let’s admit it – I’m tired, you’re tired, we are all tired. There was a time when my past, naive self once imagined that after over half a year of dealing with a pandemic of unprecedented scale, we would now be used to living with this uninvited guest. However, as we flash forward to December 2020, our reality is far removed from these expectations. I often, if not always, forget to wear my mask when I go out, up to a point where it is almost impossible to step out of my building without having to re-enter my apartment to retrieve it. It always takes more than five seconds for me to recognize a familiar face with a mask, resulting in awkward stares and occasional laughter. Of course, for students, the most tiring thing about this pandemic would have to be the zoom classes that force our unmotivated selves to sit in front of our laptops for hours every day, leaving us with nothing but back pain and sore eyes. Everything about living in the coronavirus era is nothing short of exhaustion, but to make matters worse, now is perhaps not the best time to be tired. As re-lockdown measures are globally starting to be put in place in multiple countries facing a second – or even third – wave of the pandemic, including the UK, France, and Greece, each of us is once again trapped in our tiny apartments, with the familiar but not so pleasant feeling of not knowing what will happen next. At this point, it seems as if we are caught in a never-ending cycle, ping-ponging between lockdown and a brief ‘normal’ life. There is no way to avoid feeling worn out in these extraordinary times.

As a matter of fact, the collective tiredness that we are all feeling right now has an official name – pandemic fatigue – and it turns out that a considerable number of people in the world are suffering from it. According to the World Health Organization (WHO) report, pandemic fatigue is defined as “demotivation to follow recommended protective behaviors, emerging gradually over time and affected by a number of emotions, experiences, and perceptions.” The report also states that the fatigue itself is “an expected and natural response to a prolonged public health crisis,” meaning that this reaction is far from being unusual. However, although this exhaustion and yearning to go back to how we once were might be totally justifiable, it will not get us anywhere. In fact, it has already trapped us into this vicious circle of repeated lockdown and unlock periods, and it is highly likely to continue doing so if we keep acting the same.

In order to take a proper look at this phenomenon, we should consider how and why we have come to this pitfall, as we were fully aware of the virus’ danger after going through the first wave. Not surprisingly, the main culprit behind this second wave of the pandemic was collective carelessness or the mindset of ‘it’s all okay now’ that many adopted between the two lockdowns. The bad omens had already begun during the summer holidays, when cases had reduced to a moderate level, and the (lack of) discipline displayed by tourists was evident. In late August, France had already reached a record of nearly 10,000 cases, a surge which was particularly prominent in the southern regions or the go-to vacation spots of French tourists. This result was, of course, far from surprising, considering the staggering number of people who enjoyed the Meditteranean coast without proper distancing measures. Once people came back from their dreamlike vacations and resumed their ordinary lives with the same idle mindset, the country’s cases continued surging, recently setting a record number of over 60,000 that is beyond anyone’s expectations. This number speaks volumes in itself; the lockdown has not been very helpful in reducing the number of cases in France so far, signifying that a lot of people are not only exhausted from the pandemic, but have also decided to go against the governmental measures in place. Getting tired of the pandemic is one thing, but exuding the classic ‘I don’t care’ attitude is another, and quite a grave decision. In a way, we have no one but ourselves to blame for where we have ended up again, as Devi Sridhar, the chair of global public health at the University of Edinburgh, already foresaw what was coming in August with her New York Times opinion piece titled “We will pay for our summer vacations with winter lockdowns.” Ultimately, it all comes down to our past and current behaviors; lamenting the current situation without considering our karma would be pure naivety.

Nonetheless, I am not saying that we should deny the pandemic fatigue and force ourselves to complete isolation. No matter how much we blame our past selves, the one thing that does not go away is the staggering reminder that we are now suffering from utter exhaustion. This leads us to the most challenging question; how can we fight to stop the pandemic while still seeking to keep pandemic fatigue in mind? Needless to say, a suitable way to relax and reinvigorate ourselves is needed, but that does not necessarily mean breaking all regulations. As much as we should accept the ‘new normal,’ the current situation is not normal, and it never will be. The only way to break out of this nightmare and win back the real normality that we all desperately want is to accept the ‘new normal’ for now and comply with the strict measures. Every race that we have in life follows a certain pattern – at some point, it feels like we just can’t take it anymore. Writers stumble upon writer’s block; marathon runners are bound to hit the wall in due time.

Now is that very moment for all of humanity where we have already run out of breath, to the point that it almost seems impossible to continue the race. However, we must remember that this is not the end of the marathon. We cannot even say for sure when that end will be. Whether we like it or not, humanity has no choice but to finish this race till the end. Whether we choose to run right now and suffer less time in the future, or sluggishly continue this tiring game until we are tired to death, is entirely up to us.  All there is left for us to do is to simply make a choice between the two – what would be considered as a smarter choice in the future seems quite obvious to me, to say the least.