Citizens and the City: Transportation

By Tomas ArmalysJanuary 30, 2021 No Comments

Most cities today have failed to adapt to the needs of human beings. The credit for this belongs to early 20th century modernist city designers, such as Le Corbusier. Their belief that a human functions as a cog in the machine, rather than a part of an intricate natural system, has led to the creation of the cities that we see today — cities where specific districts usually serve a predesigned purpose. 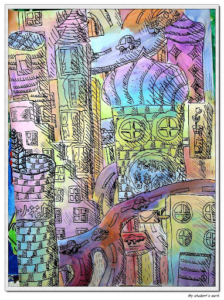 The everyday bustle of life generally takes place in the residential district, which varies from a suburb, to a banlieu, to a mikrorayon – depending on where you are from. Work unravels in the downtown area, the prime location for corporate office space. In between the two you can typically find the intermingling of a living and working atmosphere. The role that each citizen plays in such a stratified modernist utopia is heavily influenced by their socioeconomic status  or cultural background. Fortunately, city planners have realized that designing a city in this manner creates more problems than it solves. This has led to the move towards a type of planning which emphasizes functional, multipurpose neighborhoods. Nevertheless, more positive radical steps are needed to create cities that suit the needs of individuals, all the while striving for environmental protection, social cohesion and sustainable economic growth. With this being said, it is worth investigating what a contemporary utopia could look like.

In the first part of this series—Citizens and the City—I will focus on transportation and the importance of reducing the number of cars on the road, a change that benefits drivers and non-drivers alike.

Traffic jams are the perfect time for philosophical pursuits. Being immobilized in a sea of cars allows one to muse about profound questions like “where is everybody going?”—often followed by equally calculated answers such as “if someone were to only get these people off the road.” Such an argument becomes vivid through an emotional expression of words rarely found in classic literature. The answer to these ponderings lies in the very words of the amateur philosopher. Reducing the number of cars on roads plays a crucial role in shaping the future of transportation, with the spotlight then falling on tried and tested alternatives.

The best way to reduce the amount of vehicles clogging up streets is to encourage walking from point A to B. This falls on local councils, who must enforce strict regulation when it comes to designing neighborhoods (Speck, Jeff. Walkable city rules: 101 steps to making better places). Newly developed multi-story residential properties should, as a rule of thumb, dedicate first floors to shops and restaurants in order to make streets lively and promote walking as a viable alternative to driving around. Cyclists must also be made an integral part of the city. Though it might be tempting to write off surplus white paint and do a cheap PR photo op for one’s next mayoral campaign, proper cycling lanes are needed. This can be easily done through the careful integration of roads, cycling paths and sidewalks, where a clearly marked and slightly elevated cycling lane acts as a divider between the street and sidewalk. These changes could drastically affect the atmosphere of a neighborhood. Streets would become dynamic, with bars and restaurants serving as hubs of social life. Care and attachment to one’s place of residence could be fostered, with shoppers not having to leave their block to grab a few groceries. Moreover, with the ability to cycle around and between neighborhoods either for work or pleasure, citizens could come to know their neighborhood, while also benefiting society through lowered carbon emissions and a reduced need for healthcare and its associated costs.

However, while walking and cycling are feasible alternatives to driving, this might not always be possible in every city. Luckily, public transport can become a viable alternative when it comes to carless mobility. By implementing public transit that operates across the whole city, no matter the income bracket of the neighborhood, some socio-economic issues could also be alleviated (Hulten, Michel van. Fare-Free Public Transport – FFPT).  Lower income workers, students and the elderly gain mobility due to the fact that a bus ticket is much cheaper than the cost of a  car and its maintenance. Moreover, incentives to use this system can be implemented in various ways, for example through initiatives such as discounts for children and students. Here it is important to note that fare-free transport can also act as a great boost to citizens’ quality of life. Some might be quick to rightfully call out that nothing is ever really “free,” yet it is worth having a look at the Estonian capital of Tallinn. Registered city residents can use public transport for free, since the system is covered by income taxes collected from its residents. It is worth pointing out that there are some shortcomings of such a system: the deputy mayor of Tallinn points out that if a city’s public transport is heavily dependent on ticket sales, there might be difficulties with implementation. Moreover, due to increased usage, the busses and trams tend to become more crowded, thus reducing comfort. Nevertheless, traffic on the streets of Tallinn has significantly decreased, the elderly have the possibility of maintaining an active social life and those living in a precarious economic position can better access services. That is why even if there might be costs to expanding public transport, the added benefits can have a much wider net benefit that positively affects the whole community.

It must also be pointed out that getting rid of cars completely, while a dream for many environmentally-orientated people, is exactly that—a dream. That is why, as cars remain one of the key pillars of transport, alternatives to ownership need to be offered, like short term car rentals. This is already done in many European capital cities via car rental apps. This often encourages users to carshare, since the user in most cases is charged for the distance driven and for the length of time a car is used. This greatly reduces the need to own a car, especially for people who might typically use it only a few times a month. This system of short term rentals benefits everybody on the road. The streets become less congested and, according to a study carried out in China, this can also open up more parking spaces, reducing the need for aimlessly driving around a block in hopes of finding a parking spot (An, Hai, and Lujun Gu. Main Success Factors for Developing Car-Sharing in China). It is also beneficial for the user, since the insurance coverage and refueling is included in the total price, which can easily be calculated before the trip, and the car can be returned to any part of the city in which the company operates.

It is clear that a city which does not give priority to cars benefits the individual as much as the community. While being environmentally sustainable, this setup also keeps citizens healthy, encouraging them to be more social and improving access for citizens of low socioeconomic status. While cars might be needed in some cases, for most they are a luxury. Therefore, while implementing these aforementioned changes, the myth surrounding the car should also change. It does not grant freedom, but instead is a chain, preventing meaningful change.