Hit enter to search or ESC to close
CampusCampus LifeHomepage

Serving during a Pandemic: An Interview with the EURAM Student Representatives 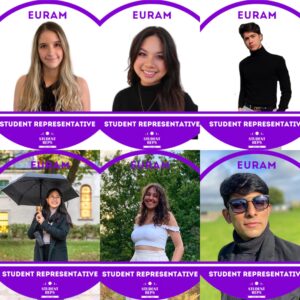 Editor’s Note: This interview was held during first semester. Responses have been edited for length and clarity purposes.

At Sciences Po, few student positions serve as central of a role as the Student Representatives do. These representatives serve as a liaison between our student body and the Campus Administration, advocate for particular individual student issues, and act as an initiating force  to improve student life.

In the EURAM program, three representatives are elected each year for a two-year term, creating a team of six Student Representatives. The 2A Representatives for the 2020-2021 year are Jasmine Ashley-Dy, Facundo Majul, and Alessia Russo. First-year students took part in an election process of their own this past october, including a week of campaigning and a broadcasted debate. The three top candidates, Kaitlyn Jeon (22%), Nesrine Gharbi (16%), and Chirag Bansal (15%), were elected.

During this unprecedented school year, the role of the Student Representatives has taken a new shape but has become more essential than ever. We interviewed Jasmine, Chirag, and Kaitlyn to hear about their experiences serving in this position, and how it has been impacted by this year’s unique challenges and new academic format.

Newcomers to the Role

We first asked our 1A Student representatives how the first few weeks of their year have gone so far. Chirag explained that this year, reps have not had the chance to engage with many students in person, but there have been many ways to connect with the student body online, especially through group chats. However, the lack of direct communication with  students has been a challenge. “Because we haven’t personally met our classmates, a lot of people (…) don’t know how to approach us with issues, and information reaches us [very indirectly].”

Kaitlyn had a similar point of view. “We really encourage people to reach out to us, because that’s our job, but when people don’t reach out, it’s hard to help them.” To her, the biggest challenge coming to the position has been learning boundaries and being understanding in terms of “which subjects are off-limits for us to touch or try to change.”

Kaitlyn and Chirag also reflected on what they had learned from the election process. Kaitlyn recalled that “there are many different ways to achieve something, so you should approach it in the way that feels right to you, being genuine and authentic.” For Chirag, the key takeaway was the concept that “less is more.”

Turning the Page to a New Academic Year

Jasmine, our 2A Student Rep, discussed the differences she has seen in the role this year compared to previous semesters, and how the current situation has expanded the position. “I think the need for a liaison has always been around, but especially when it feels like decisions are constantly being made, that communication and that need becomes [especially important].” According to Jasmine, “now it feels like every week brings a new surprise, a new challenge, a new thing that we’re dealing with, so it’s a little more improvisation [than last year], I’d say.”

However, Jasmine felt like this year had been smoother overall for her and the other 2A Representatives than last year. “I know we kind of threw in the first-year reps into the deep end of things,” she laughed, “but I think navigating who does what in administration, both on our end and the Paris end, and also knowing how to be effective – knowing what battles are worth fighting – has been a lot better this year.”

The integration of the 1A Representatives into the team was especially abrupt this year. “We were directly immersed and submerged under-water,” Kaitlyn reflected. “We had a Rep dinner as soon as we were elected and had a meeting with the Director a couple days later. So, at this point, we’re definitely part of the team already, feeling like we’re in action.” Chirag added that a large part of learning came through hands-on experiences. However, our representatives still found time to honor some key traditions, such as their annual integration burrito night. “Last year when we were elected, the 2As made burritos for us, and the year before that they made burritos,” Jasmine explained. “It’s always the first meal! We got to know each other as people, because, you know, we are Reps but we’re just students first, trying to help out.”

What does a Student Representative “do”?

Jasmine laughingly explained, “I like to tell people that being a Student Rep is a combination of being a firefighter, a therapist, and a lobbyist.” To her, a large part of the job is dealing with crises. “You might get an email from Sciences Po [in] Paris and suddenly everything has changed, and you get 30 messages afterward and you go, ‘ok, how do I take all of this and deal with this crisis that’s come up?’” The role of a Student Rep also consists of listening to people and validating their concerns and feelings. “Especially this year (…), mental health has obviously been very topical. It’s about being there for people. And of course, there is a line between supporting your peers and being a mental health professional, something that none of us are, but a lot of the time it’s just about supporting your peers and saying that you feel the same way or contextualizing to let them know that they are not the only one dealing with something.” Finally, there is what Jasmine views as the more “strategic” aspect, including lobbying and organization. “How do I take this information that I have and transform it into something helpful?”

For Chirag, to be a successful Student Representative, you need to be both very approachable and very available. “Sometimes you just get a text at 12:30 am asking, ‘are you up?’” he laughed. Chirag also explained that responding to these situations becomes easier as time goes on. “A lot of people’s concerns are large in number, but when you look at them, they’re almost the same. Everybody is usually concerned about the same things, so the first time you have to be a little spontaneous and improvise, but after that, you know [what to do].”

Kaitlyn added that being a Student Representative is a bit like being every student’s friend. “You’re listening to other people’s problems, empathizing with them, and trying to find a solution… that’s literally what friends do!”

Contemporary Problems at Sciences Po and Solutions to Face Them

Our representatives agreed that mental health has become one of the central issues for the student body. “On the official side, I know it can feel very bureaucratic and exhausting, but letting your class representative know about an issue, who will let the academic advisor know, is the best and most direct way to get something done” Jasmine affirmed. “On the informal side, I think it’s about giving as many resources to people as possible and reducing stigmas about accessing them.” She explained that taking care of yourself is especially important during confinement, and students shouldn’t feel afraid to lean on their peers for help when they need it. Kaitlyn and Chirag added that some first-year students could find the situation especially isolating if they are living on their own, but that associations like the BDE are looking into ways to allow for students to meet in a virtual format.

Jasmine and Chirag also warned students to keep an open mind when it comes to platforms like YikYak, which can tend to portray situations in an especially negative light. “On one hand, I think it’s such a beneficial platform in terms of giving people the ability to share what they wouldn’t be comfortable sharing to everyone,” Jasmine added, “but I’m not sure it’s always the same [when it comes to] discussion.” The representatives pointed out that it can be easy to dehumanize others in comment sections, and that a quick phone call could resolve some of these issues much more efficiently.

The representatives also agreed that their good relationship with the administration has made fighting conflicts easier. “From the 1A perspective, I think the administration is really approachable,” Chirag explained. Meanwhile, Jasmine confirmed that “regardless of if we agree or not, they’ve always been open to hearing our thoughts and suggestions. I’ve never felt like they’ve been invalidating; they’re always open to discussion.” The representatives reminded us that our administration is a tiny team dealing with an unprecedented number of students and encouraged fellow students to book office hours with an admin member if they feel frustrated with something.

Get to Know your Reps!

We also asked our representatives a few questions to get to know them, such as what they do to clear their head and take a break from work.

Jasmine:“I know it’s very classy, but I am a complete fan of any trashy reality TV show. *laughs* That and sitting down with my colocs around some Ben and Jerry’s is my best way of unwinding from a day.”

Chirag: “A lot of reality shows or sitcoms, and probably some good food. I also feel at best when I’m meeting people and talking about what they did. That’s the most refreshing thing.”

Kaitlyn: “I let myself sit and do nothing for a while. It’s important to break free from the demands of the world for a while!”

And also, what superpower would they choose?

Jasmine: “I would love to be able to shape-shift. I think it would be so fun to be able to experience the day as an ant or something very random. And then that way, you could maybe also get other superpowers. I don’t know the semantics of shape-shifting, but if you shape-shifted into Spider-Man, maybe you’d get his powers!”

Chirag: “I would love to be omnipresent. Most of the time, I want to be in so many places at once. There’s too much happening!”

Kaitlyn: “I would probably choose mind reading. Maybe this is a Student Rep thing, but I like to know people’s honest thoughts. I hope that doesn’t sound too invasive!” *laughs*

To finish, the representatives shared their advice for Sciences Po students going through this unusual semester. “Don’t overburden yourself,” Chirag suggested. “As a 1A myself, I understand that there’s this pressure of being new to university and wanting to do well, but you can still do well without taking that much stress.” Jasmine and Kaitlyn reminded people to reach out to the wealth of people on campus whenever they need something. Kaitlyn concluded,“the admin and professors that seem so distant in your eyes are humans that work with students and young adults because they like it. They will understand your struggles and empathize with you to ensure you have a good university experience. Everyone is on your side!”