By The Sundial PressApril 7, 2021 No Comments 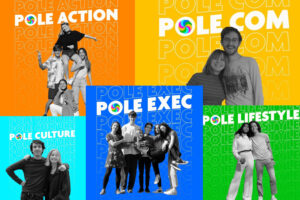 All campaign list interviews were conducted on Zoom by writers of the Sundial Press. To ensure uniformity across interviews, interviewees were given the same amount of time to answer questions, and lists for the same permanent bureau (ex. the two BDA lists) received the same questions. The interviewees had not seen the questions they would be asked, and a member of the campaign committee also assisted and supervised all interviews. Although the interviews have been edited for clarity and concision, everything written was said by the list members.

Liubov NAZARENKO: We’re running just to bring SPE down to earth, finally, in all senses; we’re trying to engage more people, and make it accessible and appealing to everybody. Our list this year is all about tackling problems from different perspectives and angles, starting from a big range of institutional change such as the carbon emissions on campus, following with small things with the Sciences Puces project, which engages basically people and their small habits in everyday life. When we buy fast fashion we don’t think about polluting, we don’t think about harming the planet because it’s just a thing we do culturally, but with the Sciences Puces project you can go to the Instagram platform and buy this already manufactured white t-shirt from somebody who just doesn’t need it anymore. This creates a circle of helping each other, first and foremost, and also not using but reusing and just being in all of the senses down to earth.

Victoire PROVOST: We’re really trying to make sure that SPE isn’t just the members of the list but really the entirety of the campus.

Clara STAUBER: This is why we are going to launch a Friends of SPE project, we would like it to be something that impacts everyone, and not something specific to the list. We are pretty diverse, we have different approaches and experiences with the environment, we have pretty heterogeneous points of view, and this allows us to have projects that are pretty open to students and, as such, not only specific to the list.

Liubov: As Clara mentioned, this year we’re launching, as a list, a project Friends of SPE. If you think about it, why hasn’t this been in place before? Because it just makes sense to engage more people, not limit the impact and environmentalist action to 16 people on the list, but to make it as widespread as possible. At Sciences Po, we’re all studying social sciences, so we can agree on the fact that there will be no society if there’s no environment. We all need to do everything possible, not only 16 people, but everybody, to make efforts to sustain this society and to actually not fail our small environmentalist mission.

Clara: We want to make it so that everyone is able to integrate this environmental reflexion in their daily lives, so that it’s not something excluded from our actions or something that’s set aside. We have to include this in campus life.

Meja RAMANANJOELINA: We would really like for Science Pistes to feel touched and really into the projects that we’re going to put in place, and for them not to feel like spectators but truly be actors.

What would be your propositions to enable making the campus a more environmentally-friendly place?

Meja: So I’m in the lifestyle pole and with Kilian, we really thought about trying to put in place easy things that will last a long time. For example ways to recycle paper, make vegetarian foods more accessible, make alternatives easier to use, by for example doing markets every two months or once a semester to make the students really feel involved, continuing the organic baskets that the second years have already done since last year. Really let students see that they can do it, and that these are things they can do on their own level.

Victoire: To add, I’m in the action pole, and what we’re going to try to do is take more concrete actions to try to involve the campus and really link it to the city of Reims, whether it be local associations or others. For example, we’re going to try to primarily work with the recycling center and with the association that handles the installation of composters. Also we don’t necessarily want to restrict ourselves to our own pôle, we really want to try to ensure that this year – and the years that follow – they really work together and do common actions, for example focusing on vegetable dishes and the crous.  We would really like to work with the head of sustainable development on campus, I think the position currently vacant. In any case it would still be good to be a team, and ensure that these projects which are presently just drafts really come to life next year and we really engage the campus in long-term maneuvers. Not just the people in our year, but try to kickstart the first step of sustainable action, and have  the people that’ll take over be able to continue, relaunch and ensure that these projects don’t disappear and continue in the long run.

Liubov: As Victoire mentioned, we have some exact project. For example,  negotiation with CROUS, in terms of what they serve, in terms of the way they serve it, sometimes being not environmentally sustainable. But all of our projects are in some sense connected to making the campus more sustainable. It’s all about Friends of SPE when you engage more people who then therefore make others become more sustainable. It’s about Sciences Pistes, it’s about compost for example and making it enter the culture, because until then there was a certain stigma about this whole phenomena of compost being a bit uh, not accepted in society.

What elements make you, as a team, special and ideal for the future running of SPE?

Liubov: I can start with the fact that we are honestly diverse. Everybody says that every year, but look at us, all coming from different continents, and from different cultures. Absolutely  different backgrounds which make it an experience of building this year’s SPE list unique in terms of bringing things from different parts of the map into one place on the Reims campus , in SPE. What’s really important this year on our list is that inter-pole communication, because beforehand the poles were really separated. This year we’re trying to change this and make communication the key in our campaign.

Clara: We all have different approaches to the environment and different expectations towards SPE. Some of us are involved with local associations on a city-wide scale, which allows us to have much more communication with that level. There are some who want more institutional changes and others who are more focused on working with students.

Victoire: What is really fulfilling about all of these perspectives and different points of view, is they always allow us to continue to learn about parts of climate action that we didn’t necessarily know about. Some people are more informed about different subjects, or involved in different associations. Or just discovering the perspective of their respective countries. This really makes cultural diversity enriching for all members of the list.

What would you say are the three biggest environmental concerns on campus that your list would like to address?

Clara: The crous, for example, lacks in vegan alternatives, and if there are any, they are limited. There are even eggs in the vegetarian sandwiches, so vegans can’t eat at the crous, and this needs to be changed. So this would be our first approach. Another way would be more communication with students, from the school and from us, to avoid any kind of distance that exists in the communication of events and the environment in general. This is something we would like to address, as well as increasing communication with the city of Reims.

Victoire: If I may add, we’d also like to focus on how we sort waste. So really on a campus level, and we’d like to include it in a reflexion on a city-level in Reims. We’d like to make access much easier and fairly “systematic” for as many students as possible. This is why, for example, we would like to set up composters in student residences, which would benefit not only Sciences Po students but all students who come to these residences because there are many, and not all if them go to Sciences Po, so if in addition we can allow more people to benefit from and learn about this situation, it’ll be win-win.

Meja: Regarding the way people consume, we really wanted to change this, for example democratising local consumption, organic consumption, and it’s also one of the goals we would like to reach next year.

Liubov: As you see we’re trying to tackle the problem, again, from different angles, from different ranges of solutions, but we can honestly go from the small solutions to show that this inevitable transition is not hard. It can actually bring you genuine benefits like vintage clothes. But we’re also trying to tackle the problem from an institutional perspective. Our objective at some point is to work hard in hand with the administration of Sciences Po Reims campus to make it a zero emissions, zero-waste campus, which is not easy, but we’ll hope to get to achieve this with the Sciences Po Tomorrow project, which was already launched by this year’s SPE.

Clara: To come back to the role of the culture pole that I represent, when we talked about turning the campus more green, this is also through students and their ways of thinking. Our role is to inform students and to initiate conversations. There will be regular debates on current environmental events, etc. We are also going to launch something called Project Technique, which involves everyone discussing concrete political solutions to help change things. This would be our role, brainstorming with students abound these environmental reflections, because we can’t exclude any conversation or political decisions, especially.

Victoire: We really hope that by the end of this year and next year we’ll be able to organize concrete actions, create and host cool events that are vibrant, and that we’ll be able to enact change through these. The current situation makes this a bit burdensome, considering the fact that it’s been a year since we’ve really been able to hold events on campus and interact with students, so we’d really like to set up events, markets, to be able to involve as many people as possible. Our main goal would be to educate as many people as possible, and we really hope to do this all in person and see everyone again next year.

Liubov: As Victoire said, the past year has not been easy for anybody.  COVID has damaged lots of joy and lots of interactional parts of the Associational life. But this year, given the circumstances, given the uncertainty about what’s going to happen next, what’s gonna come next for the pandemic situation, we’ve transformed most of our projects into online equivalents, Sciences Puse will be a totally online Instagram platform. So all of the students of the Reims campus can actually be part of the solution, and, as cheesy as it sounds, not part of the pollution.