By Clara ZibellDecember 6, 2021 No Comments 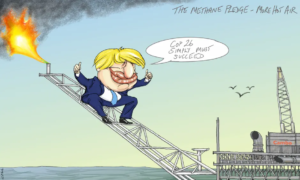 The climate summit was part of Boris Johnson’s agenda to place Britain on the map as a pioneer in climate change. Although you might have read all the possible articles on the Glasgow conference and think you might know everything there is to know, we wanted to give you the opportunity to ask him your most pressing questions. We’ve compiled a list of your most Frequently Asked Questions for you to read:

Q: In the few weeks since the COP26’s end in Glasgow, many students, scientists, and citizens feel that the conference was overall “disappointing,” and did not live up to expectations. What can you say about this?

A: I would disagree actually, I think we made great progress! We made very good progress on trees, and we also spoke of coal, cars, and cash. I am cautiously optimistic that we might actually reach our targets for 2030.

Q: What do you mean by cautiously optimistic?

A: I just mean that there might eventually, potentially be hope for future generations.

Q: And what about current generations?

A: They’ll live too.

Q: What measurable goals have you set for 2030 and how do you plan to achieve this?

A:  We want to remain under the goal of 1.5C warming by then. This means rapid, deep and sustained emission reductions. We’ll look back at COP26 as the moment humanity finally got real about climate change.

Q: How do you plan to go about to take this rapid, deep and sustained emissions reductions ?

A: We are reviewing the goals of the Paris Agreement.

Q: How are you reviewing these goals?

A: Every year we will hold a very high profile meeting to discuss the targets and see what we can do with them.

Q: So your plan of action is to keep talking?

A: Yes. But we’ve also got the data, the science, and the funds to back up what we talk about.  The most important thing is transparency.

Q: What other successes are worth noting?

A: In a side deal struck with Australia and 123 other countries, we have decided to stop deforestation entirely by 2030.

Q: Why are you waiting so long?
A: Hopefully this will give us enough time to build up heaps of supply for the future! We need to plan ahead for our green recovery.

Q: How can the United Kingdom pave the way for other countries?

A: We want to create a Global Britain and Make Britain Great Again. We will create jobs in the clean energy sector and stimulate growth in the economy.

Q: Is that why you gave the green light for the opening of a new coal mine in Cumbria or the Cambo oil field in the North Sea earlier this month?

A: We are thinking in the long run. This will allow us to create jobs to make cleaner steel, needed for infrastructure for clean technologies. We need to put Britain first. This is also part of the green recovery.

Q: Can you give an example you are proud of where countries successfully collaborated on an issue?

A: When drafting the Glasgow Climate Pact, India successfully managed to fight for a “phasing down” of coal, rather than a radical “phasing out”. This lets us open our new Cumbria coal mine next year!

Q: Of all the 40,000 total delegates at the conference, which country had the largest number of representatives?

A: The oil and gas industry…

Q: How can you sleep at night knowing all this?

A: I actually have no trouble sleeping at all! I usually make myself a relaxing infusion to wind down, then watch the next Downton Abbey episode on the telly as I eat from my family-sized Quality Street sweets box. Usually, within five minutes I am snoring like a freight train! It works splendidly, really.

A: To use a football analogy, in a game of climate change against humanity, I think the score would be 5-1!

Q: 5-1 for humanity or for climate change?

A: The importance is that both sides scored at least one point.

While the COP26 was underwhelming for many, with the Chinese and Russian leaders failing to attend the conference, and a failure to renew targets for 2030 that align with the goal of 1.5C, there were also some successes. Notably, a side deal was struck between 124 countries agreeing to end deforestation by 2030, developed countries agreed to increase funding for developing countries ($40mn annually) by 2025, and rules for carbon trading were finalised. However, it is true that the most represented entity was the oil and gas industry–more delegates than any other country–which sparked outrage as they helped to ‘moderate’ some of the agreements.

If you want to read more about the final outcomes, check out this “ Ultimate Guide” published by The Conversation.