Hit enter to search or ESC to close
Creative Writing

By Elektra Papathanasiou-GoldsteinDecember 6, 2021 No Comments 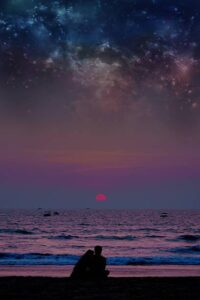 Life on the back of a motorcycle in August doesn’t get much better, doesn’t get easier, or freer, or more blissful than this. This blip in time is circled on an invisible calendar, reserved for simplicity and happy little adventures in the small village by the sea. It’s reserved for lying on your chest, releasing dancing smoke through parted lips, and watching it pirouette elegantly around the atoms in the air. Bonfires that make eyes glow, rays of sunlight that bounce off waves, and heat that blurs the air right above the burning sand. Reserved for nights where you hop through the fishermens’ boats anchored near the shore, screaming as one of your friends pushes you off the edge, or gliding in a dive so smooth that you barely disturb the peace of the sea. Maybe one night you’ll have the guts to climb on one of the yachts and jump from there, but you probably never will.

Although there’s no speaker, jazz rap floats out of a cracked silver Android phone, drifting into the silence of the beach and mixing with the soft sound of cicadas and calm waves. A clipper lighter flicks, you can see each others’ faces in the dark. The stars are so beautiful and infinite, only millimeters between them and sparkling so many light years away. He holds your hand and traces the Big Dipper with your finger, and the constellations seem to connect and fit together. You look at stars that may not even be alive anymore – shooting stars that leap in the black sky. Photons and supernovas and black holes and the lightyears between them remind you that nothing really matters. We’re just another one of those, made from stars and endlessly orbiting a star, stuck in a loop that lasts forever, trying to make sense of why the planets will perpetually spin around the sun, never letting her go and clinging on in an orbit that circles and circles. We gaze into night skies, into the past, into stars that are so far yet so close.

You stare at the sunset together sometimes, watching clouds turn pink, the ocean swallowing the sun, and then night falls, until the sun emerges from the waves and paints the sky blue again. Swimming at 5am, the water is still untouched by kids in floaties splashing around, volleyballs skidding off the surface, swimmers heading towards the horizon alone, or flat gray stones skipping one, two, three, more times, if you’re lucky. Ripples trailing behind them until the journey stops and they sink back to the bottom where another million similar stones sit in underwater peace. An early morning ocean so flat, so clear and almost motionless that you’re almost scared to ruin its perfection, but you’re not that scared so you just let the water hold you as you lie on your back with eyes closed, feeling like this is the one moment in the universe that is truly yours, the moment that everything is where, how, and when its supposed to be.

There’s a row of rocks that lead to a little abandoned lighthouse, just a bit shorter than a tree. Rusty, but you hold hands to balance and climb up the stairs to where the wind makes it impossible to light the Marlboro reds and could blow you away if it weren’t for the one thin rail on the circumference of this little deck. It’s nice to live nocturnally sometimes, wake up at 5pm and fall asleep at 5am on a sunbed, wake up burned some days, but the water is a cool remedy against it. It’s nice to see the lifecycle of the sun and the town that buzzes at night with bars and restaurants and arcades and teenagers using the steps of the dock like couches at a party. Watching people slowly drift off back home, shops being locked, and lights turning off, the last sounds of bike wheels and laughter fading in the direction of someone’s house or hotel — while you both stay on the beach and ‘kill time’ until the town wakes up again.

Of course, this isn’t labeled long term “love”- but it’s not one forgettable night either that doesn’t feel great in your chest the morning after with the hangover pounding in your head. It doesn’t have to be either one of those, it’s just what it wants to be – a few weeks, to lie on a mattress without a bed frame while the molten gold of the late afternoon light makes the room glow, illuminates flushed cheeks and smiles with half-closed eyes. Basking in golden hours, absorbing the light like a plant finally moved from the shade. No, this isn’t anything really, just a way to make sure we squeeze every last droplet of spontaneity and liberty from our youth, to exist in a dream-like state of sun, salt, each other, water, and sand — sit under contorted olive trees lined up in rows and eucalyptus trees that tower so far above, whose scented leaves brush the edge of the heavens. Again, just a blip in time of lives that happened to intersect in a little village town. Two threads of life that crossed, and tangled, and weaved together over the course of a few weeks. But threads of life keep unraveling, only sometimes does it feel like two of them knot together and cling to each other without letting go for a while, stuck in a fragile moment in time.

Two weeks out of who knows how many decades.

When the plane takes off the feeling might last a little longer, probably because your body is flying through the sky. Looking outside the window you see the details of every little light like fireflies on the surface of the city. You wonder who else sitting on the plane is holding on to the beautiful village you saw just minutes before arriving at the airport, trying to use their mind’s eye to picture it as vividly as possible and replaying the visions over and over again so they don’t slip through your fingers, soar away like the plane that is getting closer and closer to the runway of a different airport.

You’ll go back to a place without the olive leaves and turquoise sea and sun gleams – a city of skyscraper trees with concrete trunks and glass leaves. A sky gray like the stones that gleefully skipped on the water and left ripples that disappeared from one moment to the next.

And when the leaves back in the now-empty village fall off the olive trees, leaving skeletal curving trunks above them, the sun stops being able to burn skin, and the first snowflake lands gently on the sand – it’s just another August memory, tucked in between turquoise waves and resting in the spot where the ocean kisses the sand, over and over again. 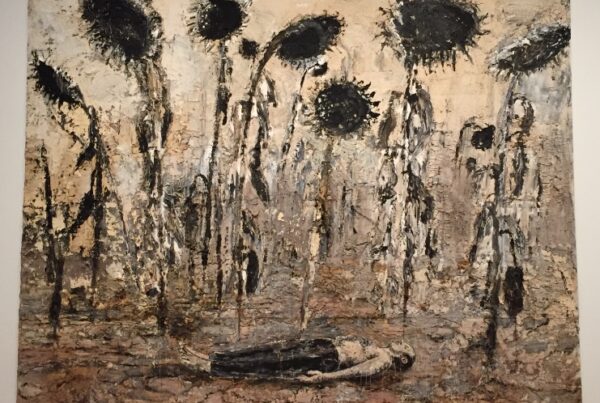