Hit enter to search or ESC to close
EuropeForeign AffairsHomepage

One Hundred Years of Nordic Democracy

By Oscar BrunzellDecember 26, 2021 No Comments 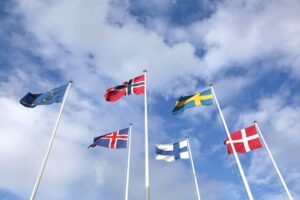 One hundred years ago, in 1921, Sweden followed its Nordic neighbors in holding its first national election based on “universal and equal suffrage”. This milestone completed a long transition toward democracy in the Nordic countries, now considered among the most democratic and equal in the world.

The place of the Nordic countries in setting an example for the modern democracy of today should come as no surprise, as what is presumably the world’s oldest parliament (Althing) was established in Iceland, 930 CE. More than one thousand years later, in 1980, Iceland became the first country in the world to elect a woman as President; Vigdís Finnbogadóttir.

This groundbreaking change toward universal and equal suffrage, with the Nordic countries in the lead, has become a cornerstone of modern democracy today. In fact, Bertrand Badie, emeritus professor at Sciences Po, defined it as one of the minimum conditions of electoral democracy, along with competitive elections and a responsible government. Later on, the rest of the world followed suit, as universal and equal suffrage was adopted in the majority of the world’s countries and territories pre-1960. In the hundred years of Nordic democracy, it represents an inclusive and welcoming system, with the will of every citizen at its heart, where progress cannot be measured in weeks, months, or years. Democracy is not static, but an ongoing evolution, where political leaders and/or the general public participate in debate, listen to dissent, refine views, explicate contrivance for change, explain the benefits of change, and then make changes in the best interest of society.

Democracy is the predominant form of government and way of organizing society. There are more democracies today than ever, contradictory to the development that political philosophers as Plato or Hobbes envisioned. Despite the failure of several attempts to fully democratize the world, democracy overall has prevailed; where it has come from the inside, by internal will, and not from the outside, by external pressure. Although inconsistencies remain regarding what exactly democracy entails, beyond those disagreements it is the largely unquestionable endeavor of the common man; at least in the West, despite democracy’s “short performance” on the world stage.

However, we may not rest on the laurels of our past. Even democracy today has its flaws. As said before, it is in democracy’s nature to be an ongoing process that needs to constantly be worked for and defended. There are countries labeling themselves as democracies in which “universal and equal suffrage”, among other democratic components, is heavily restricted and only an accessible reality on paper. The bare minimum requirement of a democracy is not even fulfilled. After all, democracy for the few is a contradiction and in opposition to a “government of the people, by the people, for the people.”

Democracy, as we know it today, faces many challenges. Notably the rise of illiberal democracies and the potential success of the “China model” (sustained growth under authoritarian forms). And in a difficult and uncertain time with restrictions, lockdowns, and emergency measures, the essential question is how democracy has been affected around the world. Michael J. Abramowitz, president of Freedom House, proclaimed that “What began as a worldwide health crisis has become part of the global crisis for democracy”. Indeed, democracy is neither invincible nor inevitable.

The Nordic countries, and yet other stable traditional democracies, must continue setting an example across the world. In this mission, the “Nordic Association of IEP Paris” stands strong and provides a Nordic perspective in an increasingly globalized world. In 2021, a hundred years after all the Nordic countries embraced “universal and equal suffrage”, the Nordic spirit has broadened to Sciences Po with the establishment of the “Nordic Association of IEP Paris”.

We acknowledge that exchange, transparency, and inclusivity are key for any prosperous society and true democracy. However, even democracy has its flaws. Indeed, “… democracy is the worst form of government, except all the others that have been tried…”. So it must continue to evolve. Now that we have reached the centennial, our work is not done…