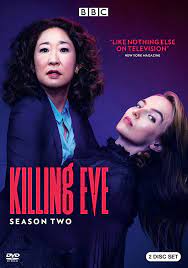 Killing Eve, or the underestimated genius of women

By Juliette PieraertsMarch 22, 2022 No Comments

“It’s not about who wields the knife but who has the power,” Lucy Hunter Johnson for the Evening Standard.

At the onset of the first episode, the screen fades from black to show the name Vienna in capital letters. A public square appears, and the camera rolls towards a cafe.

Inside, a dark, long-haired woman is pensively eating ice cream. A little girl is sitting across the room, facing her, unsure of how to feel about the way the woman is looking at her. Her face is emotionless. She realizes the little girl is now looking at the waiter behind the counter and smiling back at him. She sees how his eyes translate something genuine. Looking back at the little girl, the woman now tilts her head and smiles too, with her teeth. She then brings her arm up to check the time and wipes a single drop of blood from her watch. She stands, grabs her things, and walks to the door. Walking past the little girl, she surprisingly pushes her ice cream bowl onto her shirt and walks out, a thin smile on her lips. The title, “Killing Eve,” appears, a drop of blood running from the letter N.

This first scene was enough for me to feel hooked. But let me tell you this: it gets so much better. I fell in love with Villanelle, the woman in the café, and all of the other characters. This series is something different; it feels new, refreshing, genuine, and well crafted. It is now on my god-tier list of series, and rewatching my favorite scenes for this article was a sweet break from studying. I could witness again how well the characters grow together and how the story develops to give us heartbreaking and equally bloody interactions.

Now, before diving into any details, let me introduce to you the hugely talented woman who brought this to life: English actress, writer, comedian, and television producer Phoebe Waller-Bridge. You may know her for her critically acclaimed work on Fleabag, an original play turned into a two-season TV series, with which she truly charmed audiences and built her reputation. Lately, she was also on the crew of the latest James Bond movie, No Time to Die, as a writer. But what I am writing about today is her lesser-known but definitely not less exceptional work: Killing Eve.

It is a TV series developed for the BBC. It is loosely adapted from a series of novellas, Codename Villanelle, written between 2014 and 2016 by Luke Jennings from The Observer. The rights to adapt them were optioned in 2014 and four years later, the first season premiered. The writing process was unique as Phoebe Waller-Bridge passed the hand to several other writers, and it was directed by ten people among which six were women.

Let us circle back to the series, its plot, and its implications. Killing Eve follows two main protagonists: a sociopathic Russian assassin and a modest MI5 agent as they embark on a cat-and-mouse chase around the globe and develop an obsessive relationship around the thrill of it all. Villanelle, played by Jodie Foster (The Last Duel), is leaving a trailof unconnected murders and Eve Polastri, played by Sandra Oh (Grey’s Anatomy), seems to be the only one who understands how to track her down as the body count brutally accumulates. The side characters are as captivating as the leading duo, with Fiona Shaw as Carolyn Martens (Harry Potter), Eve’s superior, or even Kim Bodnia as Konstantin, Villanelle’s coordinator. Later in the show, Camille Cottin (Dix pour cent) even makes an appearance as a higher ranking official in the mysterious organization Villanelle seems to be operating for.

This spy thriller is built around Eve’s character, who tries to track down Villanelle, but as they become fascinated with each other, their relationship as hunter and prey blurs as the episodes go by. In this sense, the tension between them, the genuine fear Eve has for Villanelle, and the anger and curiosity are all developed perfectly.

The script is very well written, with truly authentic dialogues and a story that unfolds without giving us all of the answers too fast. We can see the characters work for the truth they seek. We also see them go through heartbreaking events and change in devastating ways. Their chase around the world also makes it a very entertaining series with great action scenes and suspense. It does follow a certain procedural etiquette, it is a spy thriller after all, but it does not always go where we expect. The characters’ personal agendas and Villanelle’s eccentricity make it hard to actually predict anything. The mystery of who actually employs her and the other Russian assassins is very well kept throughout the three seasons, for example.

Love, hate, grief, trauma are all intertwined in this tale of flashy murders and elaborate crime-solving theories.

We continuously root and hurt for the characters, even for an actual killer, because both Villanelle and Eve are so intelligent and strategic, but also very seducing, and they end up winning our approval. Their own relationship grows into something very organic and obsessive. They complete each other in the sense, as Eve finally makes Villanelle feel things, and on the other hand Eve feels more alive and can embrace a darker side of her personality with her.

The characters are written in a way that makes us hurt and feel for them. The psychology of both Villanelle and Eve is crafted and developed in a way that makes us root for an actual killer and a woman on the brink of madness. Both characters are highly intelligent, strategically and emotionally. They get themselves into unnerving situations but fight (or kill) their way out of them. And most of the time, they end up winning our approval. They are very seducing and fascinating, and we get to witness how their relationship grows into something very organic and obsessive. It is as if Eve finally makes Villanelle feel things, like excitement, yearning, passion, and Villanelle makes Eve feel alive and more in control of her life than ever.

The authenticity of the way the characters are written, with genuine flaws and impressive skills, and the way they relate to each other and their world, comes from the crafting process of the series itself. As I said earlier, many women worked on this project, it was brought to the screen by a woman, and it was written by several women. The creators of the show actually decided to let a different showrunner film each season to transmit the very specific female perspective the story is all about. 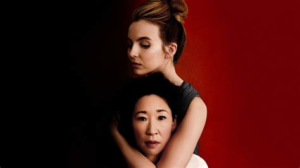 Another element that adds genius to this series is the cast that brings us such a perspective with so much complexity. Jodie Comer and Sandra Oh are both outstanding in the roles of Villanelle and Eve as they offer a wide range of emotions. Sandra Oh was actually the first Asian actress to ever receive an Emmy Award for Best Lead Actress in a drama. And Jodie Comer is particularly impressive as a stone-cold assassin that is not supposed to feel anything but slowly falls for the intelligence agent that desperately tracks her down. She also masters quite a range of accents. The costume crew deserves some spotlight too, as the wardrobe imagined for her character and the many covers she pulls out are impressive.

Killing Eve is truly a groundbreaking series. It actually was praised for the way it deconstructed and reinvented the crime genre. In a genre where the bad guys and the highly clever detectives are usually men, and women only sidekicks or washed-off romantic interests, it is genuinely refreshing to see two women as the main focus. It is highly empowering, because for once it is not violence solely on women but violence by women.

Women are constantly violated in the media, they are verbally abused, assaulted, raped, tortured, killed… In this show, there is a real cultural shift. Women no longer exist only to be brutalized; they are a driving force. As journalist Lucy Hunter Johnston puts it, “writers and directors such as Waller-Bridge are showing a fresh alternative: women can be as dark and twisted as men, and it makes for compelling viewing. Far from being helpless, faceless victims, we girls can be the psychos too. How’s that for a twist?”.

Killing Eve offers us a true female gaze. It suggests horror rather than showing it flatly; it is funny, full of dark humor, and it is brilliant.

“Waller-Bridge has said it’s the intersection of comedy and horror that fascinates her — turns out that we viewers agree,” Lucy Hunter Johnson for the Evening Standard.