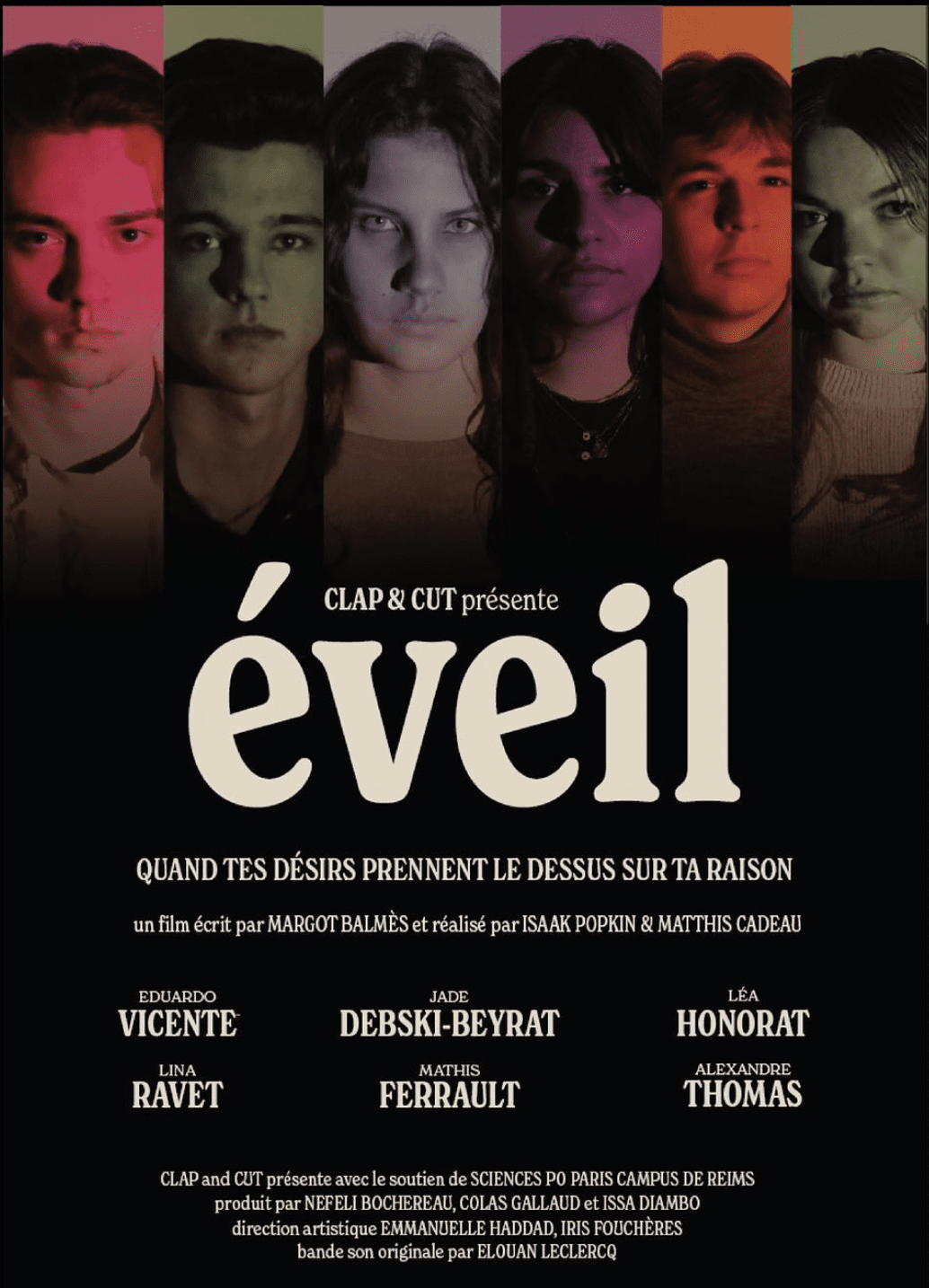 ‘Éveil’ Review: When our past is brought to life

In Clap & Cut’s original and first-ever feature film, a hesitant young woman is dragged into a haunting past.

An enthusiastic and youthful scene and a dazzling exploration of one’s own demons, Isaak Popkin and Mathis Cadeau’s “Éveil” follows Alice (Jade Debski-Beyrat), a sensible young woman who joins her boyfriend Lucas (Eduardo Vicente) on a seemingly benign weekend in the all-too-typical French countryside. As charming and removed as Alice herself, the film’s location pulls the audience from their seats and encloses it into a world of its own. Thrilling from the moment the curtain opens, the plot stirs the viewer from the onset before settling down and stirring up once more.

Clap & Cut’s touch is familiar; with card games, young couples, and dimly lit wooden cabins, the young audience resonates with the film’s energy. The cast comprises the always-invited shy friend, Sacha (Alexandre Thomas), with the witty and elegant copine, Noa (Lina Ravet). More captivating still is the influential, wise yet imprudent Ezra (Lea Honorat), who directs the séjour like an orchestra conductor, captivating Alice’s attention through her enigmatic attitude and provocative inquiries. Daring as she may be, her protagonism in Alice’s attention brings jealousy and resentment into the picture, equally all-too-familiar motives in our young lives.

The story takes place in an atemporal context. Be it last weekend or a year ago, “Éveil’s” themes and ambitions are ever-present, just as its mise-en-scene. The film brings back iconic elements of a thriller in the middle of the woods, like the record player, and mixes them with colorful elements like the foosball table which everyone seems to dominate

Doing their style justice, Clap & Cut’s varied use of aerial shots, close-ups, and continuous takes is impressive. The film’s photography might not be remarkable for its originality, but its dynamism and innovation are worth a round of applause. Even if the cinematography falters in captivating the influence of the physical context on the characters’ psyche, it is fluent in capturing the emotions of the characters and the impulsive and complex interactions between and with themselves. In the end, the gamble pays off as the script’s narrative is well complemented by the risky but captivating camera work.

Touching upon narrative, Margot Balès’ script’s juvenile touch blooms and matches the young characters. With no further remarks, it is well-written, presenting an occasionally predictable but quickly developing story. While it sometimes rushes through moments that leave the viewer with little time to digest, the velocity of the movie does not leave room for redundancy. Right when the plot hints at repetition, the story swiftly swings up and leaves the wide-eyed viewer intrigued to understand what Alice will do next. Something about the film’s velocity is thrilling… is time running out?

The constant day-night shifts are fast-paced, unexpected, and oftentimes abrupt. However, as any reasonable member of the audience should concede, an eventful week was condensed by the team in a couple of short winter days, an extraordinary effort.

Elouan Leclercq’s professionalism and severe musical touch are ubiquitous. The soundtrack fits not only the character’s steps but the profoundness of their gaze and the severity of the dilemmas they encounter. The original soundtrack accompanies the fracas of the plot; although turbulent, Leclercq steps in and rides the roller coaster to its end, keeping the momentum up until the climax and its final unfolding. Bravo for the soundstripe.

For the cherry on top, the acting performance never falls short of delightful. The actors’ effort is an ode to the commitment of an actor to their role and their responsibility in channeling emotions into an engaging act. The cast managed to delve into their characters and, despite an occasional rush through the depths of their particular personalities, the progressive construction of their roles is suave, yet never effortless. An unpolished, unapologetic acting whose amateur charm vastly contributes to the overall youthfulness of the performance.

Overall, Éveil is proof of artistic freedom and boldness, from the scenery to the music, from the cinematography to the acting. Personally, I enjoyed the film just as much as I thought I would, and I am nothing but proud of my friends and colleagues. Éveil is a remarkable collective effort that resulted in a piece which, I believe, everyone should be proud of, including the viewer. Sincere congratulations to Clap & Cut.