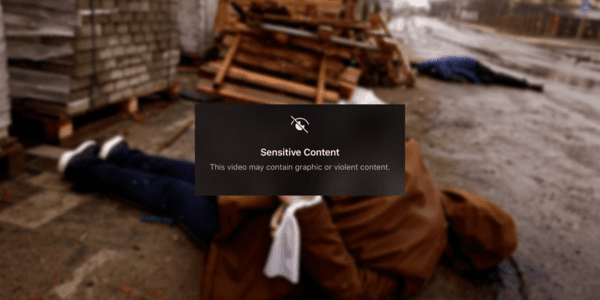 Bucha and 44 days of “Sensitive Content”: Do I Matter In This?

Home » Bucha and 44 days of “Sensitive Content”: Do I Matter In This?

TW: this article contains content about violence and sexual assault

When I woke up on the morning of February 24th, my Instagram feed had already been flooded with reposts of excerpts from Putin’s speech announcing a military invasion of Ukraine, reports of explosions heard near major Ukrainian cities, and alarms going off in Kyiv urging residents to seek shelter in metro stations, infographics on military movement from the BBC, and the images of the first civilian victims of the war. This served as proof that the balance of power in Europe, as we knew it, was over.

I have always had a complicated relationship with armchair activism. I would label myself a fraud when posting about issues I do not know enough about or am not sufficiently invested in to call myself an activist – so I would let the infographics pass through and opt for an additional Women’s Rights March or local protest to compensate.

I knew the harms of armchair activism, the black squares on #blackouttuesday drowning out crucial information on logistics of BLM protests in June 2020, which caused massive issues for mobilization. I had heard about @feminist being owned by two white businessmen, famously known for using the catchy usernames of their multiple activist accounts to discreetly promote their clothing brand.

But Ukraine felt different. There has not been much conversation on Russian imperialism on social media, and as an Eastern European who relates to the generational trauma caused by the atrocities my country has suffered during the Soviet occupation, I felt obligated to do something. As did many of us.

This is not a conversation about donating, showing up to protests, or volunteering. There is no question about it given the urgent need for rallying aid, and every day of noninvolvement failing to prevent another hospital bombing, sexual assault, and innocent civilian deaths. Rather, this is an inquiry into if there is a place for armchair activism in this war, and if motivations for it matter.

Many are quick to critique the ingenuity of those posting a story urging donations to the Red Cross or contraception pills to send for Ukrainian women who have been assaulted by Russian soldiers, followed by snippets of a night out at a restaurant. It feels out of touch with the brutal reality Ukrainians face, even if it is aimed at helping them.

Trend or not, sharing stories about raped and murdered women stripped naked on the street, Russian soldiers ransacking apartments of families they had just executed, and playing hunting safari with Ukrainian kids is not easy. Reposting pictures of massacred Bucha residents laying on the roads and their mass graves is something easier to avoid for the sake of one’s mental health.

Nonetheless, people do. They use their platform, notwithstanding their number of followers. Whether it is to question the indifference of their leaders, the unconcern of their workmates, or acquaintances from university, they do so to state, for the hundredth time, that war is personal. This is not about statistics of civilian deaths or another rollout of sanctions, this is about fighting to not be desensitized to the absurdity, inhumanity, and brutality of modern war. Especially at Sciences Po, an international environment where we tend to be out of touch with the sufferings of regions other than those close to ours, each nationality becomes the flagbearer of bringing awareness on what is happening to their own circle.

Western society has changed the way it approaches war, particularly because of the steep rise of armchair activism. What some now refer to as “the box of pain,” the passage from one story to another with hidden pictures alerting of “sensitive content” to shield people from images of extreme violence, just goes to prove how widespread it has become. This is one of the most actively recorded wars in history, the coverage of which every armchair activist partakes in, no matter if they go the extra mile of donating, volunteering, protesting, or not.

Is it superficial, the pictures popping up on your Instagram story, that one feels as though the whole world has already seen? Yes, probably. It is not as though the algorithm favors distressing content, but one thing it detests even more is detailed infographics and statistics, which are assumed to be just as difficult to consume. Armchair activism is not here to teach history, it is here to push the imperative to feel. This is not war in a candy wrapper.

The more physically nauseating and angering and overwhelming your feed is, the greater the political capital to pressure Germany to stop trading with Russia, Lenovo or Turkish Airlines to pull out, and finally, to get Russians to protest against Putin’s regime and out of the apparatus of state propaganda. An emotional appeal goes hand-in-hand with a call for action. It is thanks to armchair activism that thousands have sent in reviews on Google Maps to Russian restaurants with distressing images and a demand to take to the streets. It is exactly through Instagram that Netflix was bombarded and forced to withdraw from Russia following their “nonpartisan” stance.

One can say it is not enough. While no one wins wars on social media, it is means to keep the broader society informed, moved, and irritated, pressuring news media, politicians’ rhetoric, and donation trends to follow. This is an amazing precedent that will hopefully politically engage civil society with issues chronically covered up and underreported in Western news cycles. We need to be careful not to fall into the trap of “murder porn” and not to victimize those suffering from war to the extent to which they lose agency over controlling the very narrative that covers their fate. But there is no way to have this conversation if no one knows what is going on in the first place.

The only conclusion that could be confidently drawn, then, is that armchair activism is a starting point, but not the end goal of political engagement in the public discourse. I would rather not have Bucha live in my head for the weeks to come, but it will, and only because of those who take the fifteen seconds to repost. I am always there, and I will continue to be. And if this is the minimal price I have to pay, curled up in Western Europe and shielded from the ambiance of grief and fear in the East, I am glad to be disgusted in peace just so long as it keeps me involved and prompts others to follow suit.