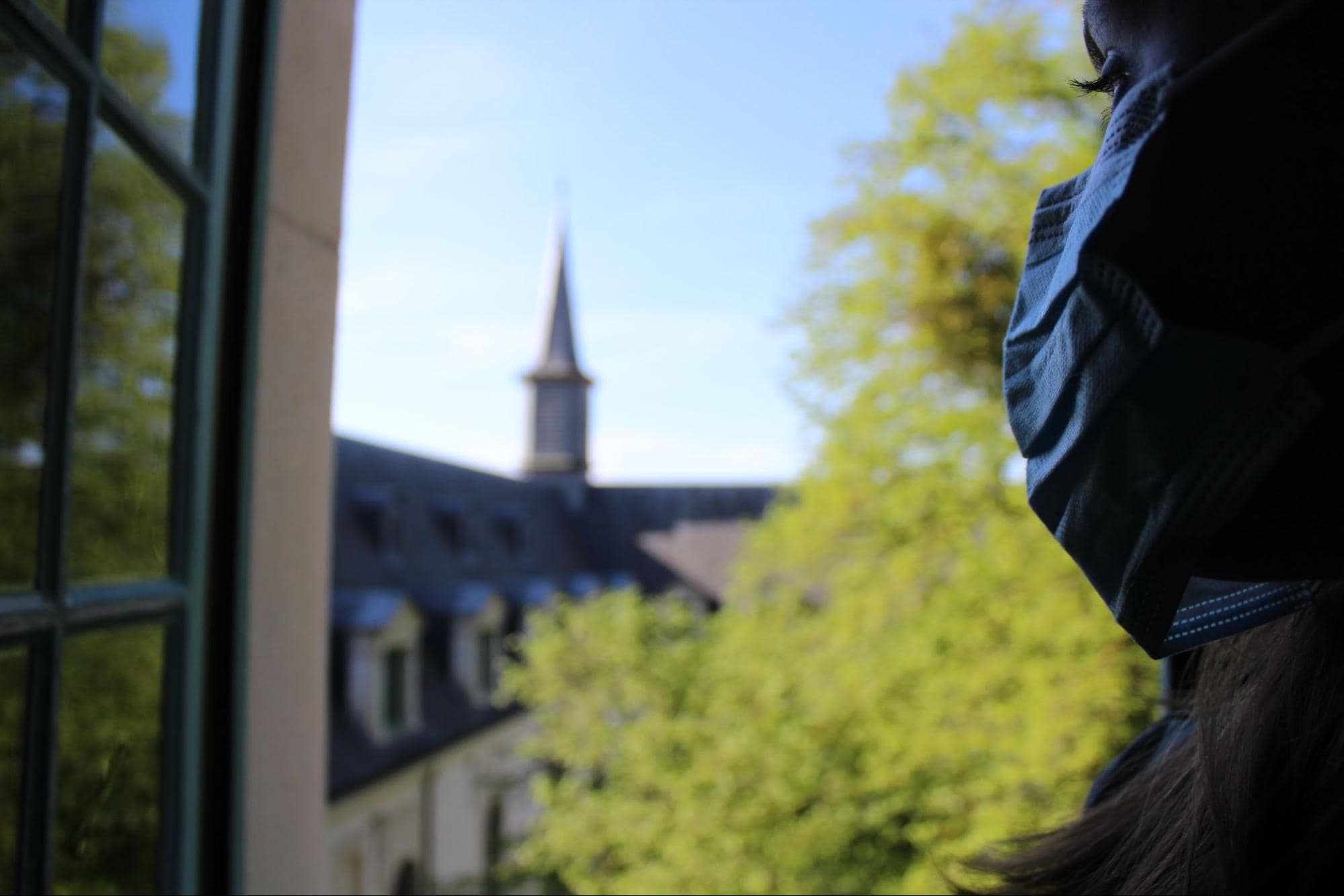 By Monica SchneckMay 8, 2022 No Comments

Home » Sciences Po Without Masks: the Good, the Bad, and the Numbers

When looking into writing this article, I was in a haze of happiness, being able to take my mask off. During one elusive week of spring, the sun was out, masks were off, and things were looking up. However, writing now from my 6th day in quarantine from a Covid-19 infection, it is clear that there are negatives and positives to lifting the mask mandate. This article will explore both sides with a close investigation of student opinion regarding the withdrawal of the mask mandate.

First, let us revisit the moment when the new policy was first conveyed to the students. The administration sent an email to all Sciences Po students on March 11th, 2022 notifying them that masks would no longer be required in most indoor settings, such as classrooms and lecture halls, as of March 14th. This email detailed that the right remains to wear a mask whenever desired and that other hygiene practices were still in place, but the official mask mandate had been lifted. This decision was in accordance with the governmental regulations at the time, so it did not come as a surprise that Sciences Po followed suit.

In reaction to this, a poll was sent via the Facebook group Sharing is Caring to collect data on the general student opinion. The survey was sent out on the 14th, the first day of the mask mandate being lifted, and collected responses until the 19th at the end of that week. The survey received 69 responses total, approximately 4% of the student population on the Reims campus. The survey was comprised of a series of four questions: whether or not the respondent was happy with no longer being required to wear masks on campus, whether or not they will stop wearing a mask on campus, whether they will continue to wear a mask in certain scenarios, and whether or not they feel safe wearing a mask on campus.

The initial findings of the poll and the interviews conducted early in the mask removal process found that people were very happy to be no longer required to wear masks. To the statement, “I am happy with no longer being required to wear a mask in classrooms,” 47.8% of respondents strongly agreed, 26.1% agreed, 14.5% were neutral, 8.7% disagreed, and 2.9% strongly disagreed. This sentiment was shared by Anna Schneiders, who said in an interview, “I’m really really happy about it. Honestly, I feel like it’s really liberating to be able to see everyone and talk to everyone without having something covering half of their face.” Anna and other interviewees also expressed that removing masks removed what felt like a barrier to communication, which can sometimes already be difficult on a multilingual campus such as Sciences Po.

Following general happiness about taking off masks, most respondents expressed that they planned on taking masks when allowed to. To the statement “I will stop wearing a mask on campus,” 47.8% strongly agreed, 33.3% agreed, 11.6% were neutral, 2.9% disagreed, and 4.3% strongly disagreed. These numbers indicate that the vast majority of people will not be wearing masks, which raises the question of who will continue to wear masks and when. Alexander Németh expressed that “If I’m sitting next to someone wearing a mask, I ask if they are comfortable with me not wearing it. I don’t really mind if I have to wear it, but it might make a difference”.

In addition to being willing to wear a mask when requested by others, being sick seems to be a reason why people would put the mask back on. This was expressed by Anna Schnieders, saying, “in the past, when I’m sick I would never think to wear a mask, but I feel like now if I had a bad cold, or something that I thought would be contagious, I would definitely keep my mask on in the hallways and the classrooms to avoid getting other people sick.” However, this does not seem to be a universally shared sentiment. To the statement “I will continue to wear a mask in some situations on campus but not others, 5.8% strongly agreed, 24.6% agreed, 8.7% were neutral, 26.1% disagreed, and 34.8% strongly disagreed. Alizé Jean offers a possible explanation for this, pointing to a stigma around wearing masks while no longer being required to. She said, “I think the stigma will prevent people from wearing a mask when sick with just a cold or a flu; they don’t want to be labeled or ostracized.” She continues, “In lecture halls, I’ve heard people coughing and people sneezing, and I don’t think those people are wearing masks. And so I think that there’s already this trend of people who don’t want to be seen as this separate entity when they’re wearing their masks”.

Despite this, there seems to be a general air of increasing comfortability around not wearing masks. To the statement “I feel safe with myself and others not wearing masks on campus,” 24.6% strongly agreed, 40.6% agreed, 15.9% were neutral, 13% disagreed, and 5.8% strongly disagreed. Additionally, in the interviews conducted longer after the mask mandate was lifted, there was already increased comfortability with not wearing masks. Respondents no longer felt strange not wearing a mask in the hallways and having quickly broken habits such as looking for one while walking into the school.

As more time has passed since the mask mandate was lifted, there have only been fewer masks worn on campus and increased comfortability with the situation. However, there has been a spike in Covid-19 infections on campus, following a nationwide spike in mid to late March. While it is difficult to establish this as a direct causal, the timing makes it difficult to assume it as coincidental. This reflects a concern expressed by Alizé: “I actually thought it was a little bit too early given all the cases and kind of what’s going on in the world right now. I kind of felt like we didn’t need another problem”. She later predicted why this policy was prematurely implemented: “ I definitely do think there was a political purpose for this. Like with Macron, like, wanting to be reelected. He definitely wants to appeal to a wide range of voters.” And while there is no way to say for sure, the timing does add up.

In a most recent update, the late-March spike is well in the rear view mirror, with masks still virtually disappearing on campus and little dissatisfaction expressed from the student body. Looking into the future, it looks like a campus without masks is here to stay, for better or for worse.