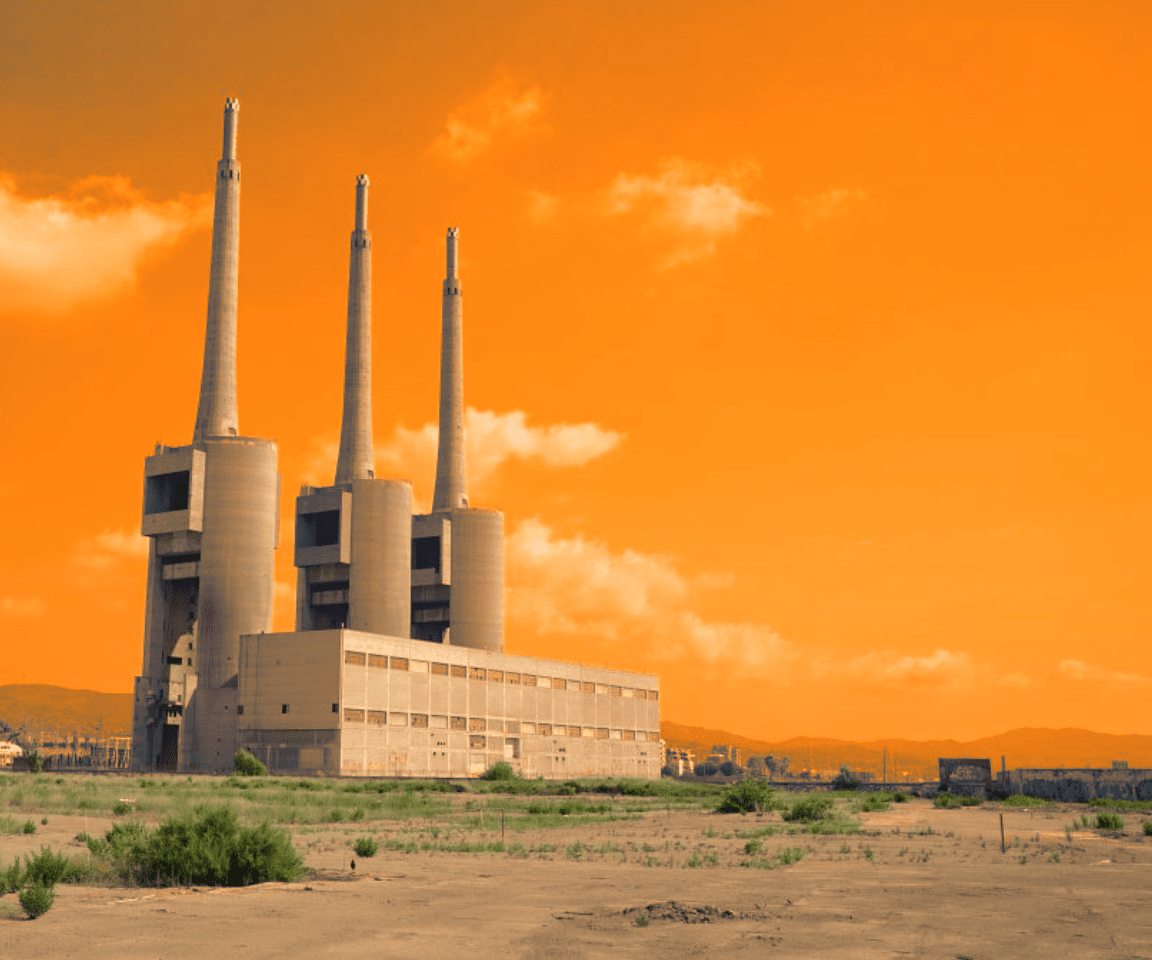 By Francesca PiliaDecember 2, 2022 No Comments

Never had the sun looked so malicious.

You raise your eyes to the horizon, hidden by a cloud of dust and smoke. As twilight draws near, the sun paints the sky with blood-like colours. You frown and turn around, trying to shake the uncomfortable feeling that has been following you since sunrise, along with the scarlet star.

In front of you lay the ruins of what might have once been a magnificent industrial complex, typical of a time when coal was humanity’s main source of energy. Three chimneys cut an impressive silhouette in the yellow sky, supported by a building like a box of cement in the middle of the flat desert. Hundreds of years ago, these sights might have inspired a sense of wonder. Now, the structure is crumbling: dry vines strangle the man-made stone, burnt by years of acid rain and scorching temperatures.

The earth on the side of the hill trembles when you step on it, like shards of bones crunching beneath your boots. You keep walking towards the ruins, which loom before you like the shadows of ancient gods.

Not many are aware of what hides in those ruins. You’re among the few that know about it. You know the route to avoid the snakes buried in the sand. You know what to wear to avoid undesired attention. You know that, right next to your heart, you carry a knife that’s felt one too many malevolent pulses.

In five minutes, you’ll be able to escape the eye of the sun. You’ll do so through an underground tunnel that you know is situated five meters on the right of an apparently locked door. The thought pushes you forward, and as soon as you open the secret entrance, a whiff of cold but stale air fills your lungs. You jump inside, and a rivulet of what you hope is water splashes under your feet. You proceed, retracing the steps you have been taking every week since you were five years old.

After walking for what always feels like an eternity, you get out of the tunnel, revealing a lively market perched on the floor of the ruins. The whole building, thought to be hollow by outside observers, actually contains hundreds of carts, shops and vendors. The first to arrive has the privilege of finding a place under the asbestos roof, earning some soothing shade; the last ones have to set tent in the west corner, where the roof and a part of the wall have collapsed, forming an unstable pile of debris that nobody dares to step on.

It is probably 30 minutes until sundown, and you see that many vendors have started to close up shop and look for a place to spend the night. You’ll be safe, you think. The scarlet sun can’t reach you here. You wander around, looking for food and supplies. You exchange a couple of words with one of the vendors, a big, muscular man with missing teeth and a silver tongue: nothing new from the city. You thank him and, while you’re patting your pockets in search of coins, you notice a crowd forming at the foot of the debris pile. You ask the vendor what it’s about, and he shrugs.

You keep doing your round of the market. Each time your gaze falls on the debris pile, you see the crowd growing bigger and bigger. Your curiosity finally gains the upper hand, and you decide to check it out. The closer you get, the more you notice the rapt facial expressions of the crowd. Frowning old men, wide-eyed teenage girls, middle-aged women nervously glancing at each other, and yet listening intently to the person on top of the pile.

You raise your eyes only to see a shadow against the open sky. You can’t distinguish any facial features, but judging from the upright posture and the height, the person can’t be less than 20 and no more than 40 years old. You start hearing their voice, loud and clear, warm and yet sharp, almost as if they had harp strings in their throat. You hear them speak,

“… their rules? We are no more welcome in the Steel City than a rat is in our kitchens. Why should we align our principles to those of a ruling class that has not only forgotten, but also condemned us to a life of danger and oppression?”, the speaker’s tone shoots up, daring anybody to contradict them, “why have principles at all? Ask yourselves this, my brothers and sisters: where do your values come from?” As whispers rise from the crowd, you jostle your way to the very foot of the pile, and you finally see that the person right above you is bald, their prominent cheekbones casting unusual and yet intriguing shadows on their face. A sarcastic smile is painted on their lips, and their hands, fluttering in the air, are slender and golden in the light of the setting sun.

“From religion?” they wonder aloud, their eyes scanning through the crowd, and they let out a bitter laugh, “my friends, God died five years ago, when all the wombs on this Earth started bearing nothing but dead children.” People around you gasp, but even you know what they’re talking about. Permanent exposure to limited quantities of oxygen and high amounts of pollutants in the air and microplastics in the water for the past 500 years has resulted in the absolute infertility of every mammal on the planet. You take a look at the can in your hand: fake meat produced in the labs. You know that right now, in the Steel City, babies are born in vitro, using cells cultivated from samples taken more than five years ago and then genetically modified to ensure a minimum of variety in the human race. The hope is that in the future a female will be born with a healthy womb. To enhance the chances, the Steel City has been turned into a new Garden of Eden: water is filtered, an artificial layer of ozone makes sure that UV rays are filtered, plants are grown without any toxins in the soil. A 50 meter tall steel wall is built all around it, to prevent access to anybody from the outside. Life inside is controlled by the ruling class of scientists that built the city. Their rules include the prohibition of alcohol and tobacco, at least two hours of exercise a day, and marriage by 16 years of age. No deviations from these rules are tolerated.

Your gaze darkens. You know that the only reason why the city functions is the exploitation of your peers, who toil in the extraction of raw resources from the earth, who are forced to live amongst toxins in the name of the ‘greater good’ of humanity.

“After everything that has happened in the last years, do you still believe that taking a life is inherently wrong? Do you actually think that, just by virtue of being alive, everybody has a right not to be inflicted pain upon? Look at all our values about selfishness, theft, betrayal. They are considered to be terrible things because they hurt others, but is putting yourself first morally wrong?” The whispers in the crowd grow louder, and you feel something burn in your chest.

The sky has now become bright orange, and as the last ray of the sun lands on the preacher. When they speak, they seem to be  engulfed in flames.

“Or do your values just stem from a fear of punishment? If that is the case, my fellow citizens, I offer you an alternative to the oppressive regime we have brought upon ourselves!”

They take off the cape that has adorned their shoulders this whole time, revealing their naked body underneath, indistinguishable in the twilight’s game of shadows.

“Follow beauty! Follow desire! Follow your most basic instinct as a human being and escape this suffocating life! You don’t owe shit to anybody else but yourself! Look for that fluttering in your heart and nurture it back to life!” Exactly as they open up their arms in a final gesture, as if they are about to take flight in the darkening sky, the sound of an acute siren starts reverberating in the air. The crowd starts screaming, a helicopter descends upon the preacher, a bunch of men in military uniform jumping from it. Deafened and blinded, you get pushed on the ground by the panicked crowd around you, and the only thing you can do is hold your head in  your arms and silently pray that you don’t die.

As you regain your sight, you see the preacher  struggling with the soldiers, writhing when they violently grab them. Then a scream adds to the cacophony, but is then silenced by multiple gunshots. You see the preacher’s skin stained in maroon, and you see their body being put in a plastic bag and thrown on the helicopter. Nausea gripping your stomach, you manage to get up and run. The symbol on the side of the helicopter taunts you: a huge, scarlet sun above a city skyline.

You run outside the market, and once the adrenaline wears off, you collapse on the sand, the pain from your wounds pulsing against your skin at the rhythm of your heartbeat. You lay there for what feels like hours, the stars above you the only witnesses to your thoughts and your crying. When a tenuous light starts appearing to the East, you stand up and start walking towards it. The first ray of sun illuminates the only plant in sight. You get closer. It’s a cactus flower. It’s a bright shade of pink, or maybe fuchsia? The only thing you know is that, to you, it’s the most beautiful thing you’ve seen in years. You drop on your knees, and, as tears start streaming down your face, you stare at the two lines you have tattooed on your wrist: