By Natalia Roca LoperenaJanuary 24, 2023 No Comments

This article was inspired by a conversation with a Moroccan nomad from Western Sahara who described how the disputes over the territory he lived in changed his and his family’s life. This is predominantly because their main economic income was based on the buying and selling of dromedaries in different areas of the Sahara Desert. The ongoing conflict between Algeria and Morocco in the Sahara Desert has led to the closure of the border between the two countries, and impelled many families like his, to have to move to Marrakech and start a new way of life. In his case, one based on tourism to replace what was his father’s occupation in the desert.

In a hyper-globalised world surrounded by dissension, the modern-day conflict between Algeria and Morocco—which originated from the Sand War of 1963—is an important one to become acquainted with, as it remains highly underreported even though it has broken down political relationships, destabilised and also heightened tensions in the Middle East and North Africa region.

After Algeria’s and Morocco’s colonialism era in the early 19th century under French occupation and Spanish influence, the destabilisation of diplomatic ties between both countries and the redrawing of national borders inevitably led to regional tensions and conflict. This hostility and the long-time territorial rivalry between Morocco and Algeria has long been running and has been steadily increasing since the Sand War of 1963. Currently, the conflict has become more complex with the emergence of the Polisario Front (the Sahrawi independence movement supported by Algeria), and its call for self-determination. While Algeria backs this Front, Morocco opposes it, as it sees the former Spanish colony of Western Sahara as an essential component of its national territory and regional sphere of influence. 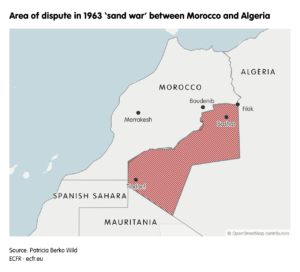 Tensions between the two nation-states today are a result of a number of factors, including the lack of a clearly defined border between the two nations, the discovery of valuable resources in areas that are under dispute, and Moroccan irredentism, which describes the attempt by a nation to annex territory that it believes to be lost or based on historical precedent. In the 90s, a cease-fire between Morocco and the Polisario Front was announced, and it lasted nearly three decades, but hostilities resumed in 2020 when President Donald Trump decided to recognize Moroccan sovereignty over Western Sahara in December of said year. Although the hostilities are not as violent as in the year 1963, they seem to show a continuous and dramatic increase.

Officially, Western Sahara is classified as a “Non-Self-Governing Territory” by the United Nations. Nevertheless, Morocco considers Western Sahara an integral part of its territory and sovereignty due to historical ties and the Greater Morocco ideology (a broad view and ideology of the great Shereef Dynasties where they demanded and referred to the return of wider territories of Mauritania and Southwest Algeria historically associated with the Moroccan sultan). The International Court of Justice recognized those ties but adjudicated that this does not amount to ownership over the territory. On the other hand, Algeria has supported the independence of the whole of Western Sahara since 1975, when Spanish forces and settlers withdrew from the area.

Recently, the conflict has brought up the rupture of diplomatic and international relations between more countries, not only Morocco and Algeria. After Prime Minister Pedro Sanchez’ Spanish government abruptly announced its support for Morocco’s autonomy plan for Western Sahara, Algeria introduced in June 2022 a series of measures that would block the exchange of non-energy-related goods and services to Spain.

The question that arises now is whether war or violent conflict will emerge between Algeria and Morocco in the short or long term, and what measures are being implemented by the international community to avoid it from escalating further.

One of the latest developments was on 27 October 2022, when The Security Council voted to extend the mandate of the United Nations Mission for the Referendum in Western Sahara (MINURSO) until October 31, 2023, adopting Resolution 2654. The UN organ called the parties to resume negotiations in good faith in search of a political settlement for the region that would be acceptable to both sides. The 15-member organ reaffirmed its full support for the Secretary-General and Staffan de Mistura (Personal Envoy for Western Sahara) to facilitate talks to find a resolution to the Western Sahara issue. In addition, the 15 members urged Morocco, Polisario Front, Algeria, and Mauritania to cooperate with de Mistura throughout the process to be able to assure a successful outcome.

The Kingdom of Morocco welcomed the adoption of the Resolution by the UN Security Council, and Morocco’s King Mohammed VI has called for a restoration of diplomatic ties with neighbouring Algeria, which broke off diplomatic relations with Rabat last year. Algeria, however, rejected the Resolution, and the Polisario Front is insistent on acquiring a UN-sponsored referendum on self-determination.

The latest UN Security Council Resolution can be seen as an effort to attenuate the tensions between both countries. Nevertheless, it is not certain what will happen when the referendum ends next year. Federica Saini Fasanotti, who specialises in military history, poses three possible scenarios for this conflict that are relevant to discuss and keep in mind in the upcoming years.

The first one is that tensions between Morocco and Algeria may rise, which constitutes the most likely scenario in the short term. Algeria has other priorities on its agenda, nevertheless, such as repositioning itself on the global stage as a major energy exporter; which might make this country less interested in waging war with Morocco. The second scenario, whilst improbable, is that due to the energy crisis caused by the Russian war, Algeria is focused more on its foreign relations with other countries, especially European countries. This might make Algeria consider its rivalry with Morocco as unnecessary and ultimately counterproductive, and accept once and for all Morocco’s stance on the dispute. Although highly unlikely in the immediate term due to Europe’s interest in maintaining peace in the region for any potential energy agreements, the third possibility the author poses would be that the crisis turns violent.

Nomads in the Northern Africa region are one of the many groups of people that have been affected and continue to be affected by the Morocco-Algeria conflict that derived from the post-colonial tracing of borders. Testimonials from Moroccan nomads help prove that postcolonial consequences and their legacy still affect the inner dynamics of societies of the Global South.

It is imperative to raise awareness of all of the present-day conflicts that are occurring in post-colonial states not only because they highlight colonialism’s long-term ramifications, but also because these issues are highly underreported by the mass media.