By The Sundial PressDecember 3, 2017 No Comments

Eloquence is a time honored tradition at Sciences Po, finding its source in the history of Oral Presentations. On November 23, that tradition continued with the Anglophone Eloquence Contest held by Sciences Polémiques Reims. Six finalists performed five minute speeches, written based on a prompt from an 80s or 90s classic film. Following each speech, the jury asked questions, testing the contestants’ eloquence on the spot. The winners were chosen by a jury of distinguished Sciences Po alumni and Tilman Turpin, the director of Sciences Po Campus of Rems. Pauline Mornet, Euram 1A, won the contest, and will represent Reims at the Prix Richard Descoings eloquence contest in February. 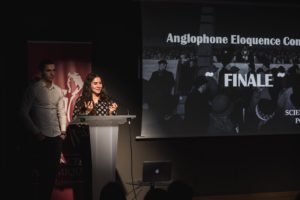 The contest began with Miko Lepisto, a first year Euram, considering the past and the future. He discussed the progression of society and whether or not this progression is positive. Suggesting that the listeners “fill the potholes of the future with the gravel of the past”, Miko made a case for appreciating the positives and negatives of the future and the past, but most importantly, the present.

In a change of tone Alexa Boncimino, Euram 2A, gave a heartfelt speech about the dangers of taking on too much. Comparing life to a box of chocolates, she enumerated the importance of savoring moments and taking care not to overwhelm oneself.

Following a suggestion of small-scale rebellion, Pauline Mornet, Euram 1A, contrasted this with an examination of the positive elements of hell and the devil. She gave the audience ten new commandments to follow in order to indulge the devilish side of ourselves.

Juan Pablo Brasdefer, Euram 2A, performed next, with a moving speech about his grandfather. He contrasted the emotional subject with the suggestion to do what makes oneself happy, citing the brevity of life as the reason to pursue what brings you joy.

Finally, Mariam Ben Slama, Euram 1A, closed the event with an exploration of the meaning of bizarreness. She concluded that everyone is bizarre, no matter how well it is hidden. She emphasized that was is most important is that people owe it to the world to show their weirdness. 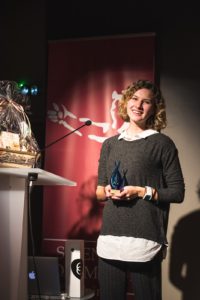 The event concluded with a performance by the campus a cappella group, the Vibes, followed by the presentation of the awards. While the jury made it clear how much of a challenge the decision had been, first place went to Mornet, second place to Boncimino and third to Brasdefer. The evening was an impressive showcase of the talent of the students of the Sciences Po Campus of Reims.