Sciences Po is trying to pass off as less elitist, and it is hurting its students

By The Sundial PressDecember 7, 2017 No Comments 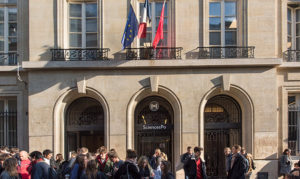 On Friday, October 24 first year students hurried into the new amphitheater that they already had the chance to discover a couple of days prior during their midterm exams. Even if the occasion this time was different, the experience would not turn out to be more pleasant than the last. During this one hour information session that brought various administration members from the Reims and Paris campus together, students would be introduced to another element of the Act II academic reform, which had already caused many students to voice their disappointment and outrage. This information session fuelled these strong feelings as we were presented the new project that Sciences Po had developed for its students: the civic learning program. Three words that would be the cause of headaches for first year students.

The idea is simple: make students engage with their communities over the course of their three-year bachelor’s program. In their first year, students must write a ‘civic engagement letter,’ which lays out their plan and project for the future and will be the reflection point for the following years; it will also be part of our bachelor’s thesis. The highlight of the civic engagement program is the internship that is to be completed the summer after first year. In our second and third years, when choosing our major we will also have to explain how and to what extent it relates to the project we laid out in our civic engagement letter. Finally, at the end of our third year in the “collège universitaire” we will have to think of our accomplishments and failures as part of our bachelor thesis in the context of this program.

You might think that there is nothing shocking or worrying here—but that is not true. While the idea of making students engage in their communities is all rainbows and sunshine, the reality is far from it. So, let us dismantle what the Sciences Po administration is trying to pass off as an amazing opportunity for students.

First, I want to take issue with the “civic engagement letter” that we are supposed to submit by  March. We are told to lay out our project, and to be as precise as possible when presenting our personal take on a social issue, and how we are planning on getting engaged in it. While this makes sense in the context of the civic learning program, it does not in the broader context of Sciences Po. Most of us came here with the hope of having some time before having to pick a definitive major, allowing us the freedom to explore, and discovering what suits us best before committing to one. Now we are told that, by the beginning of our second term of our first year at Sciences Po, we need to commit to a project that will accompany us for the better part of our first three years, which will be significant to our bachelor’s thesis.

Personally—and I believe that I represent the opinion of many by saying that—I am disappointed and angry. My humanities and law courses may be rubbing off on me here, but I do believe that when you enroll in a university you engage in a contract: most of us are paying high tuition fees to get the education we were promised. In this case it means studying various social science subjects and slowly but surely moving towards a major. By making us write a civic engagement letter, of which the contents will have to be related to our major this early, Sciences Po is throwing us into an existential crisis that we could have had experienced before enrolling in a more traditionally structured university, but chose to avoid when attending Sciences Po.

There is another significant problem that the civic learning program brought about: the new guidelines for internships. In the framework of this new program, we were told that we are required to take part in an internship that will allow us to be socially active and engaged in a community, and that we are not to sit in an office or run errands. You may wonder why I am disappointed by the fact that the Sciences Po administration is helping us prevent the stereotypical coffee runs and copy machine work. The reason is simple and it points to one problem that is representative of the civic learning program as a whole. The majority of Sciences Po students are aiming at a career on the international stage, be it the diplomatic world, the legal field, or the finance sector. Since these are highly competitive and selective fields that follow the rules of “survival of the fittest,” in order to prosper in our professional lives, previous experience is necessary, which is what internships are for. In fact many of us were counting on the mandatory internship to work in such a field in order to take our first professional steps towards our future jobs.

We choose Sciences Po so that we could have access to such internships and later to such jobs—but it is obvious that our dream jobs mostly do not take place outside of an office, which makes internships in their fields inadmissible to the civic learning program. Of course we could do two internships: one as part of the mandatory one for Sciences Po and the other one for our individual fulfilment. However, some of us were naïve enough to believe that after a soul-crushing and exhausting year of work, we would be able to sacrifice only one month of our summer holidays for work instead of two. Besides the fact that the new guidelines for the internship require most students to do double the internships and therefore double the work, the assumption that in order for someone to be efficient and useful to society, they cannot work in an office, is ridiculous. Doing the promo for a fundraiser is as important as collecting signatures on the street. One would not be possible without the other when trying to tackle a social issue, which is why Sciences Po students shouldn’t be forced into doing either one of them. Sciences Po’s administration is also in the wrong for a more practical problem this internship causes: in fact it seems that they have failed to consider the reality that many organisations where people will have to work do not pay interns. However, many students need and rely on paid internships and student jobs because of their financial situation.

Another aspect that seems disappointing is that for an institution that claims to encourage its students’ personal fulfilment, it certainly does impose on them a field of work even if it is only temporary. Even though I enjoy and entertain the idea that it is necessary to bring to light social issues among young adults, I believe that in our institution it is not as necessary as guiding students towards internships and experiences that will help their professional success. After all, we are at Sciences Po: if Sciences Pistes are not aware of social issues, I do not know who is. Besides dedicating an important part of our lives to discussing and fighting against social issues—be it in an active way or in an intellectual discussion, in an association or in our personal lives—we choose to study social science, which is a field of study that deals with complex social notions and issues. Making students take part in this “civic learning program” therefore seems superfluous, when they could be instead discovering other things and developing new skillsets that they cannot at Sciences Po.

The persistent question however remains “why?” Why would Sciences Po want to put its students professionally and personally at a disadvantage? I do not claim to know its ultimate motivation, but based on recent developments and narratives about Sciences Po, I do believe that it has to do with a desire to change the university’s image. It is often considered, especially in France and by the French,  to be an elitist and out of touch school. The criticism of the typical Sciences Piste has been harsher than ever especially since one of our dear alumni ran for and won the elysée. I understand why our school would be worried about its image. But Emile Boutmy did not create Sciences Po with the aim of it being accessible to everyone—he founded this school to educate and produce a political elite.

Neither Cambridge, Yale, nor Princeton apologize for being elitist, and since we at Sciences Po were ranked before those institutions for international and political studies, we shouldn’t be apologetic or ashamed about it either. Sciences Po is a distinguished institution, which is why every year thousands of young people fight their way through its doors. We came here to receive a world-renown education and to become influential in the diplomatic, political or finance world. The fact that Sciences Po is trying to change its image is hurting its students and putting them at a disadvantage with other universities that are proudly pushing their students towards the most prestigious jobs. The civic learning program is one of the disappointments of the new reform, and hopefully, it will be the last one.

Alina Yalmanian is a first year student, whose origins and nationality are too complicated to be explained in 2 lines. Plays the drums and practices martial arts even if she really does not look like it. On the Loose runs one Thursday every month.