Sex robots : a problem or a solution?

By The Sundial PressFebruary 22, 2018 No Comments 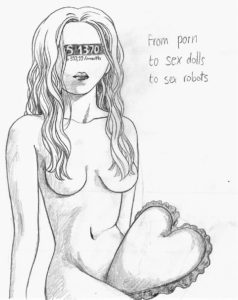 The solution to this? Again, debates vary across the board. One solution that has more recently come forward to deal with this urge that is felt by mostly men to be violent and degrading is sex dolls, and now in progress, sex robots.

I learned about sex robots about half a year ago in a video from The Guardian. In this video, Jenny Kleeman visits Reel Dolls in San Diego who claim to be creating “the future of sex”. There, they create hyper-realistic, customizable sex dolls; however it is to be noted that the vast majority of all buyers are men of both the female and male dolls. Every single detail is planned: the studio includes a large wall with every nipple shape and vagina type imaginable or for some like me, unimaginable. Kleeman was then shown the work in progress, the sex robots.

The creators of both sex dolls and robots will vehemently argue two things: one, that these dolls and robots are simply masturbatory tools that are obviously not human and thus no negative damage is possible; and two, that it’s better for men to perform violent acts against women on a doll or robot than on a real women. Both of these claims are disturbingly flawed.

For starters, both the sex dolls and robots are made to look as realistic as possible and are a means for men to create an “ideal woman”, thus further perpetuating unrealistic beauty standards on women that the porn industry already so effectively does. The robots are programmed to say out loud that their one goal is to please their owner and that they are willing to perform any fantasy. This is clearly projecting the idea into the minds of disturbed people, who are willing to pay up to $4,000 just for a doll, that women are sex objects intended and existing only to please men. In addition, treating these dolls with disturbing sexual violence and abuse is not helping men deal with their problematic and disturbing views of women. Instead of dealing with and getting over their urge to be violent, they are given a hyper-realistic female doll or robot to take out these impulses on.

Greta Baxter grew up in Moscow, New Jersey, and Paris. Her hobbies include everything involving dessert food, hiking, reading, watching TV shows impressively fast, all while trying to get at least 3 hours of sleep. ‘No Regreta’s’ runs once every month!