What the Heck is America’s Problem? Spoiler Alert: It’s Guns 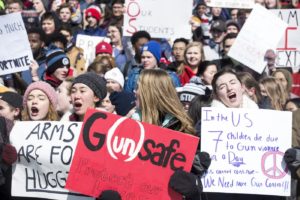 Unless you’re American, odds are that you think America has a gun problem, and odds are that you haven’t even heard of half the mass shootings that have taken place in the country. Since the Parkland shooting, which happened over a month ago, there have at least been fifteen mass shootings — there was actually one reported at Great Mills High School in Maryland as I was in the process of writing this article. These numbers, however, are something that we should be immensely proud of. Statistics show that, on average, the United States has one mass shooting per day. At just fifteen in a month, we’re only averaging half per day — we’re actually underperforming! So… woohoo, progress?

I’m sure nearly all of us on this campus can agree that the U.S. has a gun problem. I’d even bet that, unless you’ve lived in the States, you’ve probably never even met an American who was anti-gun control. Well, I’m here to tell you that those gun-totin’ Americans do exist, and not just on Fox News. Back home, they were my neighbors, friends, and family members. In fact, a real headline from a real local news organization in my county read: “To ward off mass shooters, Oswego County church encourages its congregation to bring guns”. I’m going to let the potential pun on ‘‘mass shooters’’ slide, out of common decency. Yes, Pastor Russell, a preacher at the Lighthouse Mexico Church of God, rocks up to mass with a glock tucked under his bible and wants all his parishioners to do the same. And yes, I know what you’re thinking — Oswego County is not in the South. I’m actually from New York, a blue state with some of the strictest gun laws in the country.

But nobody, especially the world’s most powerful country, likes to be told they have a problem. Public opinion on guns in America is almost evenly split, with a 2016 poll showing that while 51% of Americans supported “gun control” in the abstract sense, 47% favored “gun rights”. Although these numbers are extremely sensitive to fluctuation after whatever national tragedy hits the news that week, we can see that, over the long run, they tend to hold steady.

So where the heck does the gun problem come from? There’s a variety of factors at play, like constitutional roots, cultural norms, and an organization so nefarious it sounds like it came straight out of a dystopian novel: the NRA.

The Bill of Rights lists, right after the protection of freedom of speech, religion, and assembly, the following clause: ‘‘A well regulated Militia, being necessary to the security of a free State, the right of the people to keep and bear Arms, shall not be infringed.’’ This is the infamous Second Amendment, also known as the ‘‘Right to Bear Arms,’’ and for reasons listed above, it’s not going anywhere anytime soon.

The Second Amendment was obviously born out of a time when citizens needed to worry about the tyranny of the government. If we look back on the Revolutionary War, we can see many instances in which the British tried to disarm the colonists in order to ensure complacency. Nowadays, the only threats that a tyrannical U.S. government poses to everyday citizens are long lines at the DMV or outrageous sale taxes. There are no logical, modern-day scenarios in which someone would plausibly need to take arms against the state. The last time I checked, the only unarmed citizens are being shot by the police force in the street were African Americans — and 73% of them support gun control.

But, the argument for gun rights and the concern with protecting oneself from the state are logically linked for many Second Amendment enthusiasts. That’s why one popular slogan used by the NRA and its members is ‘‘Stand and Fight.’’

Now a logical Sciences Po student may be inclined to put their reading comprehension to good use and remark: ‘‘Hey, Isabel, the Second Amendment doesn’t seem to be protecting guns per se but rather something called a “militia”, which sounds like a totally different thing.’’ To which I would respond, ‘‘lmao, yeah.’’ The Second Amendment is 100% protective of a state militia through which citizens can protect themselves from the government, not individual armament. But the gun problem is more than just issues in legal interpretation — it’s a cultural phenomenon.

Earlier, I mentioned that the Second Amendment wasn’t going anywhere, and now I’ll explain why. You may have read a statistic that says there are about 88 guns to every 100 Americans — the most guns per capita in the entire world. The only country who comes close to us is #2, Yemen, which you may recall is in the middle of a brutal civil war. They have about 54.8 guns for every 100 people.
Now, the U.S. hasn’t fought a Civil War since 1865, so what gives? Why are there so many guns in America? Well, I invite you to think of John Wayne, James Dean or The Godfather — what do they all have in common? For these American icons, guns aren’t only normalized, they’re glorified. Guns are to Americans what cigarettes are to the French — sure, they may be dangerous, but damn they look cool.

Personally, I’d rather inhale second hand smoke for the rest of my life than ever have to experience a mass shooting, but that’s just me. Other Americans definitely do not share my point of view. Take, for example, rednecks — a term that could be synonymous to hillbilly or white trash, and typically refers to that conservative sector of the population which guided by backwards ideals on race and masculinity. Why am I using such a “vulgar” term in this article?

Because the term itself has been embraced and reappropriated by like-minded people all over the country — from the Canadian border to the Gulf of Mexico. TV shows like Duck Dynasty and My Big Redneck Wedding have become extremely popular recently, defining the self-pride of the movement. Redneck culture embraces, amongst other things, guns as a cultural and familial activity, and hunting as a way of life, and has become highly defensive of their rifles.

Even if there is a cultural gap when it comes to views on guns, there are still times in which we come close to an American consensus. Take, for example, right after the Sandy Hook shooting in 2012. After that, 89% of Americans were in favor of universal background checks on gun purchases. Similarly, after the Las Vegas shooting just last year, it was reported that 72% of Americans were in favor of banning bump stocks. In both of these cases, nothing happened. Why? It’s not just because Congress really sucks at its job (although I can’t rule that out).

Do you know what talks louder than the collective voice of millions of Americans? Money. Do you know what the NRA, or National Rifle Association, has a lot of? Just that. The Washington Post has published a database which illustrates the amount of money that the NRA has given to each state and its respective representatives since 1981 — the grand total is $4.1 million. And that’s not including donations that the organization has made to political parties, campaigns and not-for-profits.

The U.S. is also the world’s largest manufacturer of guns, housing 6 of the 9 top companies of the $400 billion dollar industry. The sale of arms thus not only has monetary consequences, but reverberations on the military and foreign relations. The Gun Lobby’s monetary pull has significant effects, as recent events have shown. Earlier this month, President Trump shocked everyone by unpredictably expressing interest in violating the due process. He exclaimed, ‘‘… take the guns first, go through due process second.” Just when the fear of actually agreeing with Trump on an issue had settled, Chris Cox, the top lobbyist for the NRA, tweeted, ‘‘I had a great meeting tonight with @realDonaldTrump & @VP. We all want safe schools, mental health reform and to keep guns away from dangerous people. POTUS & VPOTUS support the Second Amendment, support strong due process and don’t want gun control. #NRA #MAGA.’’ After that, Trump tweeted, ‘‘Good (Great) meeting in the Oval Office tonight with the NRA!’’ and just like that, he has never mentioned any possible implementation of gun laws since.

I’m certainly not the first American to admit my country has a problem, and I won’t be the last. In the month following the Parkland shooting, we’ve seen an outpouring of activism by younger and older generations alike. People are marching in the streets calling for change. So far, all we’ve seen is a bill in Florida which raised the minimum age to buy a gun to 21 in the state, banned bump-stocks, created waiting periods for gun purchasing, and a program through which teachers can be armed. We’ve also seen federal legislation proposed on school safety, which would similarly create a federal system through which to arm teachers, but the legislation has no mention of gun control measures. So, Americans have a gun problem, yes, and some of us are willing to fix it. But we have a long way to go before gun violence is finally put to a stop — and I, for one, am never one to be too optimistic.