An Inexperienced Guide to Hitchhiking 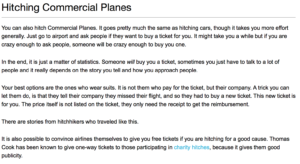 Yes, that is a real excerpt from www.hitchwiki.org. It is the bible for hitchhikers, with resources such as reviews of hitchhiking spots, organized by city (specifying the direction of travel) or by culture (discussing the hitchhiking culture of a particular country). While you do not have to start by asking strangers at an airport to buy you a ticket, the spirit will carry you wherever you want by land, with a thumb, a sign, and a smile.

But with the current transport solutions available, train, bus, plane tickets often at a cheap price, not to mention the rise of ridesharing such as BlaBlaCar, why hitchhike?

Before trying hitchhiking for the first time, part of my research before I embarked was speaking to Iyol Martinez, a second year student from Mexico, who has more experience and gives a fresh perspective. 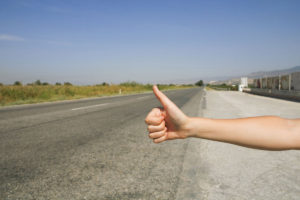 How and why did you begin hitchhiking?

I heard about a 3A hitchhiking, and having couchsurfed [an accommodation sharing community] widely,  decided to begin try it out alone. I recognised the added risk of doing it alone, but I wanted to immerse myself completely in the experience, and feel like I achieved something.

Where have you hitchhiked?

I have gone from Reims to Zurich, Reims to Germany, and Gothenburg to Malmo.

Where can I hitchhike from Reims?

There’s a good stop near Taissy, at the highway toll. From there, I have gotten rides with a notebook as a sign. When I went from Reims to Zurich it took four rides total, and getting to Strasbourg in six to seven hours, but it took us a while to get to Zurich. 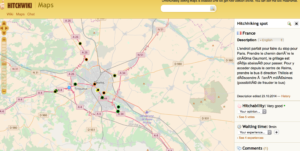 What was waiting for your first ride, then getting it like?

I wasn’t particularly nervous or scared at all, but I had a lot of adrenaline from the excitement of pushing my own limits and trying something new. If you’re truly scared you shouldn’t do it.

What was your most interesting experience on the road?

A retired Swiss man picked me up once. He told me his life story, and how he had worked for the companies of the signs that we passed. He wasn’t in good health, and I, from that, got the feeling that he was trying to do what he had always wanted to, for example picking up a hitchhiker, and just wanted to share his story. I felt special being a part of that. 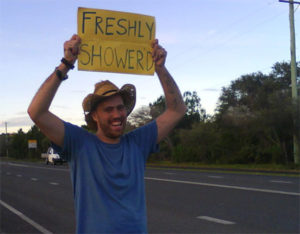 Is it more dangerous for women?

I personally don’t take any special precautions for my safety, although you can, like by sending your friends the license plate of the car. Although women are more likely to be offered a ride, this is because you are seen as a lesser threat, and weaker, but you can simply refuse a ride if you feel like the driver may pose a danger to you. What irked me most though, was when male drivers or other people I met travelling would hear that I was a woman travelling alone, they would say, “So what does your dad think?” or “Your dad lets you __?” Which shows another problem women face while travelling or hitchhiking.

Writer’s note: In some countries, women standing on the side of the road or at a gas station can be seen as prostitutes, especially if it is late at night or early in the morning. In these particular countries this can be avoided by only hitchhiking during daylight. Nevertheless, keep on your toes and aware of yourself and others. Despite the horror stories, hitchhiking, in my opinion, has become safer than it was before. We are now armed with more resources, and have instant connection if in danger.

So what does hitchhiking mean to you?

I love the feeling of not having to be anywhere, and you can take your time to get from Point A to B. It’s a beautiful experience because you’re entrusting your life to someone, someone who you would often have never encountered otherwise. It restores your idea of humanity: that there are still good people in the world who are willing to share what they have. I encourage everyone to experience the human side of people. At school we are often not sufficiently in touch with humanity, and hitchhiking helps us break out of our fairly insular and materialistic immediate community. 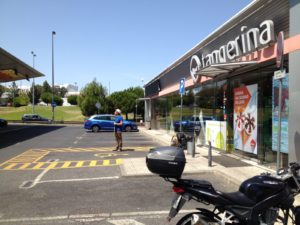 I too had an eerie calm and self-assurance as I was waiting for a ride, but differing from Iyol, I hitchhiked by asking people for rides rather than waiting at the entrance/exit points of the gas station. Waiting means you can refuse a ride and you won’t feel intrusive, but asking people means you can make the initial judgment and control where you go (by looking at the country/region of their number plate).

I was extremely lucky to catch a ride straight from Berlin to Antwerp (some 700km), with a retired man who liked doing road trips alone. A hippie in the 70s, all he did was “smoke, listen to Bob Dylan, and protest the Vietnam War”, and hitchhike throughout Europe in the summer. We spent a lot of time together: he bought me water and coffee, had to take a smoke break every two hours, and even offered a room for the night (I politely declined). But most importantly, he noted that there is a decrease in trust in contemporary society. We expect our actions, even sometimes with generous intention, to be remunerated. There is no longer a strong system of trust and sharing, and we can no longer deal with the unknown and the unexpected.

If you are bold enough to do it, you’ll find yourself thrust into an ideal atmosphere to becoming more in touch with yourself and the community.