By Teresa ArtjokiFebruary 8, 2019 No Comments 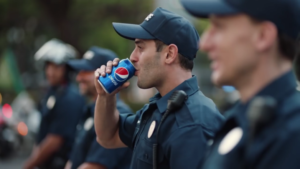 Photo: A policeman drinks a Pepsi Max during a Black Lives Matter Protest. If only police brutality could be put to an end with a soft drink. Photo: newstatesman.com

The Gillette toxic masculinity commercial has yet struck another cord in the debate on whether profit-seeking firms should be able to capitalize on social justice issues. There has been a rise in popularity of advertisements that market their products with the help of social justice movements.

Recently, with the Kaepernick advertisement, the brand NIKE aligned itself with the Black Lives Matter Movement (BLM). In response, many conservatives who did not agree with the political stance burned their Nike equipment.

More recently, Pepsi Max used similar advertisement tactics, depicting a civil right activist group confronting the police. The tension was defused by the supermodel Kendall Jenner offering a soft drink to the police. The imagery echoed recent Black Lives Matter marches, which were met with police brutality. With their ad, Pepsi Max not only co-opted the movement and everything it stands for in order to promote its own commercial agenda. It also cheapened the issue the movement fights against (systematic racism), and the lives of those affected everyday.

However, we also hold non-woke ads accountable for their messages. In fashion, criticism of unrealistic beauty standards has slowly lead to a relatively more body positive agenda. Especially today, adverts must feature something else than thin, young, white women in order to reach the basic standard we set for apparel marketing.

Whether we like it or not, we do hold ads up to certain standards. We recognize that even profit-seeking corporations have a social responsibility in the images and narratives they present.

So where do we draw the line? The Gillette outrage was a call for a razor corporation to stay in their lane and to not capitalize on large social movements. But it’s worth pointing out that the Gillette slogan used to be “a best a man can get”. People seemed awfully comfortable with the razor-company aligning its product with the fulfillment of masculinity.

How do we justify the past Gillette ads that linked their product with heterosexual and masculine sex appeal? When did we agree that gender and sexuality are in the lane of profit-seeking companies, but social issues are not?

Millennials in the United States are more conscious of the political and ethical aspects of their consumption, and hoping to target this demographic, companies engage in ‘woke advertising’.

Woke advertising concerns much more than a particular set of social issues. Companies such as New Balance or Under Armour have publicly aligned themselves with the Trump presidency, and were met with a boycott. Yet the issue of companies aligning themselves politically was not raised nearly to the extent it has been with advertisements expressing liberal, social justice opinions. Is the problem that companies align themselves politically in general, or is the problem that companies express opinions we disagree with? Perhaps it’s something else all together.

Last year, McDonalds launched a vegan burger in Sweden and Finland, and many other fast food chains followed. Now, this can be criticized as greenwashing – that the chain is capitalising on the veganism fad. One may question if McDonalds is going to be more committed to sustainability or animal welfare. The answer is probably not. On the other hand, the vegan option of a popular fast food chain also has the power to significantly increase the visibility of vegan food, and make it a lot more accessible even at 4am.

Similar criticism is made especially during Pride parades, a political movement seamlessly and ruthlessly co-opted by corporations. Them publicly aligning their corporation with Pride marches comes in an era when it is convenient for them to do so, in a more and more acceptable climate. Just like with Feminism or BLM, it debases the political movement by using it as a backdrop for commercial purposes.

All these political movements have a long history of struggle and are usually at the receiving end of violence. Faceless, wealthy corporations profiting off the struggle of individual people mobilizing for social justice is another form of oppression. What incentivises the companies to express certain political opinions is their current popularity. Yet what allows for this popularity is the people who have risked or lost their lives standing up for these movements.

Corporations today, whether we like it or not, have an unprecedented platform and ability to

I hear the more revolutionary among us already calling for the downfall of capitalism. But let us entertain the idea that the advertisement industry isn’t going anywhere for now. So, what do we want it to look like?