Any avid traveller who moonlights as a foodie knows that a trip’s restaurant itinerary must be well-researched. After all, getting to the best joints in a given city sometimes requires getting a reservation a couple of weeks in advance, standing in line for several hours, or even sweet-talking the moody hostess at the front of house from time to time. If such monumental efforts shall be made in order to delight in the most amazing delicacies, one should keep in mind the “hidden cuisines” of a city. The kind of food that’s not really local, but everyone swears is better than the origin culture’s best rendition. 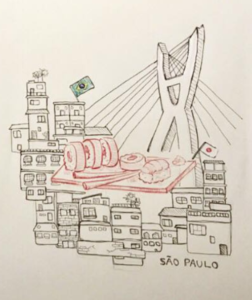 According to statistics put out by the Brazilian government, there are 1.6 million people of Japanese ancestry living in Sao Paulo today, making it the biggest Japanese community outside of Japan. It is no surprise to find that the sushi in the city is of near-Japanese caliber. Located only two hours from the sea, the city receives an extremely fresh supply of fish in order to make all kinds of rolls. From a traditional maki to the quintessentially Brazilian “Hot Roll”, you will find a restaurant to suit your fishy needs. If you ever find yourself in the Paulistano concrete jungle, pop over to Kosho Japanese Cuisine for a traditional Japanese dinner experience with a modern touch; it comes highly recommended by the local and international bubble alike. 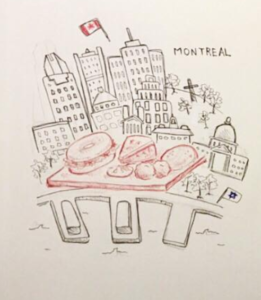 Alternatively, some cities have cuisines that thrive despite the fact that the original creators of the food are not as plenty. Montreal has only about 100,000 Jewish citizens, but Jewish food itself thrives in the city. From Jewish delis to bagels (yes, they’re Jewish in case you didn’t know), there are many places to choose from which might tickle your fancy. Some of these places are so iconic even celebrities stepped in to vouch for them. Schwartz’s, arguably the most iconic Montreal Jewish deli boasts pictures on its walls of even PM Trudeau himself. The place is so loved that when it was about to go under circa 2016, Queen Celine Dion single-handedly saved the place by partnering with the then owners. If two iconic Canadians approve, this place is worthy of any measly traveling college student.

Another city with famous hidden cuisine is London. Legend has it that the first Indian restaurant in the city opened 200 years ago. Hindostanee Coffee House was the first of its kind to be dedicated only to curry. Between drags on hookah pipes, the Londoners of the colonial times could enjoy a hearty dish filled with all kinds of spices. Since then, the Indian population of London has grown exponentially, becoming a breeding ground for the most amazing selection of Indian food. Though any place you wander into will surely be a hit, Dishoom always comes highly recommended. Their modern twists on traditional food satisfy the biggest spice enthusiasts to the ones who like to stay on the safe side. Pair your dish with a side of still warm garlic naan, and you’ve got yourself a winning a combo that’s just right. Be careful though, they’re so popular you might end up waiting quite a while if you don’t make a reservation.

So, when planning the next foodie journey on your calendar, don’t forget to check out whether the cities you are headed to have any “hidden cuisines”. Who knows, maybe you’ll find yet another place to travel to.

Ana Sofia Thomas Ibarra is a Mexican American second-year student at Sciences Po. A creative spirit, she is a writer for the Travel Section of the Sundial Press. She doesn’t really know what she’d like to do in the future, but she loves writing and hopes there’s always a place for it in her life.