Lyrics of Resistance: the Paramount Role of Hip-hop Musical Culture in Brazil’s Periferias

By Eduarda RezendeNovember 23, 2020 No Comments 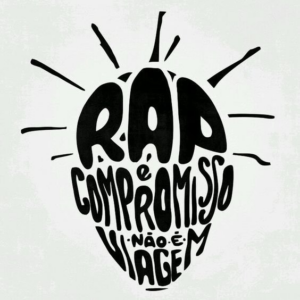 Hip-Hop culture was initially founded in the 1970s by African, Jamaican, Latin-American and Afro-American communities in New York. Within it we find four main subdivisions: Rap, DJing, breakdance and graffiti. These are characterized by a multicultural exchange of beats and styles, and aim at using art as a way to denounce societal flaws and failures. Since its origin in the South Bronx, hip-hop culture has spread nearly everywhere. In Brazil, the movement began to gain popularity later in the decade.

Until very recently, hip-hop culture was mostly consumed by the most impoverished regions within the cities, the so-called “periferias” (EN: peripheries), where discrimination is an every-day reality, and there is easy access to guns and drugs. The first experiences Brazil had with hip-hop musical culture reflected on the need to politicise the youth and speak out about issues such as police violence and  a lack of necessary infrastructure. Over the years, social demands have changed, and lyrical themes have followed suit. However, the role hip hop culture plays in local communities has remained essential.

As noted by Andrade (1), Hip Hop as a social movement “allows the youth to develop political education and to, consequently, exercise their right to citizenship” (free translation). Traditional social movements often fail to bring about significant change in the lives of the underprivileged Brazilian youth. Not for lack of willingness, but simply because youngsters’ minds are not as easily accessible. Young people listen to other young people and learn by influence, and that is where Rap artists successfully guide thousands of teenagers and young adults through life. Famous rappers and groups, such as Racionais MC’s, Facção Central, MV Bill, and Emicida, talk about their daily life experiences and struggles, making their lyrics particularly relatable to this population.

These lyrics are a tool for young people to fight off racial discrimination through the power of words and get involved in the artistic world. The Hip Hop movements in Brazil’s periferias most commonly adopt a nonviolent approach when fighting social causes. Primarily inspired by pacifist leaders, such as Gandhi and Martin Luther King Jr, they drive each other away from organised crime and gang culture, and engage themselves in public political debate, giving a voice to those who are poorly represented. Of course, to be politicised or to merge art and politics does not mean to be directly involved in politics and policy-making. But hip hop culture still allows these young people, who generally feel left-behind, to find a way to reinsert themselves into society.

Hip hop culture, be it songwriting, DJing, or graffiti, allows young people to demand better living conditions publicly and to shift the changing power back to the people, rather than from the state or institutions such as the church, universities and political parties. Brazilian Hip Hop artists’ platform has grown significantly over the years and is no longer restricted to the periferias. The middle and high classes have started to consume hip hop culture (2), which has made them more aware of the hardships of certain social groups, and more willing to contribute to social causes.

The new wave of Brazilian rappers and their themes

Since the 1980s in Brazil, Hip-Hop – especially rap – has been fighting against police violence and the lack of basic sanitation, and remains an essential tool in the organisation of the population that lives in the most precarious conditions throughout the country. Artists and groups like Racionais MC’s, Facção Central, MV Bill, Dina Di were crucial to the consolidation of Hip Hop in Brazil. Lyrics that were pure protest shocked the middle class at first, as they report the reality of the peripheral daily life. Some rappers even had to answer to the police, as their music made apologies to crime and violence. Over the years, new names such as Emicida, Flora Matos, Projota, and Rashid have emerged. Influenced by previous generations, they preserved old themes – such as the denunciation of crime and violence – while incorporating new subjects. Since then, rap has become a source of empowerment to black people and women.

During this summer, for instance, influenced by Black Lives Matter protests in the U.S., Brazilian rappers have been keen on the fight against systemic racism in Brazil. Edi Rock, rapper in the group Racionais Mcs, released a single on June 10, called “Vidas Negras” (EN: Black lives), which aimed at voicing the community’s outrage at the death of teenager Joao Pedro (3), who was murdered by the police in his own home. This all imbeds itself into a larger context of outcry over daily violence faced  by Black people in Brazil – and the rest of the world. According to the rapper, “O momento de ataques contra o povo negro pede posicionamento e atitude. No meu caso através da música, através do rap” (quoted on Von Borell, 2020) (EN:“The moments of attacks against Black people demand positioning and attitude. In my case, through rapping”).