By Rebekah SeowJanuary 3, 2021 No Comments 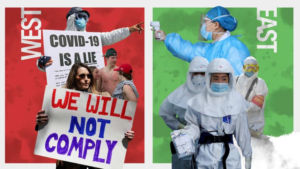 The dIfferent responses to COVID in Asia and in the West. ABC News: GFX/Jarrod Fankhauser

While government measures, such as increased surveillance, have led to protests in Western societies, cultural differences have resulted in divergent responses in Southeast Asia. In particular, some commentators have even credited the compliant nature of the region’s population for its relative effectiveness at tackling the pandemic, citing that they are more likely to sacrifice personal freedoms for the “collective good”.

For others, this compliant nature has instead allowed governments to trample on human freedoms and to centralise control. Even prior to the pandemic, Southeast Asian governments, such as Cambodia and the Philippines, have been called “illiberal democracies”, as they respect democracy in a strictly procedural sense, while still withholding certain freedoms.

However, the participation of the populace has increased in recent years. The prevalence of social media has influenced the population to seek more traditionally “Western” freedoms. How true, then, is the belief that the region’s population is still passive toward the partial restriction of their freedoms? How have individuals reacted to the consolidation of power, privacy concerns, and restrictions on freedoms in Southeast Asia?

The Covid-19 pandemic as a means to consolidate power

Various political leaders have leveraged the pandemic to gain additional power and eliminate political enemies. In Thailand, Prime Minister General Prayuth Chan-ocha further centralised the government, bypassed politicians and authorised the Royal Thai Armed Forces to oversee security measures during the period of emergency. Moreover, Philippines’ President Rodrigo Duterte filled his Covid task force with military and police officials, who arrested relief workers that had criticised the government. Many suspected that he was laying the groundwork for Martial Law.

How have citizens responded to such developments? In the Philippines, the largest Covid-19 epicentre in Southeast Asia, Duterte’s approval and trust ratings rose to 91 percent in September 2020. Supporters are satisfied with his “decisive leadership” including his imposition of lockdowns across the country. However, despite these mounting approval ratings, he is known for his merciless rhetoric: for example, he has invited police to “shoot [those who violate quarantine] dead”. That said, given Duterte’s censure and prosecution of dissenters on social media, a possible reason for the high ratings could be respondents’ fear of repercussions.

Although protests took place in Manila against Duterte’s handling of the pandemic, they were relatively minute compared to the months of protests that were seen in Thailand. On  September 19th, more than 10,000 pro-democracy protesters took to the streets of Bangkok to demand Prayuth’s resignation along with the desire for a more democratic constitution. These protestors comprised a large number of young people who went as far as to demand monarchical reforms, despite Thailand’s strict lèse-majesté laws in place, which make it illegal for anyone to insult, defame or threaten the monarchy. This protest was the country’s largest in six years and makes the discontent of the population towards the Thai government’s policies obvious.

From the approval of Duterte to the protests in Thailand, we can see that the responses towards authoritarianism in Southeast Asia have been diverse.

Apart from centralising power, Covid-19 has also opened a can of worms when it comes to privacy concerns, as governments have put tracking measures through mobile applications in place to implement contact tracing policies. For instance, the Singaporean government made a TraceTogether Token available, in addition to a TraceTogether mobile app. The token is a device that exchanges Bluetooth signals with other TraceTogether Tokens and TraceTogether apps, allowing the government to track one’s location at all times. This is alarming, as the safety of individuals could be seriously threatened if this technology were to be misused. Adding to the concern is the fact that both the token and the app will be made mandatory from December 2020 forwards. Meanwhile, in Indonesia, the government launched the Peduli Lindungi app for a similar purpose.

While concerns have been raised over individual privacy, the token and app have not ignited much concern amongst the Singaporean population. As of October 21st, 45 percent of the population had downloaded the application, and this does not include those who are registered through the token. The government has repeatedly assured that the data would be handled sensitively and the people’s indifference to the issue of data privacy reflects their dependence on “good governance”. In Indonesia, in spite of the lack of transparency regarding the collection and regulation of the data, there has not been much opposition to the measures based on concern over privacy issues. Apart from letters by human rights organisations urging the government to write a clear privacy policy, there is no major dissent.

Generally, there is a view that the collection of data and even authoritarian measures are necessary for contract tracing and to prevent the further spread of the virus. This could imply that the region’s population is effect-oriented – so long as the ends are achieved, they would accept the means of getting there, even if it meant encroaching on some of their freedoms. In fact, the political legitimacy of most Southeast Asian governments has rested on economic performances since independence, regardless of the state of democracy. Hence, the means of controlling the virus, as long as it is effective, would not be as important to the population.

“My body, my choice!” It has not been uncommon to see protests in Western countries deriding lockdown and mask wearing mandates. Many believe that these policies encroach on their freedoms. This can be juxtaposed with Southeast Asia, where lockdowns and mask-wearing measures were promptly adopted, and were faced with much less resistance, allowing for effective management of the pandemic. Here, we can consider the case of Vietnam.

Vietnam’s handling of the crisis was among the most efficient in the region. The first Covid-19 case was detected on January 23rd. A week later, on January 31st, restrictions had already been placed on public mobility, and on February 1st, schools were closed nationwide. Similarly, Laos’ first case was detected on March 24th, and just five days later, the government announced a strict lockdown and closed all borders. Since April, Singapore has been one of the many countries in Southeast Asia that has made mask wearing compulsory.

While protests and free speech have always been limited in countries like Vietnam and Laos, criticism towards the government would usually still surface online. However, this time, dissenters have largely been silent. It appears that most Southeast Asians believe that the government measures are appropriate. Additionally, even prior to the compulsory measures, many voluntarily wore masks to prevent the spread of the virus.

The attitude of Southeast Asians, however, should not be viewed as blind obedience. The memories of SARS (Severe Acute Respiratory Syndrome) – also a coronavirus – that hit Southeast Asia in 2003 is still fresh in people’s minds. Coupled with a deep mistrust of China, particularly in Vietnam, the region’s population was motivated to take the pandemic seriously, and they willingly accepted strict government restrictions.

We can recognise that protests against authoritarian power is evidence of the people’s voice. But it must be noted that while Southeast Asians are not completely compliant to government directives, they generally tend to trust authority. Yet, whether this will lead to more liberal political change is another matter. In reality, it is quite unlikely. Past region-wide crises such as the 1997 Asian financial crisis have shown that even new administrations may retain authoritarian power. Indeed, the collective mindset of the region’s population which prioritises collective good over individual concerns, and a historical context of past long-term colonial rule poses obstacles to liberal democratic reform.