Hit enter to search or ESC to close
EuropeForeign AffairsHomepage

Italian Senate Crushes Anti-Homophobic Law: What Does This Mean for Italy and its Future?

By Elena MugliaDecember 6, 2021 No Comments 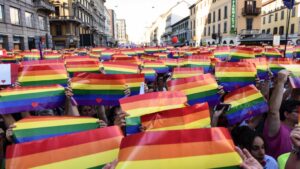 Silence in the Italian senate after six hours of debate was broken by senators zealously clapping after burying the DDL Zan, painting a grim picture of modern-day Italy. This picture, however shocking, is anything but new. The failure to pass this piece of legislation simply scraped off a coat of paint, exposing an increasingly conservative and regressive Italian political sphere.

The DDL Zan is a piece of legislation aiming to make discrimination against the LGBTQIAP+ community, disabled people, and acts of misogyny a crime. It is important to note that political debates have mostly focused on the clause addressing the queer community, but the political implications extend to communities facing ableism and sexism. On October 27th, 154 Senators voted to veto the legislation against the 131 who voted ‘no’.

The Disegno di Legge (DDL), which was introduced by Democratic party member Alessandro Zan, attempts to amend the 1993 Mancino law against discrimination on the basis of race, religion, and ethnicity. The DDL Zan would add provisions against homotransphobia, making it punishable by up to four years of imprisonment or community service. The law was originally passed in November of 2020 by the lower chamber of parliament, after persistent opposition by  the main far-right parties la Lega and Fratelli D’Italia.

The most significant dissident that consistently objected to the law since its inception was the Italian Catholic Church, which holds a vast amount of power over Italian society and politics. The involvement of the Church was conspicuous and unprecedented in modern times. In June, Pope Francis demanded the government revise the law out of fear that it would restrict freedom of speech as the law aims to criminalize homophobic language.

The Church’s unusual intervention provoked Prime Minister Mario Draghi to  reprimand the Vatican, saying that ‘Italy is a secular state.’ This self-evident statement serves to remind the Pope of the independence of parliament from the Church and its liberty to discuss and legislate. Draghi also emphasized that ‘secularism’ does not signify indifference towards respecting religion but rather ‘the preservation of pluralism and cultural differences’, indirectly addressing the DDL Zan’s attempt to safeguard the rights of various communities.

This intervention did not impede the discussion of the law in parliament. Nonetheless, it confirmed the cultural and religious friction that has stalled Italy in its uphill road towards universal civil rights. The Vatican’s interference also legitimised popular views that the law infringes on freedom of speech.

The Church’s involvement in the DDL Zan epitomizes the intensified collusion between religion and politics due to the rising popularity of far-right parties. Prominent leaders such as Matteo Salvini, the Federal Secretary of the far-right party la Lega and former Prime Minister, have displayed the cross and rosaries at political gatherings. Considering that 83.3% of Italians identify as Catholic, this reference to religion is an effective strategy to gain popular support. In fact, an estimated 40% of the most devout Catholics oppose the law.

Youth Activism and the DDL Zan

Despite major opposition on the political front, over 60% of Italians are in favour of the legislation, with the youth constituting the majority of supporters. The youth has led the protest movement around the DDL Zan: first demanding the parliament adopt the law and then rebuking the Senate’s burying of the law.

The sentiment behind the youth’s protest movement is encapsulated in queer youth activist Sofia Bandini’s disclosure that “this law would have made [her] feel safer.” She argues that the DDL Zan would have “made [her] feel like a citizen, equal to the rest, who deserves the same amount of protection from the government.” Instead, with its failure to pass the law, the state has left the community legally defenseless and has turned a blind eye to homophobia.

Rete Studenti, a union made up of Italian high-school students, has thus ardently campaigned for the passage of the law through protests, assemblies, and photomobs. Camilla Velotta, the coordinator of the Rete Studenti, has furthermore expressed that ‘the burying of the law symbolises another missed opportunity for Italy to disprove the common narrative of its slow progress in terms of civil and political rights.’

Italy made same-sex unions—not same-sex marriage— legal in 2016, but lags behind other European countries in equity without any anti-homophobia measures.  In this way, youth activists protested the burying of the DDL Zan as they argue it represents the Italian government’s failure to seize an opportunity to ensure civil rights and raise Italy’s political standing.

Importantly, activists emphasize that the passing of the DDL Zan would not have truly addressed the infringement of rights suffered by the queer community. At its core, a change in mindset througout Italy is necessary to combat this hatred and discrimination.

This change in attitudes and mentality can be achieved, as argued by Rete Studenti, through education. Italian high-schools have a conservative approach to education which often fails to address crucial modern-day issues. Velotta conveyed the need for an ‘education on sexuality and affection which is secular and inclusive, and which goes beyond being strictly heteronormative.’ As evidenced by the widespread conservative political opposition against the DDL Zan, Italy’s youth will need to spearhead these changes. The progress of the country is in their hands.