Hit enter to search or ESC to close
Campus LifeCOVID-19HomepageOpinion

The Future of Universities after COVID-19

By Henri JacksonDecember 6, 2021 No Comments

Home » The Future of Universities after COVID-19 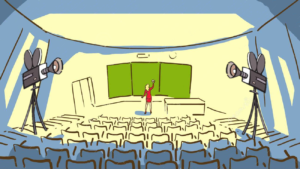 Before beginning my undergraduate degree at Sciences Po, I was a law student in Berlin. My classes started in the fall of 2019, the last months in blissful ignorance of the impending pandemic we can only wish we had seen coming sooner. Little did I realize at the time, I was already witnessing a transformation of university life, one that has been forced to exponentially accelerate due to COVID-19’s restrictions. Nearly two years later, as students have returned to their campuses lured by the promising scent of a return to normality, we must remember that time has not stood still. After such a period of dramatic upheaval and strenuous adaptation, university life will never be the same, perhaps for the better and perhaps for the worse.

I walked into my first law lecture filled with enthusiasm. It was a satisfying compensation for years of hard work in high school, met with the nervous excitement of starting a new chapter of my life. I was shocked by what our law professor had to tell us on our first day. He suggested we watch the online civil law podcast done by the law faculty in Munich instead of attending his very own lectures. This podcast presented the content of the class “better than he could possibly present it.” I spent the following months alone in front of a screen listening to recordings produced a year or two prior by someone I had never seen in person, freely available to the public on the website of a university I was not even enrolled in. I later spoke to a friend whose sister was studying law in Heidelberg. She had also listened to the entire series. As far as I could tell, every law student in Germany was following this podcast the same way an entire country might binge-watch the same Netflix series. This was the best that the centuries-old tradition of higher education in Germany’s most respected universities had to offer. The digital transformation was changing university life right before our eyes, even before the word corona meant anything more to us than a Mexican beer. In hindsight, I see these developments were merely in their infancy.

I need not outline in great detail the many ways universities and schools were forced to adapt due to the pandemic. Sciences Po invested immense sums in equipping every classroom for hybrid learning with state-of-the-art cameras and screens, not to mention issuing Zoom licenses to every student, shifting to 24-hour exam formats, and at times limiting access to the campus entirely. Although a purely online form of education has proven unsustainable and utterly undesirable for many students and teachers alike, the pandemic has left universities worldwide equipped to embrace new technological opportunities previously unimaginable.

Education can now be mass-produced on an unprecedented scale. Lectures, once secrete and secluded by the educational elite to be enjoyed behind closed doors, can now not only be broadcast live instantly all over the world but also stored for generations to come. This mass-production of learning materials has the potential to massively democratize access to academic experts. Anyone could tune into Harvard’s Nobel Prize-winning economist, or in my case, Germany’s civil law guru from Munich. I am not necessarily talking about the lecture recordings we had to endure last year, where teachers recorded from home with bad sound and poor lighting. I am talking about professionally recorded lectures with interactive elements included that have been highly coordinated with entire faculties and teams of technicians. After the pandemic, most every university has invested in technology to make this possible. Interactive online university degrees are already becoming increasingly available, take for example the University of Phoenix, a purely online college that claims to help you “earn your degree faster, and for less.” It is now only a matter of time until the world’s leading universities offer their own.

Why would universities do this? If there is one thing we all learned from the pandemic, it is that no one wants more online classes. However, we must remember, even universities are financially driven, and so are students. From their perspective, such an option is very cost-effective: one that can be scaled up with no increasing marginal cost. There is a one-time investment in the production phase of such a course (one that is already been greatly reduced since universities have invested in the technology during the pandemic), and after that universities can use it year after year. They also could admit exponentially more students to their programs, as they do not need to host them on campus. This might also finally solve the student debt crisis, which again has been called into the spotlight during COVID-19, forcing universities to lower their absurd tuition fees or at least offering an affordable alternative for students not quite as well off. It could also facilitate people returning to university later in their lives, something today considered unconventional and quite daring and risky. In a slightly provocative and utopian thought experiment, anyone in the world with a stable internet connection could graduate from Sciences Po for spare change regardless of geographical location, and Sciences Po would make incredible profits. We could educate the world, one video at a time…

Where universities are already free but often underfunded as a result, they could reinvest their budget to include more intimate, hands-on seminars with the money saved. After all, it can be quite nice to learn the large amounts of information presented in lectures at home at your own pace, rather than struggling to keep up in an overfilled lecture hall. With their spare time, professors could offer more interactive Q&A sessions, during which students could ask more meditated and challenging questions. How many times has a professor asked you at the end of the lecture, “any questions?” only to be answered by the sound of crickets?

The Centralization of Knowledge

However, digitalization is not all a bed of roses but could have serious implications for the world of academia. Education and knowledge are already becoming increasingly commodified and subject to the rules of a capitalist market, in which there are winners and losers. Everyone will want to attend the best universities with the best professors who stand out in the digital format. Students will herd around the courses with the best advertisement campaigns and gravitate towards the leaders of the market. In the end, knowledge could become incredibly centralized. Everyone will learn from the same professors, take the same classes, and stand-point diversity and academic confrontation could become increasingly scarce. Not only does this imply the incredible danger that those who dominate this new market for knowledge could impose their ideologies and perspectives, but is it not diversity of opinion and academic debate that brings the human race forward? This centralization of knowledge may take place across a geographical dimension, but also a temporal one. Could the availability of reusable video lectures keep us locked in the past, disincentivizing our education to evolve as the world changes around us, as new questions arise that desperately need answers? This is especially true in medicine where new techniques and theories are being discovered annually.

Additionally, the very profession of the academic could be at risk. While the Nobel Prize winners could reach a wider audience and spread their knowledge to the greater public, scientists of all fields are often reliant on part-time teaching to finance their research. As these jobs get replaced in this digital education revolution, the positive externalities of their work as teachers get lost. The world’s greatest thinkers might be out of a job, forcing their research to a screeching halt, and new generations might have less incentive to pursue such academic careers. Even Nobel Prize winners were once teachers as doctoral students. This shift in the labor market for academics also has implications for the students. Even if access to education could be democratized, new forms of inequality could emerge. Increased access merely fuels the phenomenon known as “degree inflation”, which can have an adverse impact on workers and employers alike and slow the economy. Additionally, as in-person classes become more scarce and in higher demand, there could be increased inequality in access to truly elite in-person education.

Of course, most of what I wrote here is highly speculative. After all, as long ago as 1922 Thomas Edison predicted that “the motion picture is destined to revolutionize our educational system” and that “in a few years it will supplant largely, if not entirely, the use of textbooks.” Although progress has been more steady, we must always look ahead and try to address the challenges and developments of tomorrow before it is too late. After all, I think we can all agree that university is more than a place we attend lectures. It is our first experience away from home, our first taste of independence. It is a place where we learn maturity and responsibility. It is a place of social interaction that fosters intellectual curiosity, innovation, and diversity. As the pandemic offered us a taste of an alternative, dystopian vision for the future of universities, it perhaps also reawakened our sense of what education is truly about. In the ideal case, we can now move forward in carefully constructing the best of both worlds.