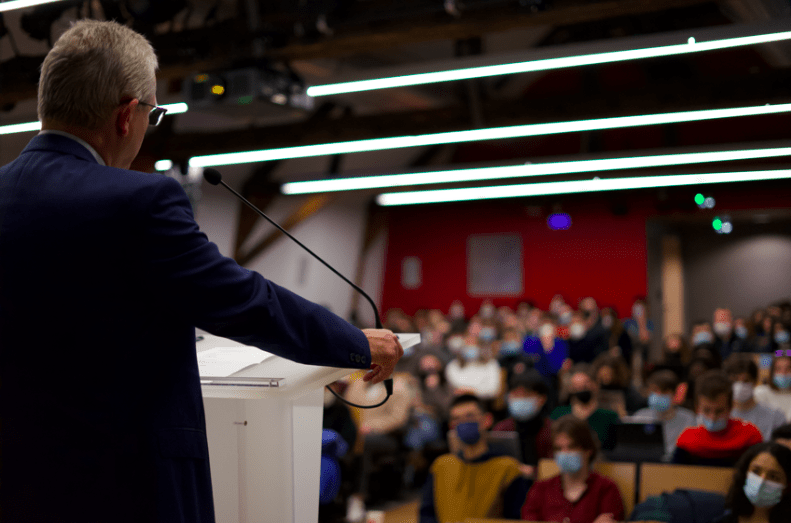 Général Mercier’s Visit to Reims: an Inauguration of the Sciences Po Defense and Strategy Association

By Monica SchneckFebruary 16, 2022 No Comments

On Monday, February 7th, Sciences Po students filed into the I302 amphitheater as usual: a bit tired, laptops in hand, and awaiting the lecturer. This time, they were greeted by General Denis Mercier, former NATO Supreme Allied Commander Transformation, delivering the inaugural seminar for the Sciences Po Defense and Strategy conference series. His presence in Reims was apt considering our bilingual campus, its proximity to Paris, and Europe-America program. The location complemented well his theme of “Geo-strategic Challenges to the Euro-Atlantic Region.” Beginning his career as a fighter pilot, General Mercier rose through the ranks of the French Air Force and then through NATO before being appointed to Supreme Allied Commander Transformation in 2015. Due to his years of firsthand experience in transatlantic relations, the Reims campus warmly welcomed General Mercier to impart his wisdom.

Unfortunately, due to the Chatham House Rules, the details of what was said during the conference cannot be shared. However, for those in attendance, the seminar proved highly compelling given its context and background within the school. This conference was the first event held by the Reims branch of the Sciences Po Defense and Strategy Association, which has been a well-developed and dynamic club on the Paris campus for years but only recently expanded to Reims with its first affiliate branch. This inaugural conference of the antenne Rémoise of SPDS “arises from the will to propose high-quality events and speakers to Sciences Po students on ‘the campus en régions,’” according to Blanche Fleury and Marine Baillot d’Estivaux, the student heads of SPDS in Reims. This event also reflects the wishes of Director M. Mathias Vicherat, who aims to bring more qualified speakers to the regional campus and balance the disproportion of speakers compared to Paris. 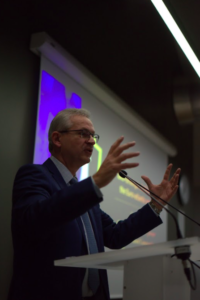 Such a successful launch of the SPDS as an offshoot of the original branch in Paris proves there is a lot to look forward to from this association. The goal of the Reims branch of SPDS is to open up spaces for education, debate, and discussion around topics of security-defense – a subject area many students are interested in but may not have the resources or space to learn about and discuss. Additionally, SPDS intends to give an introduction to professional possibilities in the field of security, strategy, and defense, which is a potential source of internships, masters programs, and careers for students. SPDS is materializing these goals through two exciting events they have planned: a meeting with French officers in mid-March and a visit to a military combat training facility towards the end of the semester.

To return to the original conference of interest, General Denis Mercier concluded his time on our campus in Reims, having offered his wisdom, experience, and well-informed predictions of the future to Sciences Po students. The Sciences Po Defense and Strategy Association had completed their first conference successfully with a speech from a fascinating and qualified individual, and at the end of the night, students filed out of the amphitheater having reflected on the role of NATO and with more tools with which to consider challenges to the Euro-Atlantic region.