International development is a tentacle of political and economic liberalism that has its roots in this post-World War II era. In its aftermath, nation-building took on a larger focus of American foreign policy. This was part of a strategy aimed at deterring Saoviet expansion, protecting American interests and spreading economic and political ideas of liberalism across the world.

However, in recent years there have been serious challenges to this liberal concept by those who question the efficacy or purpose of international aid. And these claims aren’t entirely illegitimate. Governments and NGO’s alike have pursued many different programs of varying success and failure.

For example, in delivering health outcomes, they have been successful in eradicating many forms of diseases, improving the standard of living for millions of people and meeting the sustainable development goals set by the United Nations.

Despite the success of these initiatives, other costly development programs aimed at facilitating economic progress have failed. One example is what was once a highly touted program in the international community known as PlayPump. It set to install over 4,000 water pumps across Africa, from 2006–2010, but the result was anything but perfect.

A 2007 UNICEF report found pumps abandoned, broken, unmaintained. “Of the more than 1,500 pumps that had been installed with the initial burst of grant money in Zambia, one-quarter already needed repair.” The Guardian said the pumps were “reliant on child labour.”

PlayPump is a microcosm of a larger problem with international aid that needs addressing. A great deal of money is being spent to develop economies but they haven’t developed. In fact, since 1970, more than one trillion dollars in aid has been sent to Africa, but real capita per person on the continent hasn’t changed.

Today most African markets are lacking trust, market information and market coordination, which lowers market transaction and thus leading to high transaction costs. Countries in Africa can’t develop if they are reliant on foreign money. Like all the other countries they need fair markets.

Not too long ago in places like Zimbabwe, the examination of the stars and the size of the colour of the moon to predict weather patterns was anything but an ancient practice.

“We’d feel the zephyr, the breeze, and know what the weather forecast would be the following day. We’d check the stars, and the size and colour of the moon and know whether the coming season would bring enough rains.”

However, the recent introduction of digital technologies such as mobile phones across Africa now means that farmers have access to market data. Instead of looking at the moon, they can now pay a small fee to download weather data and to prepare their yields accordingly.

Digital technology is connecting people through social media and providing citizens with political liberalization through access to international news sources. It is also reducing information asymmetries in markets and offering itself as a useful tool for economic liberalization. 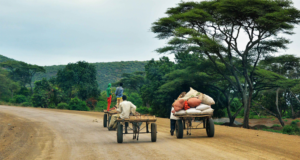 Ethiopia: For too long farmers have come to exchanges blind; not knowing whether there is demand for what they have supplied. Quote and pictures sourced from DataImpacts.

It is not just access to data through technology but the creation of markets that will further this process of economic liberalization. This is the case because exchanges serve as an important forum for facilitating and encouraging competition among buyers and sellers by creating a platform in which parties realize the real value of commodities in the market. Moreover, these asymmetries are more advantageous to more powerful market actors who are more likely to be well off relative to their trading counterparts.

The best example can be found in the Ethiopian Commodity Exchange, a transformational market that has drastically increased the standard of living for farmers and increased efficiency by getting more products to market. 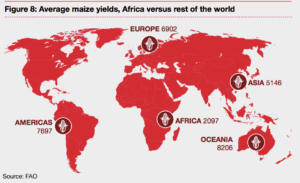 African yields compared to the rest of the world. Courtesy of the FAO and a PwC report.

African farms are currently undercapitalized and highly inefficient. Thus, the Ethiopian Commodity Exchange (ECX) was created in 2008 to solve these problems. The ECX is a platform for buyers, traders and regulators under a single market allowing for the exchange of Ethiopian commodities. To ensure quality standards and easy access to markets there are 65 warehouses across the country where commodities are graded, stored, bagged and then traded on the exchange. Moreover, information asymmetries have been reduced through SMS where farmers now receive current prices on their mobile phones in addition to the weather.

Today the exchange trades about $1.2 Billion of Ethiopian commodities per day. In a country like Ethiopia where a majority of the population are small sized farmers, this is transformational. For example, a PwC report found that coffee farmers now receive 60% more for their coffee beans. Moreover, the warehouses, where commodities are stored and tested, have helped many farmers cut post-harvest losses.

The importance of exchanges cannot be understated, and they have been cited in a report by Gonzalo and Figuerola-Ferretti as essential. “Well-functioning agricultural exchange platforms disseminate relevant information to all decision makers and thereby facilitate price discovery and price risk management.” A later report, by Easwaran and Ramasundaram, added that “such institutions may, therefore, be of great importance for optimal resource allocation.”

This matters because optimal resource allocation means a reduction in the possibility of short-term famines. As the Nobel Peace Prize economist Amartya Sen put it in his book Poverty and Famines: An Essay on Entitlement and Deprivation, famine does not necessarily stem from the lack of food supply but the ability to acquire food from the market.

For example, in 1984 Ethiopia saw one of the worst droughts in its history in which one million people died from starvation. What is extremely surprising is that Ethiopia had a food surplus that year. Yet, there was still a famine because the people in the northern regions could not access the food surplus in the southern regions.

As it stands, the US spends about 16% of its foreign aid budget on humanitarian aid. Some programs run under that budget have their merits, like refugee aid. However, the creation of markets should alleviate the need for greater foreign money and in the process create sustainable states. Especially in agricultural markets, the goal should be independence. Thus, optimal resource allocation, via markets can reduce the likelihood of severe famine and volatile shifts in price.

The role that institutions and markets play in developing economies is crucial. In large part (or to some degree) we can concur that market policies were instrumental during the industrial revolution. In Africa, markets are underdeveloped and the ECX was the first of its kind on the continent, not counting the exchange in Johannesburg. The creation of fair markets will be instrumental for the growth of the continent. The key to its economic liberalization cannot be more international money and grandiose ideas drafted in the halls of Washington and Brussels. Africa doesn’t need more PlayPumps, it needs better markets.