Hit enter to search or ESC to close
COVID-19Creative WritingHomepage

Kim Jong Un, the Ceiling, and Friendship in the time of Corona 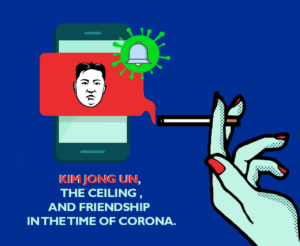 The notification pops on my phone and it’s one in the morning, and the screen lights my bedroom ceiling, and I can see the shadows of my shoes and my clothes on the floor. I haven’t closed an eye, it’s not like I’ve been trying, just looking out into nothing, my room smells of cigarettes.

I turn around and grab my phone, which has now become a literal extension of my arm, and the touch of metal against my palm is nicotine. I look at the text and smile. The chat my friends and I have is regularly strewn with random questions at random hours of the night. I google “Kim Jung Un,” and I see an avalanche of articles, all claiming the truth and all contradicting each other: “Dictator dead – and the Chinese media claims it!” “Kim Jung Un’s close friend prays for him” “Kim Jung Un seen in a train in the east of North Korea.”

“Who knows” I text back. And this message becomes one of many, ricochet-like until two in the morning and I smile. I smile because I know the reason I haven’t closed my eyes yet is because I was doing the same thing last night and the night before. I was smiling in my room at two in the morning surrounded by cigarette smoke, the illuminated ceiling ,my sole physical companion.

It’s been weeks, months, and I now rule over the empire that is my bedroom. Not one ounce spared, from the stained carpet to the books on the floor. I wake up every morning in the same kingdom, and it’s getting kind of boring, and I’m sick of my attempts at watercolour paintings and I hide myself from Zoom because Big Zoom is watching you.

But every night, I forget the burden of my crown for a few hours, and I forget the digital shadows, I filter them and I hear my friends’ unsubtle jokes and see their red cheeks over a FaceTime screen, and I smile.

Because once you see their face, and they greet you with sentences that are so inherent to who they are, once they tell you about the article they read or the podcast they listened to, once you hear what got them excited today, you forget about the metal contours that limit your interaction, you forget about the pixels and the bad wifi connection.

I’ve danced alone in my room with three other people, music coming out of my computer, my windows open, but I wasn’t alone.

I’ve written a poem alone in my room with two other friends, ink on paper, on how one’s showers are louder than dinner conversations and how windows are now reflections of past wild evenings and wilder mornings, but I wasn’t alone.

I’ve had a drink alone in my room, with an entire group of friends, fantasizing about impossible summer plans and parties to come, but I wasn’t alone.

But we won’t be alone. Because there are always times where we descend from our thrones, where we don’t have to rule over the little space we know too much, and we’ll pick up a pen, a keyboard, a screen, we’ll see a message and we’ll forget about the pen, the keyboard, the screen.