A Review on Fate: The Winx Saga 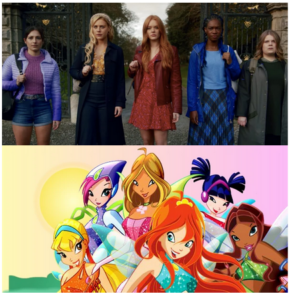 Magic. Hidden paternity. A boarding school full of angsty teenagers. Fate: The Winx Saga has all the ingredients for a classic, melodramatic teenage drama. If you’ve ever watched any TV show ever, you’ll probably be able to predict the plot a mile away. So how did it make #1 most watched series on Netflix? Honestly, I have no idea. Let’s dive in.

As an avid fan of the original series, The Winx Club, the first thing to address is how wildly distant the new show is from the original. The basic premise remains the same across both versions: Bloom, an ordinary girl, discovers she’s a fairy. She is then whisked away to Alfea, a boarding school, where she makes a group of friends who make up the ensemble cast.

However, the portrayal and aesthetic of this basic plot are wildly different, as are most of the main storylines and character arcs. In the Netflix series, the cartoon’s teenage witch villains are replaced with the “Burned Ones”, grotesque creatures who live in the forest outside Alfea and are controlled by unknown evil forces. Another considerable change is that Stella, Bloom’s best friend in the cartoon, is now her nemesis and Bloom’s main love interest’s ex, creating an entirely new subplot, vastly different from the cartoon. In terms of aesthetic, the new series takes the original colorful, sparkly cartoon and makes it decidedly darker and edgier, similar to CW’s transformation of the comic, Archie, to their Riverdale series.

From the first five minutes, it is clear that beyond the simple set-up, the strongest links the Netflix series has to the original is the characters’ names–– but that’s not even true in the case of Flora, unnecessarily renamed Terra in the live action. However, at least Terra, along with her roommate Musa, have some of the only original plotlines in the entire series as independent characters and their own initially awkward friendship. At the same time, it’s important to note that both Terra and Musa were cast as whitewashed versions of their original POC characters, causing outrage among many fans.

In regards to the rest of the ensemble, damaged princess Stella, angsty boyfriend Sky, and just-a-regular-girl Bloom follow the same trope-y plot lines one would expect from a Harry Potter/Riverdale mashup for teenagers. Bloom and Stella’s redeeming note is that the actresses managed to add an invigorating twist to otherwise boring characters. Sky, Stella’s ex and Bloom’s love interest, generally does the opposite, in a way following true to the cartoon in that he has no character and could honestly be replaced with a cardboard cut out and things would still work out fine, both in the cartoon and the Netflix series.

Aisha, the last member of the Winx suite and Bloom’s band of friends was the most underwhelming portrayal. She’s the only Black girl with a speaking role and yet she got exactly zero plot lines outside of her relationship with Bloom. In the entire six episode series, you could count the times her lines didn’t have something to do with worrying over Bloom’s bad decisions, with her remaining lines devoted to her acting as Musa’s wingman.

The unsung stars of the original cartoon are definitely Icy, Darcy, and Stormi, a coven of witches determined to bring down Bloom and her “stupid little friends”. With their incessant need to “rule the school” (think bigger ladies), and tendency to turn members of the Winx into monsters and frogs, the Trix, as they are known, were fan favorites in the cartoon. Sadly, they didn’t even make the TV show, instead being replaced by the “Burned Ones” and Beatrix, another Alfea student, who is underwhelming both in her character and the play on her name resembling The Trix. Even more, the actress that plays Beatrix is roughly 5 years younger than the rest of the cast, and it shows–– it’s difficult to take the most visible antagonist seriously when she looks like the annoying little sister of her co-stars.

Beyond a 15 second dialogue and a camera pan over a globe of the Otherworld in the first episode, Fate has an abysmal amount of world building. Bloom discovers an entire planet full of fairies and sword fighters and royal kingdoms and she doesn’t take the opportunity to find out more? Fleshing out this new world would have made the world more real to viewers and could have drawn a dedicated fan base. Yet it seems as if this Otherworld of fairies and magic exists only to the barest extents of the plot, hastily sketched out with sometimes dubious logic to fulfill certain plot points and nothing else.

Fate misses out on a golden opportunity to explore what a world with magic and technology would look like, where water fairies use magic to win at beer pong and light fairies use their powers to make their own ring lights for the perfect Instagram selfie. The series failed at incorporating elements such as attention to detail and worldbuilding used beyond propelling the plot forward which make shows like Game of Thrones, the Harry Potter franchise, and even Avatar: The Last Airbender so beloved.

On the other hand, Fate: the Winx Saga is full of brooding teenage romance, betrayals, and (spoiler) Bloom grows some epic wings made of fire at the end. So, if you’re looking for a mindless show to binge with fun special effects, lots of hot characters, and a mildly interesting plot, this is the show for you. But if you’re a fan of the original cartoon, The Winx Club, you might want to spare your precious childhood memories and run in the opposite direction– unless, like me, you have a perverse need to see this show realized in its full corny and melodramatic Riverdale-esque self, if only to have material to trash talk it.