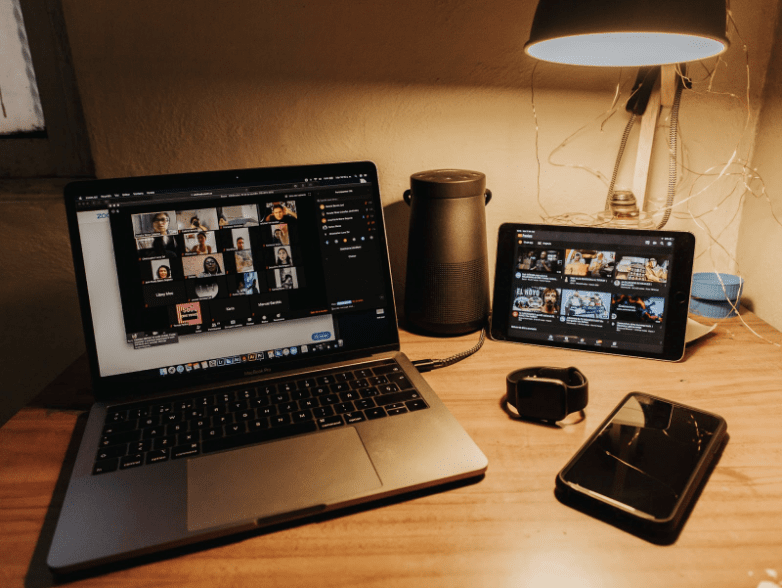 “Ad” me on Messenger

Home » “Ad” me on Messenger

“Oh m’god,” Carla rolled her eyes, tracing the motion of an old, analog clock, “how on earth you find that funny is beyond me.” Of course, her eye-rolling technique did not mimic the timepiece exactly—neither in its rotational speed, nor in its modern unintelligibility—but it did at least share its immediate metaphorical potential.

The left corner of Carla’s lips curled upwards, betraying yet another one of her short-lived protests against her classmate’s fickle humor.

“Ok, but go on,” her wicked smile shone through the screen in all its glory for Daniela to marvel at.

“And so the molten lava cake spills, like, all over the guy who cheated—”

“Wait, the fiancé cheater or the fish competition one?

“No, the chess cheater.”

“And so it turns out that they actually had the chef build and place a pump inside—wait—I’ll see you in thirty seconds.”

Carla watched Daniela’s face freeze and blur out on the screen, before being replaced by an underwhelming advertisement about discounted tacos for university students. Her mind blocked out the depressing voice that reeked of fake optimism, and her finger instinctively reached for the screen’s upper right corner to slide the volume down and back up again after the half-minute.

Their conversation resumed as usual, pausing every thirty minutes for a thirty second ad about a vintage store pop-up or tacos on promotion. Many ads were run by Messenger itself, asking its users to switch to an ad-free premium version. Carla let her eyelids descend during each break, leaning her head back on the cool leather of the sofa. She found herself bored, her gaze unwavering from the whirling ceiling fan, falling into a hypnotic trance. She was thankful that the first five minutes of calling were ad-free. Whatever they could get, she thought. Finally, the call clicked, and she heard her friend’s voice come through again…

The two had met at a thrift store while on separate solo trips to Lisbon, so naturally, much of their conversation flowed around their latest adventures—Carla in Dallas and Daniela in Chicago. Unsurprisingly, the bulk of their advertisements targeted their taste with alarming accuracy. Although Carla did not mind, it was possible, as the friends previously discussed, that their Messenger video call had entire transcripts of their conversations saved somewhere.

“I mean, I was literally talking about a pair of cream, hand-cobbled boots with crossovers along the side, right?” Daniela exclaimed at her screen. She had tweaked her location settings several times prior, but each ad still managed to identify her location with pinpoint accuracy; each time she traveled one zip code over, the ads would adjust their sales pitches accordingly.

Carla did not always find the ads bothersome, and even appreciated them on occasion. A pop-up about a flash sale of antiques and vintage collectables held during a long weekend had led her to a gem of a retro, punk jacket that she still wore on a weekly basis years later. Downtown was full of similar festivals, and even an enthusiast like she did not always have the proficiency of navigating non-perpendicular, tented streets for the best finds. One could only wander for so long before the multicolored flags began to blend together. Besides, ads also served as conversation starters in case the two had already exchanged their university routines in a quarter hour.

So what if the “cloud” knew about her life? Her sexuality, her political views, her hobbies were already out. It was just offering an individually-tailored experience, after all, and she was just identifiant 204943000 for all the algorithm knew. If anything, the ads were just tiresome after years of “buy-it, own-it” consumerism. Perhaps for her youngest brother, born into the digital age, it was all that he would ever know.

Yet Carla could not shake the nagging feeling that the whole situation was a bit absurd. It felt strange that tacos, their inside joke, were injected into their video calls through ad interruptions. It was as if a third member of the conversation—an omnipresent bystander—felt the need to affirm its belonging by recycling old jokes without understanding the punchline.

Sunday evening rolled around. As she was folding laundry, Carla got a notification to join a video call from her family’s group chat. Maybe it was by accident, she thought, and pressed her phone’s power button to silence the invitation.

She picked up the call the second time it came around. She squinted and saw floating icons of her parents and three relatives—recognizing her grandfather at the Sunrise retirement home, smiling with a young, chocolate labrador in his arms.

“Grandfather Noah!” she exclaimed. It felt wonderful to see him again. Her other family members seemed equally elated: her mother was holding flowers up to the camera, her aunt was showing a hand-drawn card, her cousin was gazing so intently…

“Since when do you have a puppy? What’s its name, when can I visit?” she beamed.

“Oh Carla, I’m so pleased to see you this happy,” he whispered, holding his wife’s hands. Over sixty years strong. Zooming in on their faces, Carla saw two thin tubes emerging from her grandfather’s nose.

“I’ve been so blessed to have a granddaughter like you in my life.”

Suddenly, in her mind it clicked.

Then the call clicked. Her family’s faces froze and blurred, and the voice of an optimistic spokesperson played through her speakers once again. By the time she reconnected, she could see only her grandmother’s solemn expression.

“I’m sorry, Carla, but please remember that you brought him so much joy…”

She held her face in her hands and wept.