Paris is in the sky

By Elisa VovosFebruary 4, 2020 No Comments 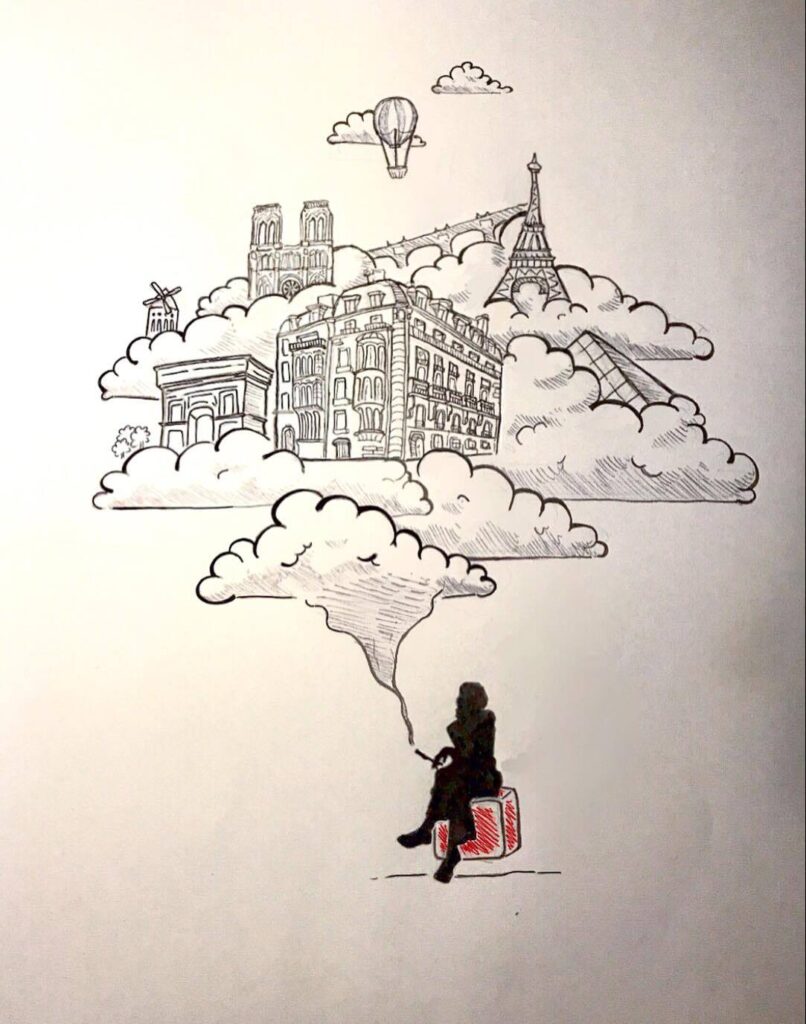 Paris is in the sky and we’re sitting here, on this red suitcase, smoking. In front of us, a plain of concrete slabs. The heightened lights of the city prevent us from seeing the end of the plain. Above the lights, a series of windows, some opened, some closed, and through these windows the shimmering lights of kitchens, living rooms and bedrooms. The mirrors inside reflect the lights of passing cars and buses, and it is as if the buildings float on a cloud of red, green, yellow radiation. Nothing is certain, the architecture fades away, and Paris is in the sky.

Paris is in the sky and we’re sitting on the red suitcase, with red eyes and red lips, red cheeks and red ears, oppressed by the cold. The smoke of our cigarettes goes up and dances with the colourful clouds of the city, and all our worries are gone, just like our thoughts, gone, just like our soreness, gone. We don’t think about running through the streets, bags in hand,  heart palpitating. We don’t think about the missed bus, the waiting, the cold air that comes furiously fight our skin and dry our lips. We don’t think about what waits for us tomorrow, the mornings to come, the silly sadistic alarm clocks and the brutal presence of the night sky when we wake up.

Paris is in the sky and we’re sitting on the red suitcase, behind us the train station is roaring names of places and people and numbers and it doesn’t sound like a song. Under the ground, people walk to take other kinds of trains and they go in and out and sometimes they scream at screens because stations are closed and they go up and down and they walk so fast and their footsteps accelerate, and it doesn’t sound like a song. And here, with Paris in the sky, a man stops to ask us for money and we give him a coin, he goes away and comes back and he talks to us; he asks for a cigarette, and we give him a cigarette. He’s got no train to catch, no running to do and he sees Paris, and he says it’s in the sky.

In a few minutes, the train station is going to announce our track and we’ll have to put our cigarettes out. The smoke will retrieve itself from the clouds of city lights. We’ll forget about the sky, and Paris in it. We’ll go back to a place that’s also a number on a list. We’ll wake up to cruel alarms clocks. We’ll see the night sky, and it won’t sound like a song.

But for now, we’re sitting on this red suitcase, and Paris is in the sky.