Hit enter to search or ESC to close
Campus LifeHomepageOpinion

By The Sundial PressSeptember 19, 2021 No Comments 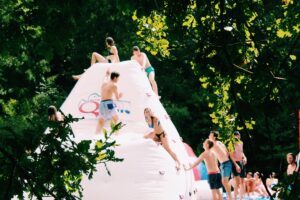 I thought the WEI was overpriced.

To be completely honest, I thought that 120€  for one night and more than 16 hours on a bus were excessive. However, my grandma gifted me the trip for my birthday and I had not been to the beach in a while, so I told myself that I could work ahead and enjoy a weekend outside of Reims. As the days approached, I talked to plenty of people that were just as hesitant as me. For some of us, our hesitancy was worth a conversation; for others, their hesitancy was worth a 100 euro loss. To each their own.

As the flames of Covid-19 slowly extinguished in France and our student life was finally reborn from its ashes, I still thought that a “Weekend d’Intégration” was a great way to feel like a student at a French university again. For the international students that were as clueless as me, the WEI is actually a very French thing. In fact, the first WEI recorded happened in Paris in 1989 in the École des Mines de Paris. Funnily enough, some WEIs used to get so wild that the Assemblée Générale passed Article 225-16-1 in 1998 to regulate certain aspects of the parties happening back then.

Usually done by the BDE of each Grande Ecole, WEIs are organized for the incoming students at the start of the university year. It is a time for relaxation, socialization, and a breath of fresh air before midterms start. Needless to say,  even if we are not the incoming students, after such a year our cohort deserved one of these for ourselves. Or so I thought.

I do not think anyone expected YikYak to drown our Facebook feed so fast and suddenly. After months of absence, even for 2As used to the toxicity of this forum, its return revealed the almost-forgotten, dark face of the Sciences Po student community: criticism, pettiness, and cowardice. It is sad that the WEI and the BDE became the first, surely not last, target for YikYak’s outrage.

YikYak did what it does best, it dehumanized the BDE members. The forum turned Yasmina, Oscar, Emma, Christophe, Joseph, Irini, and the whole team into an institution expected to run things like they had trained and practiced for years. What the student body fails to understand is that they are as young and as human as every student on campus. Their deal for the WEI was in huge part managed by the partnership they have with WEI&Go, which dealt with the buses, the location, and the activities. They did not expect three buses from three different companies to show up the night before, late and uncoordinated. They prepared for a party that would start at 11 pm but did not plan a power outage that the technicians from the camp had to fix. They were forced to finish the party at 2:30 am because their staff was on its last legs after welcoming everyone, setting up every activity, brunch, and dinner. Let us not forget that they were the last ones to go to sleep after cleaning up and the first ones to wake up to set the brunch.

Surely they did not expect a wave of petty assistants complaining about it after a day of swimming in the lake, throwing paint and foam at each other, and enjoying the sun.

We should talk less about YikYaks and more about YikYak itself. The impact that this forum has on our conversations and interactions as students should not be downplayed. Beyond the rare occasions where a funny joke is posted, YikYak is undesirable.

It is accusatory –  it targets people and exposes their names in a 2.3 thousand-member group. It is pervasive –  its comments drive plenty of conversations that take place within our community.

It is stigmatizing –  many people are only known for what a YikYak said about them regardless of their role in the student community. This is particularly magnified by our superficial knowledge of people after a year of online-learning.

It is petty –  people exploit mistakes, rumors, and fake impressions to insult, shame, and spread false declarations on students.

With this being said, I keep wondering: Why has it prevailed for so many years? Why do we keep commenting, liking, and engaging with the same forum we despise? What does YikYak reveal about our student community?

As a scapegoat for people’s rage, the BDE members have had to deal with personal, demoralizing comments since campaign week. They have had to address these comments in their meetings, encouraging each other to “rise above it.” Imagine if the time they spent discussing whether to answer the YikYaks or not was spent planning their next big project.

Now the BDE is certainly not untouchable – as any democratically elected group, they should be held accountable. But if you want to know where your money went, I can assure you that the treasurer has a better answer than YikYak. Personally, it is very hard for me to grasp how the same community that advocates against racist and sexist social media attacks on activists, athletes, and public figures celebrates a forum where we attack each other as if we will not be sitting next to each other in class the next day. This time the target was the BDE, but in a week it will be someone else. Just like that, we are entertained in this circus of clapping seals and denigrating comments. If there is something I can tell you, YikYaker, your anonymity is not empowering, it is cowardice. Your hate is not shared, it is unwelcome. And your pettiness is not justified, it is sad.