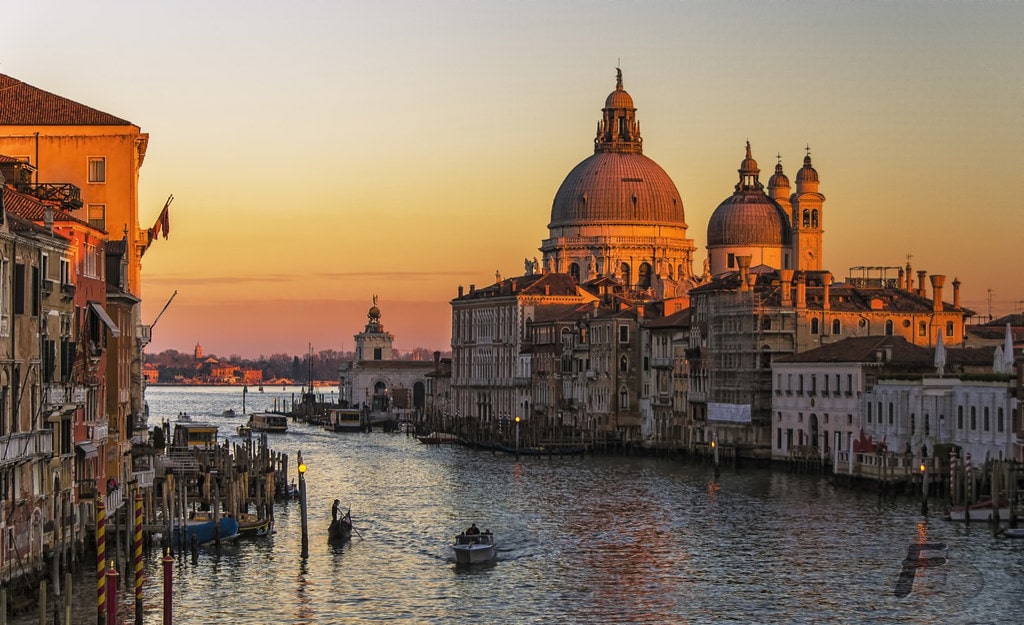 An Escape from Venice 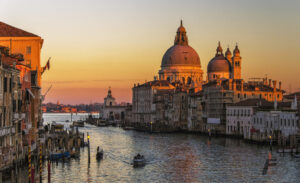 The little girl with ocean eyes looked up at her grandmother as they walked through the narrow streets that weaved into the beating heart of Venice. They turned right and began to walk beside a canal – water droplets danced on the surface and hopped onto the girl’s face, and she laughed gleefully as she watched them rise in the air and dissolve like bubbles popping in slow motion. Her grandmother smiled and said, “Come on, Cordelia. Let’s look around before the tide rises.”

Saint Mark’s Square was so expansive for little Cordelia, who looked around into the wide world with wondrous eyes that tried to absorb everything before it disappeared. They strolled calmly into the Basilica and were instantly engulfed by the golden light that emanated from the domes above. The figures of angels and saints on the walls were engaged in heated conversations, their small shrilling voices amplified by the dead silence of the empty cathedral. Cordelia and her grandmother walked around admiring the golden altar, the arches, and the masterful paintings and mosaics that had withstood the passage of more than a millenium. An awe-inspiring work of human perfectionism that had defied the city of water’s unstable ground.

They walked out and saw the pink and white patterns of the Doge’s Palace that moved and rearranged itself with the rhythm of the bobbing gondolas knotted to the dock. They made their way to a street dotted with little antique shops, walking on damp marble stones that rose and fell with every step they took, a moving dock that rested on the water and allowed them to walk on the sea. The colorful carnevale masks grinned from the displays in the window, turning to watch the two walk past and whisper amongst themselves, like a mismatched mosaic of rainbows in the dark stores.

They entered a ferry full of tourists, not in their white sunscreened faces nor bearing heavy black cameras, but each one with their suitcases, knee-high colored rain boots and somber expressions. Venice going underwater, yelled the bold letters on the front page of a newspaper that one of the tourists was reading. The mayor frowned from a picture captioned “corrupt!”.

They got off the ferry and passed an artist painting a round canvas by the water, muttering in annoyance as he added a final brushstroke to yet another cherub who cheekily flew off the canvas, revealing the blue background of the painting. They passed a man with a viola, who was trying to stop the pages of his music from flying away, but they stubbornly allowed themselves to be carried off by the wind, the pages flapping open and closed like the wings of a dove.

Gondolas glided through the still canals without making a sound, manned by gondoliers entranced in the never ending cycle of dipping their oar in and out of the water. Every once in a while, the two would pass a gondolier rowing calmly above the water, as the gondola went from floating on the water’s surface to a few centimeters above, until it rose so people could look at it from outside their windows. The invisible breeze gently carried the gondolas higher and higher, as they passed over the roofs of the city and the gondoliers rowed them further upwards into the clouds, where together, they looked like a flock of birds migrating to warmer, happier weathers.

The ground Cordelia and her grandmother walked on became water, as small puddles formed until the water reached their ankles, then their knees, then their waists. The sun was setting into water that was rising, the two drawing closer towards one another like magnets. The sun was submerged by the water and the city began to as well, gradually transforming into an underwater world in which the buildings became sea castles, cathedrals became populated by the Adriatic’s sea creatures and a blue instead of golden light illuminated the domes. Cordelia and her grandmother swam in the tranquility of the sea and dove deep down to see the underwater city’s buildings, beautiful yet somber in the ocean graveyard. They swam back up and floated on the surface, gazing at stars that shone more brightly by the second. They began to levitate as the wind took them to the safety that lay beyond the stars.

It brought them up to a city built in the sky, with gondolas gliding on canals made of clouds and the same pastel palaces and golden sunsets suspended in the air.